Immunotherapy after surgery helped reduce cancer recurrence in patients with urothelial cancer of the bladder or other sites in the urinary tract that had invaded the muscle and therefore posed a high risk for recurrence, according to clinical trial results presented at the American Urological Association (AUA) annual meeting in May.

The University of Maryland Medical Center celebrates the groundbreaking of a nine-story patient care tower – the Roslyn and Leonard Stoler Center for Advanced Medicine – that will become the new home of the University of Maryland Marlene and Stewart Greenebaum Comprehensive Cancer Center. The $219 million building will enable the cancer center to provide the most technologically advanced, integrated care to cancer patients throughout Maryland and the region well into the future

Ten years ago, Tom and Kari Whitehead came to Children’s Hospital of Philadelphia (CHOP) looking for a miracle. Their 6-year-old daughter, Emily, had relapsed in her battle with acute lymphoblastic leukemia (ALL), after many months of unsuccessful chemotherapy and a disease that had progressed so rapidly that she was ineligible for a bone marrow transplant to treat it. Her family came to CHOP in the hopes that Dr. Stephan Grupp, a pioneer in the field of cellular immunotherapy, could provide the miracle they were looking for.

Scar-like cells that make up a sizable portion of malignant pancreatic tumors and shield these cancers from immune attack are derived from mesothelial cells that line tissues and organs, a new study led by UT Southwestern researchers suggests. The findings, published in Cancer Cell, could offer a new strategy to fight pancreatic cancer, a deadly disease for which no truly effective treatments exist.

Cardamonin — a natural compound found in the spice cardamom and other plants — could have therapeutic potential for triple-negative breast cancer, according to a new study using human cancer cells. The findings also show that the compound targets a gene that helps cancer cells elude the immune system.

This special edition of MD Anderson’s Research Highlights features presentations at the Society for Immunotherapy of Caner 36th Annual Meeting.

Studying mice, researchers at Washington University School of Medicine in St. Louis have developed a method of stem cell transplantation that does not require radiation or chemotherapy. Instead, the strategy takes an immunotherapeutic approach, combining the targeted elimination of blood-forming stem cells in the bone marrow with immune-modulating drugs to prevent the immune system from rejecting the new donor stem cells.

Combining the immunotherapy agent durvalumab with the chemotherapy agents pemetrexed and cisplatin or carboplatin may provide a new treatment option for patients who have inoperable pleural mesothelioma, a cancer of the tissues lining the lungs, according to a phase II clinical trial led by researchers at the Johns Hopkins Kimmel Cancer Center and the Bloomberg~Kimmel Institute for Cancer Immunotherapy.

CRI will bestow the 2021 William B. Coley Award for Distinguished Research in Basic Immunology on four mRNA vaccine scientists followed by roundtable on origin and future application to cancer treatment.

In a breakthrough for the treatment of aggressive solid cancers, researchers at Children’s Hospital of Philadelphia (CHOP) have developed a novel cancer therapy that targets proteins inside cancer cells that are essential for tumor growth and survival but have been historically impossible to reach. Using the power of large data sets and advanced computational approaches, the researchers were able to identify peptides that are presented on the surface of tumor cells and can be targeted with “peptide-centric” chimeric antigen receptors (PC-CARs), a new class of engineered T cells, stimulating an immune response that eradicates tumors.

A new therapeutic era has been ushered in with Adoptive Cell Immunotherapy, which uses patient-harvested T cells genetically engineered against tumor-specific targets.

New findings from a large study led by researchers at Yale Cancer Center shows the addition of the drugs oleclumab or monalizumab to durvalumab improved progression-free survival for patients with locally advanced non-small cell lung cancer.

Using a virus that grows in black-eyed pea plants, researchers developed a new therapy that could keep metastatic cancers from spreading to the lungs, as well as treat established tumors in the lungs.

A new study at Tel Aviv University found that eosinophils – a type of white blood cells – are recruited to the battle against cancer metastases in the lungs.

The gut microbiome can impact us in a variety of different ways, from our metabolism to our mood. Now, NIBIB-funded researchers are investigating if a fiber-based gel can restore beneficial microbes in the gut to enhance the efficacy of immune checkpoint inhibitors, a type of cancer immunotherapy treatment, in mice.

A study of a geographically, clinically, and socioeconomically diverse, nationally-representative sample of US households – including both adult patients and caregivers of children with food allergy – found that 72 percent did not know what oral immunotherapy (OIT) was prior to the survey.

The University of Texas MD Anderson Cancer Center and Bellicum Pharmaceuticals, Inc. today announced a global option and license agreement covering certain intellectual property and technology rights regarding Bellicum’s CaspaCIDe® (inducible caspase-9, or iC9) safety switch and related technologies, and the use of rimiducid, an agent used to activate the safety switch. 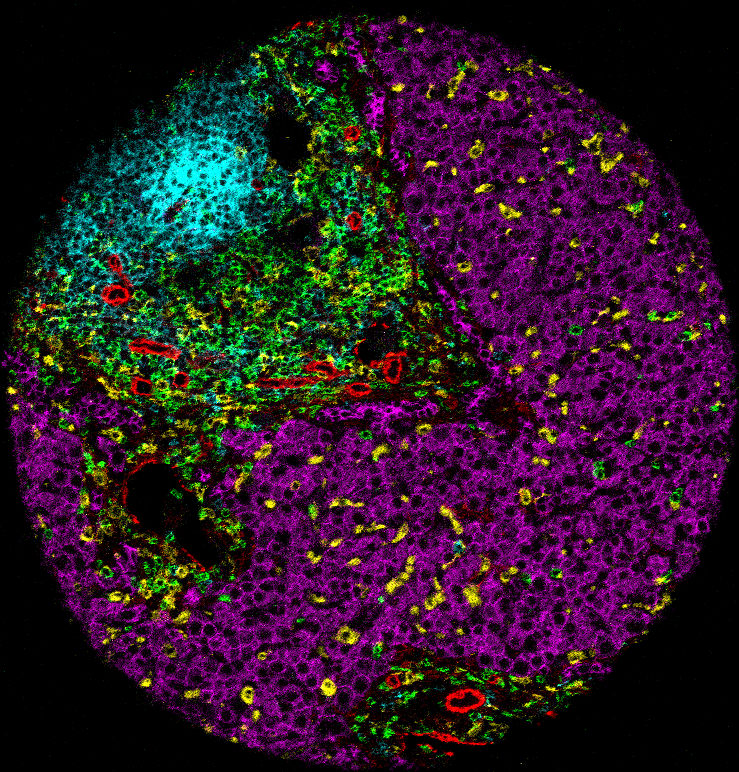 A combination of the kinase-inhibitor drug cabozantinib and the immunotherapy drug nivolumab can make curative surgery possible in some liver cancer patients who would normally not be considered surgery candidates.

SEATTLE — July 7, 2021 — Below are summaries of recent Fred Hutch research findings and other news.

Researchers at McMaster University have developed a promising new cancer immunotherapy that uses cancer-killing cells genetically engineered outside the body to find and destroy malignant tumours.

Many people don’t realize that the trillions of bacteria, viruses, and fungi residing within the gastrointestinal tract––collectively called the gut microbiome–– are connected to overall health, and specifically to cancer.

In a new study by researchers at Yale Cancer Center, combining the immunotherapy drug durvalumab and PARP-inhibitor olaparib with chemotherapy improved response to treatment for women with high-risk, HER2-negative breast cancer, including a subset of estrogen receptor positive cancers.

DALLAS – June 14, 2021 – Overweight cancer patients receiving immunotherapy treatments live more than twice as long as lighter patients, but only when dosing is weight-based, according to a study by cancer researchers at UT Southwestern Medical Center.

Pairing sky-mapping algorithms with advanced immunofluorescence imaging of cancer biopsies, researchers at The Mark Foundation Center for Advanced Genomics and Imaging at Johns Hopkins University and the Bloomberg~Kimmel Institute for Cancer Immunotherapy developed a robust platform to guide immunotherapy by predicting which cancers will respond to specific therapies targeting the immune system.

Reported in the current issue of Cancer Cell and led by Ludwig investigators Taha Merghoub and Jedd Wolchok at Memorial Sloan Kettering (MSK) and Charles Rudin of MSK, the study shows that cavity-resident macrophages express high levels of Tim-4, a receptor for phosphatidylserine (PS), a molecule that they surprisingly found on the surface of highly activated, cytotoxic and proliferative CD8+ T-cells.

Treatment with an immunotherapy drug following kidney cancer surgery, prolonged disease-free survival rates in patients at high risk for recurrence, according to an interim report of a phase 3 clinical trial of adjuvant immunotherapy in this patient population.

As the first designated medical center in San Diego certified to offer this type of immunotherapy, UC San Diego Health will begin treating patients this month.

A Ludwig Cancer Research study has discovered how to revive a powerful but functionally inert subset of anti-cancer immune cells that are often found within tumors for cancer therapy.

Led by Ludwig Lausanne’s Ping-Chih Ho and Li Tang of the École Polytechnique Fédérale de Lausanne, the study describes how an immune factor known as interleukin-10 orchestrates the functional revival of “terminally exhausted” tumor-infiltrating T lymphocytes (TILs), which have so far proved impervious to stimulation by immunotherapies. It also demonstrates that the factor, when applied in combination with cell therapies, can eliminate tumors in mouse models of melanoma and colon cancer. The findings are reported in the current issue of Nature Immunology.

SEATTLE — May 4, 2021 — Below are summaries of recent Fred Hutch research findings and other news.If you are covering news at the upcoming American Society of Gene & Cell Therapy, American Society of Clinical Oncology, or other conferences, feel free to reach out to our media team for help sourcing experts: [email protected]

The combination approach uses immune checkpoint inhibitors with ATRA, a safe medication that is widely used to treat leukemia.

Penn Medicine and Children’s Hospital of Philadelphia (CHOP) will host a virtual event on May 6 and 7 that will bring together cell and gene therapy leaders from the two institutions and around the world to discuss the latest achievements in the field, novel strategies, and future developments and applications for chimeric antigen receptor, CAR, T cell therapy and more.

Researchers at the Pritzker School of Molecular Engineering (PME) at the University of Chicago have designed a completely novel potential treatment for COVID-19: nanoparticles that capture SARS-CoV-2 viruses within the body and then use the body’s own immune system to destroy it.