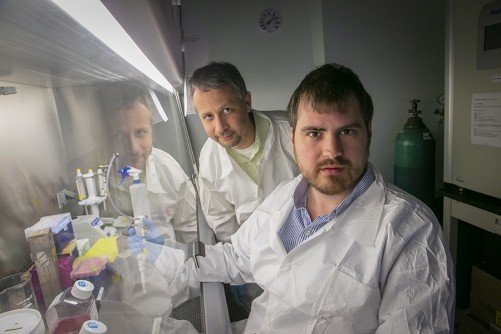 STONY BROOK, NY, June 24,, 2019 — A significant problem when treating cancer patients remains drug resistance, which often causes chemotherapy treatments to ultimately fail. Scientists in recent years have hypothesized that cell-cell differences, also known as cell heterogeneity, aides the emergence of drug resistance. Previous studies suggest that these effects depend on drug levels. To date this theory has not been experimentally tested. Now a new study published online in Nature Communications has tested this theory and yielded findings that may provide a path to reduce chemotherapy resistance.

Led by Gábor Balázsi, PhD, the Henry Laufer Associate Professor in Stony Brook University’s Laufer Center and Department of Biomedical Engineering, the research team engineered mammalian cell lines to test how chemotherapy drug resistance evolves in the context of cell-cell differences. The researchers developed a model system of two otherwise identical cell lines, except that synthetic gene circuits caused one of the cell lines to have higher heterogeneity. This enabled Balázsi and colleagues to mimic the evolution of drug resistance in the laboratory.

The researchers also discovered cells that are dormant, which neither grow nor die (called ‘persister’ cells) appear necessary for the evolution of drug resistance at high drug levels.

Their findings suggest that by combining current chemotherapy treatments with future methods that alter tumor heterogeneity, or by targeting persister cells, clinicians may be able to improve therapeutic efficiency by minimizing drug resistance.

“As we further advance this research, we may be able to evolve patients’ tumor cells in the laboratory as a powerful way to screen and optimize treatments,” projects Balázsi.

About Stony Brook University Stony Brook University, widely regarded as a SUNY flagship, is going beyond the expectations of what today’s public universities can accomplish. Since its founding in 1957, this young university has grown to become one of only four University Center campuses in the State University of New York (SUNY) system with over 26,000 students, more than 2,700 faculty members and 18 NCAA Division I athletic programs. Our faculty have earned numerous prestigious awards, including the Nobel Prize, Pulitzer Prize, Indianapolis Prize for animal conservation, Abel Prize and the inaugural Breakthrough Prize in Mathematics. The University offers students an elite education with an outstanding return on investment: U.S.News & World Report ranks Stony Brook among the top 40 public universities in the nation. Its membership in the Association of American Universities (AAU) places Stony Brook among the top 62 research institutions in North America. As part of the management team of Brookhaven National Laboratory, the University joins a prestigious group of universities that have a role in running federal R&D labs. Stony Brook University fuels Long island’s economic growth. Its impact on the Long island economy amounts to $7.38 billion in increased output. Our state, country and world demand ambitious ideas, imaginative solutions and exceptional leadership to forge a better future for all. The students, alumni, researchers and faculty of Stony Brook University are prepared to meet this challenge.  The National Institute of Health (NIH) has funded Balázsi’s drug resistance research for more than five years. The research for this paper was funded by the NIH’s National Institute of General Medical Sciences (NIGMS) MIRA grant, and the Laufer Center.