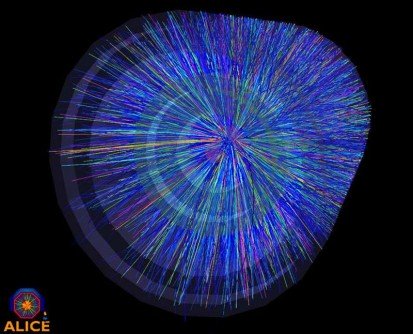 Pairs of sub-atomic particles may catalyze reactions that happened moments after the Big Bang.

Nuclear physicists smash ions together to create and study the soup of quarks and gluons thought to fill the universe milliseconds after the Big Bang. Experimental observations show that these collisions produce light nuclei such as deuterons, tritons, and helium. However, scientists disagree on how these reactions work. Some liken seeing these nuclei to finding “snowballs in hell,” as the high temperatures of the fireballs emerging from the collisions should “melt” the nuclei into their subatomic components and yet appear not to. Researchers now suggest a microscopic mechanism that might explain why the nuclei survive these harsh conditions.

Knowing how energetic heavy-ion collisions produce light atomic nuclei (with just a few protons and neutrons) will help to find a sought-after critical point. The critical point is the boundary between ordinary matter and the highly energetic form of matter consisting of quarks and gluons that existed just after the Big Bang. The results also help scientists learn how atomic nuclei are made in space.

The light nuclei that form in the fireball of particles resulting from the collision are continuously destroyed by the high temperatures and repeatedly re-created from flying protons and neutrons as the fireball cools. Researchers showed that a possible microscopic mechanism is a reaction in which protons and neutrons form deuterons in the presence of pions—quark-antiquark pairs—which act as catalysts for the reaction. The team simulated conditions similar to those of a recent experiment at the Large Hadron Collider at CERN. They carried out the experiment using the enormous ALICE detector, which precisely characterized the light nuclei production from collisions. U.S. scientists play a lead role in operating and upgrading this nuclear physics experiment at CERN. When the team included the microscopic behavior of the pions in the simulation, the calculated yield and energy spectra of deuterons were consistent with ALICE’s experimental observations.