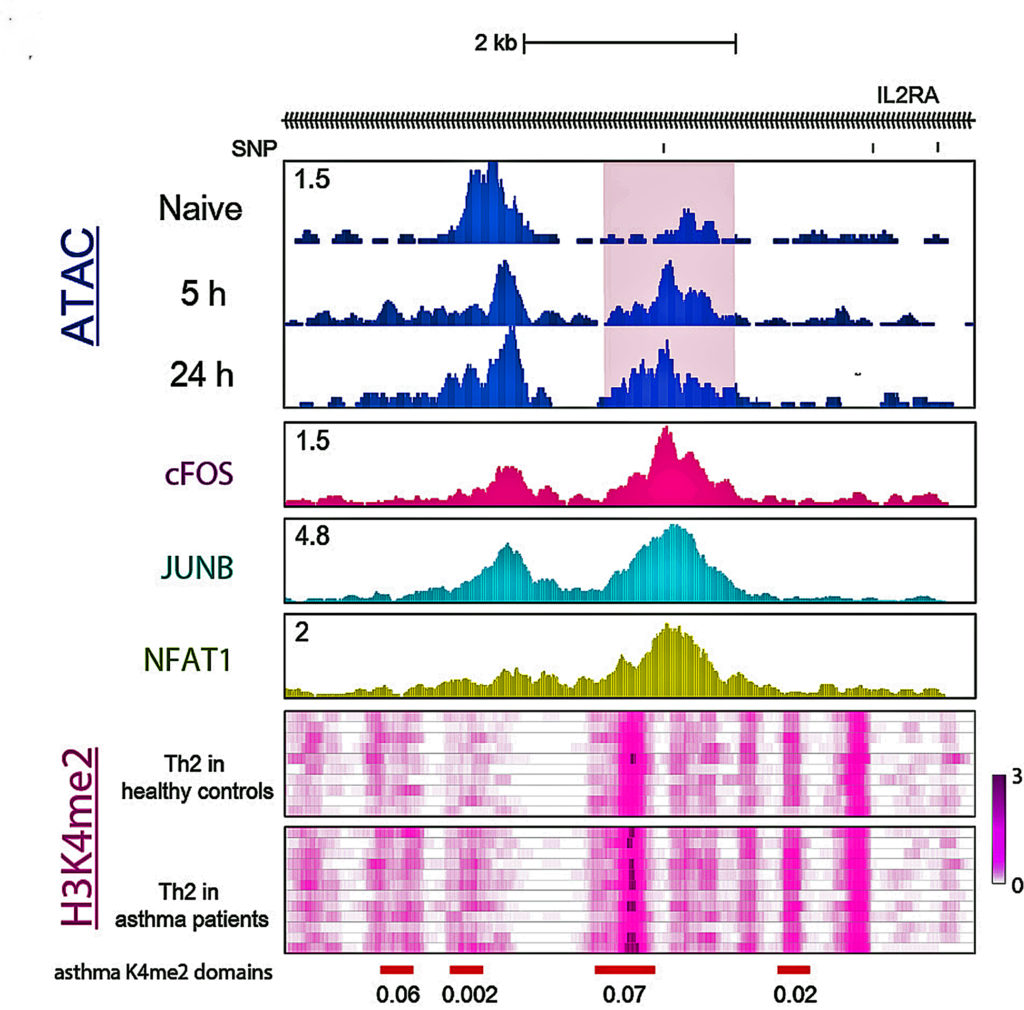 CINCINNATI – In a finding that could help lead to new therapies for immune diseases like multiple sclerosis and IBD, scientists report in the Journal of Experimental Medicine identifying a gene and family of proteins critical to the formation of mature and fully functioning T cells in the immune system.

T cells are an essential part of our body’s immune defenses, helping it fend off germs that cause immune disease, cancer and other illnesses.

Researchers at Cincinnati Children’s Hospital Medical Center who led the study say their experiments show the transcription factor activator protein 1, or AP-1, is critical to setting the stage for microbiological processes in the nucleus of early immature T cells that allow the cells to form correctly.

For T cells to activate and mature, the scientists say AP-1 must help open up chromatin—the twisting structure of DNA that winds around and condenses itself in the cell nucleus to control the cell. This stimulates a cascade of genetic and molecular programs that cooperate to form the cells. In experiments where the scientists inhibited AP-1 in early CD4 T cells, the chromatin didn’t open as it’s supposed to and the T cells didn’t form or function correctly.

What makes the finding significant is the AP-1 transcription factor accumulates and influences molecular processes at sites called risk loci. Risk loci are locations on the chromatin that are prone to genetic mutation and linked to multiple immune diseases, such as inflammatory bowel disease, allergies or the neurodegenerative condition multiple sclerosis.

“Our findings allow us to conduct new studies into what’s happening molecularly and mechanistically at these risk loci when the mutations are present and when they are not,” said Artem Barski, PhD, lead study investigator and scientist in the divisions of Allergy and Immunology and Human Genetics. “Our goal is to use this mechanistic knowledge to eventually develop protective vaccines, anti-cancer immune therapies or reduce pathologic immune responses like asthma, allergies, and autoimmunity.”

The research involves a multidisciplinary collaboration of different teams, including scientists in the Center for Autoimmune Genomics and Etiology and the division of Biomedical Informatics and Genetics.

Combining different biological and computational methods of analysis, the research team was able to profile the accessibility of chromatin to molecular remodeling during the early stages of CD4 T cell activation. They used technologies called ChIP-seq (chromatin immunoprecipitation) and ATAC-Seq (Assay for Transposase Accessible Chromatin) that analyze all the different protein interactions with DNA and chromatin state. This allowed the researchers to identify the specific binding sites on chromatin of DNA-associated proteins.

Combining the experimental and computational analysis revealed AP-1 binding to DNA during the early stages of CD4 T cell activation. The researchers show when AP-1 does bind to certain chromatin locations, it does so in conjunction with its molecular partner, NFAT1 (nuclear factor of activated T cells). The researchers said earlier studies have focused on genetic disruption of individual members AP-1 family proteins, of which there are eighteen. In the current study however, the researchers said they broadly blocked the entire AP-1 family of proteins in human naïve T cells.

When study authors inhibited AP-1, they said it prevented chromatin changes that normally occur in the cell nucleus and the T failed to activate. Now Barski and his colleagues are working to find out if the absence of AP-1 contributes to people acquiring an immune disease when AP-1 is unable to bind with mutated loci. Barski says the scientists want to use new information from their future experiments to look for new, groundbreaking therapies that could change the outcome for patients.