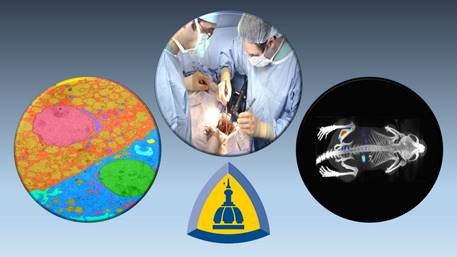 We also want you to continue having access to the latest Johns Hopkins Medicine research achievements and clinical advances, so we are issuing a second tip sheet every Thursday, covering topics not related to COVID-19 or the SARS-CoV-2 virus.

Stories associated with journal publications provide a link to the paper. Interviews with the researchers featured may be arranged by contacting the media representatives listed.

In 2018, researchers at Johns Hopkins Medicine showed that delivering the hunger-suppressing hormone leptin into the nose could ease breathing problems in sleeping obese mice. In addition to its role in metabolism, leptin stimulates breathing and combats obstructive sleep apnea — a condition in which a person’s airway collapses and blocks oxygen intake while sleeping. Apnea is more common in people who are obese.

In a new study published in the July 1, 2020, issue of the American Journal of Respiratory Cell and Molecular Biology, the researchers report that the same nasal delivery method for leptin also can stimulate respiration in obese mice that stop breathing when on morphine.

When on opioids, people with sleep apnea are likely to have more breathing pauses than those who are not medicated. This can lead to overdose and potentially, death. If someone who has sleep apnea is admitted to a hospital for trauma, the patient may be given high doses of opioids to relieve pain. This puts them at increased risk of an overdose and its complications. If this happens and the patient stops breathing, physicians can administer naloxone to negate the opioids and trigger the person to breathe again. However, the opioid’s pain-relieving benefit is removed.

“We believe that if we can confirm our mouse study findings in human trials, applying leptin nasally would be highly useful in hospital trauma settings to keep patients safe while at the same time still treating their pain,” says Vsevolod Polotsky, M.D., Ph.D., professor of medicine at the Johns Hopkins University School of Medicine.

In their experiments, the researchers showed that obese mice on morphine given leptin nasally had more airflow and their airways opened wider than control mice not given the hormone. When a mouse was given enough morphine to stop breathing, a single injection of leptin to the nose restarted the animal’s respiration. Additionally, the mice given leptin retained morphine’s pain-suppressing effects as measured by a flick to the tail.

Scientists at Johns Hopkins Medicine have found types of cells in the brain that are most susceptible to inherited genetic variants linked to schizophrenia. As a result, their work reveals a shortlist of the variants that most likely impact disease risk.

Details of the scientists’ analysis, published April 17, 2020, in Genome Research, compared human genetic studies with data on how DNA is folded in mouse cells, including a diversity of brain cells.

“Every common disease has a major genetic component at its root,” says Andrew McCallion, Ph.D., professor of genetic medicine at the Johns Hopkins University School of Medicine. “Studying genomes across human populations helps us find the genetic landmarks that are linked to disease, but these often don’t give us the biological insight that pinpoints the cells in which that variation acts to impact disease risk.”

For example, says McCallion, the functional region of a gene variant may act differently in the liver than in a brain cell.

For the study, McCallion and doctoral candidate Paul Hook aimed to find the specific cell types in the brain that show the most evidence of being affected by heritable variations in the genome linked with schizophrenia. To find genetic variants among human populations, scientists traditionally use data on the genetic sequence of DNA, or the chemical code that forms our DNA. However, other information about our DNA, such as which genes are turned on or off and how the DNA is folded in different cells reveals patterns that can shed light on what cell types are more likely to be affected by genetic variations in diseases. These variations could make the difference between inheriting risk for a condition such as schizophrenia or not.

One major challenge of human genetic studies is that even when scientists link a region of the genome to disease risk, there may be tens or even hundreds of variants in that location. McCallion and his lab search for ways to systematically use biological data to refine those long lists.

Information on how DNA, packaged with proteins as chromatin, is folded can tell scientists which regions of the genome may be activating genes in different cells at any point in time. Opening the tight constraints of chromatin allows critical proteins access to the DNA-encoded gene switches to start the process of making proteins. Yet, most of the data about chromatin folding in humans has come from cell samples among areas of the body that are easy to access.

For studying neurological disorders, those purified cell samples — embedded deep in the brain — are hard to come by, making it difficult for scientists to make progress on understanding disease origins. McCallion says scientists recently showed that cells from mouse brains often use the same gene “on-off” switches as in humans.

As a proof of principle, McCallion and Hook compared patterns among 25 sets of data on chromatin folding in a diverse range of mouse brain cells with 64 studies of human traits and their associated genetic variation. Their study of chromatin folding patterns in mice revealed a subset of cell types in which more than 170 regions of the human genome have been linked to increased risk for schizophrenia.

Then, the researchers drilled down into the 25 mouse cell datasets to find chromatin folding patterns among six types of brain cells that appear highly important to the origins of schizophrenia.

Looking layer by layer among cells in the cerebral cortex, they found the most similarities between genetic variants and chromatin folding in layers four and five.

McCallion and Hook also identified a short list of 281 variants (reduced from 62,000) that are most likely to increase schizophrenia risk and should be studied further.

The data confirm other genomic studies identifying the cerebral cortex as important for the biologic underpinnings of schizophrenia, McCallion notes, but their work goes further by implicating precise cell layers affected and predicting which variants impact risk.

“Using chromatin data from mice along with studies of human genomic variations can be an important model in identifying cell populations most impacted by genetic variation,” he says.

Eventually, the findings can help scientists map precise locations for disease impact, says McCallion, and develop therapies that are targeted more specifically to cells in those locations.

Recent news headlines, such as “Gender gap in self-promotion penalizes women,” “Women less inclined to self-promote than men” and “Men exaggerate their importance at work while women do the exact opposite,” vividly portray a long-standing problem in the working world: Women often do not evaluate their on-the-job performance accurately. This can create an undeserved gender bias that may result in severe disparities between the sexes in opportunities for leadership roles, career advancement and pay increases.

The medical community is not immune to these disparities. Research suggests that women in medical professions tend to follow the disturbing trend of not assessing their performance properly. Now, investigators at three medical institutions led by Johns Hopkins Medicine have added another group to the list: plastic surgery residents. The researchers showed in a recent study that by the second year of a residency program, self-assessment performance ratings by residents differed significantly from the evaluations by their attending physicians, but not surprisingly, in opposite directions according to gender. Male residents scored themselves much higher than did their advisers, while female residents rated themselves much lower.

“It appears based on our findings that for plastic surgery residents, it takes a year before the gender bias in performance evaluation develops,” says Carisa Cooney, M.P.H., assistant professor of plastic and reconstructive surgery at the Johns Hopkins University School of Medicine and lead author of the study published online on April 23, 2020, in The American Journal of Surgery.

“During the first year of the residency program, we found that both male and female residents significantly underrated their performance,” she explains. “However, the men moved their evaluations upward in post graduate years 2 to 6, while the women continued to significantly underrate themselves over the same period.”

The study team — including researchers from Johns Hopkins Medicine, the University of North Carolina School of Medicine and Baylor Scott & White Medical Center in Texas — examined more than 8,100 evaluations made by 64 residents (25% women) and 51 attending surgeons (29% women) during training programs at the three institutions.

Based on their findings, the researchers recommend more studies to determine the reasons for the gender differences in self-assessments and to provide guidance for developing measures to reduce or eliminate bias.

Consider yourself a “foodie?” Dig into these latest headlines from the Food Science channel