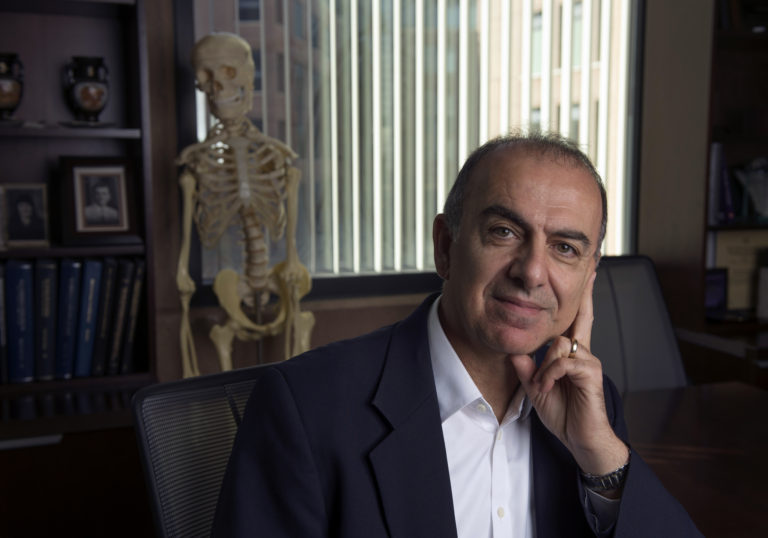 Irvine, Calif., Oct. 22, 2020 — University of California, Irvine biomedical engineer Kyriacos A. Athanasiou has been elected to the National Academy of Medicine, one of the highest distinctions awarded to professionals in the medical sciences, healthcare and public health. He is one of 90 new U.S.-based members announced this week, along with 10 new international members.

Athanasiou was inducted “for inventing, developing, and translating technologies, such as articular cartilage implants and methods for intraosseous infusion, that impact several biomedical fields, including orthopedics, maxillofacial surgery, tissue engineering, diabetes, and emergency care,” according to the NAM citation.

“I am honored to have been elected a member of the National Academy of Medicine,” said Athanasiou, Distinguished Professor of biomedical engineering and Henry Samueli Chair in Engineering at UCI. “The recognition, which would not have been possible without the contributions of my students and colleagues at UCI and other institutions throughout my career, highlights the importance of developing a fundamental understanding of the key engineering principles that govern the human body, inventing new ways to treat acquired and congenital defects, and translating those innovations to help improve the human condition.”

Athanasiou specializes in developing advanced engineered tissues and coming up with other technologies to address a wide variety of medical issues. He is well-known for making implants that help cartilage heal and repair itself. His scaffolds provided the first cartilage implant to treat joint defects and have also been used as bone and dental fillers. Athanasiou’s approach has been to create cartilage constructs to fill in cracks and defects in joints, allowing for the return of smooth, pain-free movement.

He and his team pioneered a revolutionary intraosseous infusion device to deliver drugs and other vital substances directly through bones, going beyond the traditional vein-targeting method. The technology is now commonly implemented by emergency response and ambulance teams around the world and has been featured on such popular television shows as “ER,” “Grey’s Anatomy” and “Inside Combat Rescue.”

Joints and bones in the extremities, the spine and the head have been a significant focus of Athanasiou’s efforts. Specifically, he and his team demonstrated the fabrication of cartilage with properties on par with native tissue in a study published in the prestigious journal Nature Materials.

They also identified pivotal factors in the development of musculoskeletal tissues (published in Proceedings of the National Academy of Sciences) and provided the first robust evidence of healing temporomandibular joint disorder defects in large animal models (published in Science Translational Medicine) using their scaffold-free self-assembling process (described in Science). Athanasiou has published more than 350 peer-reviewed papers, which have been cited 32,000 times.

Athanasiou’s functional, tissue-engineered cartilage replacements can be put to use all over the body – from nose to spine, ears, knees, hips and shoulders. “We want to use tissue engineering to come up with solutions that eliminate pain and restore function,” he said.

Athanasiou has had 15 products approved by the Food and Drug Administration, and he has founded or co-founded five companies, including OsteoBiologics, which makes biodegradable implants and bone-filler formulations; and VidaCare Corp., provider of intraosseous infusion drug delivery systems. Recently, he formed Cartilage Inc., a startup based on intellectual property developed at UCI.

About the University of California, Irvine: Founded in 1965, UCI is the youngest member of the prestigious Association of American Universities. The campus has produced three Nobel laureates and is known for its academic achievement, premier research, innovation and anteater mascot. Led by Chancellor Howard Gillman, UCI has more than 36,000 students and offers 222 degree programs. It’s located in one of the world’s safest and most economically vibrant communities and is Orange County’s second-largest employer, contributing $5 billion annually to the local economy. For more on UCI, visit www.uci.edu.