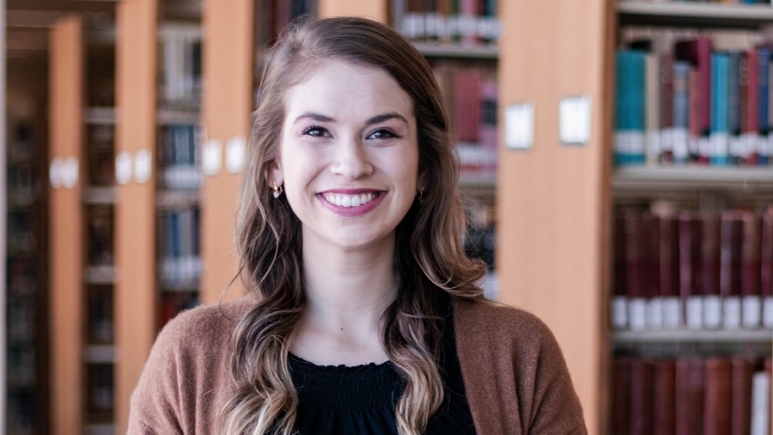 Augustana University undergraduate Audrey Cope ‘21 is one of just 62 college students nationwide to receive the prestigious 2020 Truman Scholar Award, the Harry S. Truman Scholarship Foundation announced Wednesday evening. Cope is the tenth Augustana student to win the award in the university’s history and is the first to be honored since 2005.

Truman Scholars are selected for stellar academic and leadership performance and receive a $30,000 scholarship toward graduate school. Awardees also get the chance to participate in professional development programming to help prepare them for careers in public service leadership.

Cope, a junior majoring in government, international affairs, and French, with a minor in political philosophy, was selected from a national pool of nearly 773 candidates from 316 colleges and universities. The Rapid City, South Dakota, native is the vice president of the Augustana Student Association (ASA) and has a depth of political experience with South Dakota leaders interning in the Washington, D.C., office of Senate Majority Whip John Thune and was selected for the campaign leadership team of U.S. Rep. Dusty Johnson. From these experiences, Cope has learned that South Dakota’s needs require active bipartisanship and honesty, especially when ensuring equitable access to higher education.

“I am truly honored to be selected as a Truman Scholar,” said Cope. “I believe public service creates a network of people who rely on each other to create action-oriented solutions. To me, public service requires you to adopt a genuine “others first” approach, be a lifelong learner, and recognize that a community thrives when all members are being cared for and afforded the opportunity to actualize their best selves.”

After completing her bachelor’s degree at Augustana, Cope plans to pursue policy work in nonprofits or nongovernmental organizations with a focus in removing barriers of access for systemically non-dominant students and universities to actualize equitable access to higher education. She also plans to pursue a joint master’s degree in higher education and public policy.

Cope added that she is proud to represent Augustana in such a prominent national forum, and is truly humbled by and grateful to all of the faculty members, advisors, peers, and countless individuals who helped her achieve this extraordinary scholarship.

“Audrey exemplifies the best of Augustana and the best of South Dakota – she is a stellar student who stands out for her passion for improving her community,” said David Golemboski, assistant professor of government and international affairs and Augustana Truman Scholar faculty representative. “In her time at Augustana, she has emerged as a natural leader on a range of issues confronting our campus, particularly concerning equity and access.”

Cope has a strong academic record — a 3.91 GPA — and has remained active in community service, leadership programs, campus programming and student government throughout her time at the university.

“Audrey’s leadership style is centered on investing in relationships by building common ground, mutual respect and trust,” adds Golemboski. “She has made an impact at the university and has the skills, insight and determination to make even greater change in her professional career. Audrey has a bright future ahead of her, and I have no doubt she will make Augustana and those who she has worked with proud.”

Candidates for the Truman Scholarship go through a rigorous, multi-stage selection process. The 190 finalists for the award were interviewed in March and early April by one of sixteen regional selection panels. A listing of the 62 Scholars can be found on the Truman Foundation’s website.

About the Harry S. Truman Scholarship

The Harry S. Truman Scholarship Foundation was created by Congress in 1975 to be the nation’s living memorial to President Harry S. Truman. The Foundation has a mission to select and support the next generation of public service leaders. The Truman award has become one of the most prestigious national scholarships in the United States.

Founded in 1860, Augustana University in Sioux Falls, South Dakota, is a selective, comprehensive university affiliated with the Evangelical Lutheran Church in America. With more than 100 majors, minors and pre-professional programs for undergraduates — along with graduate degree and continuing education programs — Augustana is committed to enriching lives and fostering development by combining a foundation in the liberal arts with professional skill and advanced study.

Nationally recognized for academic excellence, graduate outcomes and affordability by U.S. News & World Report, Forbes and the Princeton Review, Augustana serves more than 2,100 students from 42 states and 35 countries. Most are part of our residential community and call our 100-acre campus home. Our graduate and continuing education programs serve students online and during times that are convenient for adult learners.

For more information about Augustana University, visit augie.edu or call 605.274.4922.