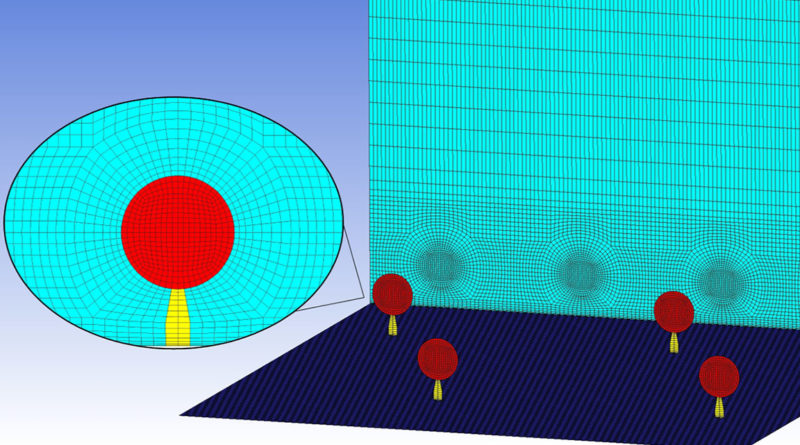 WASHINGTON, D.C., December 12, 2019 — Offshore wind power generation has become an increasingly promising source of renewable energy. Much about the aerodynamic effects of larger wind farms, however, remains poorly understood. New work in this week’s Journal of Renewable and Sustainably Energy, from AIP Publishing, looks to provide more insight in how the structures necessary for wind farms affect air flow.

Scientists from Cranfield University and the University of Oxford present a theoretical model for estimating the aerodynamic effects of wind turbine towers on the performance of wind farms. Using what is called a two-scale coupled momentum balance method, the group was able to theoretically and computationally reconstruct conditions that large wind farms might face in the future, including the dampening effect that comes with spacing turbines close to one another.

A key feature of the paper, said author Lun Ma, is that this most recent update to their model looks beyond a wind turbine’s rotor.

Precisely predicting such features of a wind farm before constructing it, however, remains a major challenge for the industry.

To get at this question, the researchers turned to two-scale momentum modeling that simulates how the efficiencies of individual wind turbines decrease as more are spaced closely together within a wind farm when considered in an ideal, infinitely large wind farm.

The group combined the momentum balance equation with another approach, called actuator disc theory, which let them include other factors, such as the impact of turbine support structures. The approach allowed them to begin considering more practical scenarios, like wind farms that are a finite size.

They then conducted simulations using computational fluid dynamics to verify that such structures contribute to the blockage effect, particularly through the drag on the wind that they produce.

Ma said the group will look to better understand how the blockage effect changes with weather conditions.

The article, “Prediction of the impact of support structures on the aerodynamic performance of large wind farms,” is authored by Lun Ma, Takafumi Nishino and Antonios F. Antoniadis. The article appeared in the Journal of Renewable and Sustainable Energy on Dec. 10, 2019 (DOI: 10.1063/1.5120602) and can be accessed at https://aip.scitation.org/doi/10.1063/1.5120602.

Journal of Renewable and Sustainable Energy is an interdisciplinary journal that publishes across all areas of renewable and sustainable energy relevant to the physical science and engineering communities. Topics covered include solar, wind, biofuels and more, as well as renewable energy integration, energy meteorology and climatology, and renewable resourcing and forecasting. See https://aip.scitation.org/journal/rse.