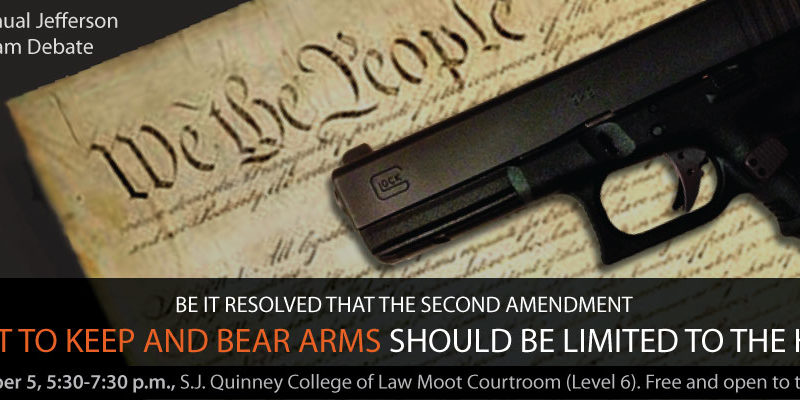 Should the constitutional right to keep and bear arms be limited to the home?

At a time in U.S. history when mass shootings have reached unprecedented levels, debate around how and when to limit guns under the Second Amendment has also reached new heights. American tragedies such as the massacre at Columbine High School in 1999, the unfathomable killing of 6-and 7-year-olds at Sandy Hook Elementary School in 2012 and the horrific murder of 58 concertgoers at the Route 91 Harvest music festival in Las Vegas in 2017 have become commonplace on the evening news.  While some people question whether the nation as a whole has become desensitized to mass shootings due to the frequency of the violence, others have become catalyzed to plead for policy change and tighter gun control that may help to end the carnage.

On the weekend of Aug. 3-4, 2019, two mass shootings took place in the U.S. in less than 24 hours. A gunman killed 22 people and injured dozens more when opening fire at a Walmart filled with back-to-school shoppers in El Paso, Texas. The next day in Dayton, Ohio, nine people were murdered and at least 16 injured in a shooting at a popular entertainment district. The weekend shootings came just days after three people were killed and more than a dozen injured in another mass shooting at a garlic festival in Gilroy, California.

In a pair of deeply divided opinions a decade ago, the U.S. Supreme Court made clear that the Second Amendment provides an individual constitutional right to possess a firearm at home for self-defense. But those cases also approved of some long-standing prohibitions on gun possession, and they did not precisely define either the scope of the Second Amendment right or the boundaries of permissible firearm regulation. Judges, lawmakers and scholars across the country continue to debate these questions, with some suggesting that the jurisprudential, historical and real-world arguments favor an exclusively home-based right and others arguing that the scope cannot be so limited, either as a constitutional or as a practical matter. Which view is right? What consequences follow from each? And does the Supreme Court’s decision to hear a new Second Amendment case suggest that the high court will offer additional insights on the question?

Law professors Darrell A. H. Miller and George Mocsary will debate those challenging questions at this year’s Fordham Debate. Miller is the Melvin G. Shimm Professor of Law at Duke University School of Law and faculty co-director of the Duke Center for Firearms Law.

Mocsary joined the University of Wyoming College of Law in July 2019. Prior to his appointment at Wyoming, he served as an assistant professor at the Southern Illinois University School of Law. Mocsary is a co-author of “Firearms Law and the Second Amendment: Regulation, Rights, and Policy,” the first casebook on its topic.

The debate will be moderated by S.J. Quinney College of Law professor RonNell Andersen Jones, a nationally recognized expert on constitutional law. Given the controversy around Second Amendment issues in an era of mass shootings, Andersen Jones earlier this year launched a new course at the College of Law dedicated to an in-depth study of gun rights.

Her seminar course, Debating Gun Laws & Policy, investigates the history of gun rights and gun regulation in the U.S. through an examination of the landmark Second Amendment case of District of Columbia v. Heller. Students in the inaugural seminar explored the historical, constitutional and practical arguments of both gun-rights proponents and gun-control advocates. They studied policy proposals and propaganda from both sides and considered the ways that culture, ideology, race, geography and socioeconomic factors influence the debate. In weekly “hot-topic conversations,” students led and participated in discussions on the most current issues in gun law and policy. Students completed a substantial writing project that made a unique contribution to the modern debate over firearms regulation. The course will be offered again in the future at the College of Law.

The Fordham Debate is named in honor of professor Jefferson B. Fordham, an outstanding legal scholar and defender of individual and civil rights who joined the U’s College of Law faculty in 1972. The annual debate addresses relevant contemporary public policy and legal issues.