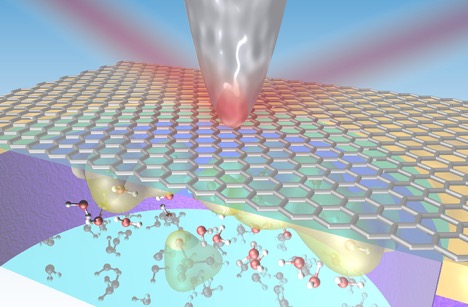 Microbiomes play essential roles in the natural processes that keep the planet and our bodies healthy, so it’s not surprising that scientists’ investigations into these diverse microbial communities are leading to advances in medicine, sustainable agriculture, cheap water purification methods, and environmental cleanup technology, just to name a few. However, trying to determine which microbes contribute to an important geochemical or physiological reaction is both incredibly challenging and slow-going, because the task involves analyzing enormous datasets of genetic and metabolic information to match the compounds mediating a process to the microbes that produced them.

But now, researchers have devised a new way to sort through the information overload.

Writing in Nature Methods, a team led by UC San Diego describes a neural network-based approach called microbe-metabolite vectors (mmvec), which uses probabilities to identify the most likely relationship of co-occurring microbes and metabolites. The team demonstrates how mmvec can outperform traditional correlation-based approaches by applying mmvec to datasets from two well-studied microbiomes types – those found in desert soils and cystic fibrosis patients’ lungs – and gives a taste of how the approach could be used in the future by revealing relationships between microbially-produced metabolites and inflammatory bowel disease.

“Previous statistical tools used to estimate microbe-metabolite correlations performed comparably to random chance,” said Marc Van Goethem, a postdoctoral researcher who is one of three study authors from Berkeley Lab. “Their poor performance led to the detection of spurious relationships and missed many true relationships. Mmvec is a powerful new tool that accurately links metabolite and microbial abundances to solve this problem. There could be wide-ranging applications from clinical trials to environmental engineering. Ultimately, mmvec will allow us to begin moving away from simple pattern recognition towards unravelling mechanisms.”

How a liquid interacts with the surface of a solid is important in batteries and fuel cells, chemical production, corrosion phenomena, and many biological processes.

To better understand this solid-liquid interface, researchers at Berkeley Lab developed a platform to explore these interactions under real conditions (“in situ”) at the nanoscale using a technique that combines infrared light with an atomic force microscopy (AFM) probe. The results were published in the journal Nano Letters.

The team explored the interaction of graphene with several liquids, including water and a common battery electrolyte fluid. Graphene is an atomically thin form of carbon. Its single-layer atomic structure gives the material some unique properties, including incredible mechanical strength and high electrical conductivity.

Researchers used a beam of infrared light produced at Berkeley Lab’s Advanced Light Source and they focused it at the tip of an AFM probe that scanned across a section of graphene in contact with the liquids. The infrared technique provides a nondestructive way to explore the active nanoscale chemistry of the solid-liquid interface.

By measuring the infrared light scattered from the probe’s tip, researchers collected details about the chemical compounds and the concentration of charged particles along the solid-liquid interface. The same technique, which revealed hidden features at this interface that were not seen using conventional methods, can be used to explore a range of materials and liquids.

Adapted from a news release by UC Berkeley:

Fiber-optic cables that constitute a global undersea telecommunications network could one day help scientists study offshore earthquakes and the geologic structures hidden deep beneath the ocean surface. In a recent paper in the journal Science, researchers from UC Berkeley, Lawrence Berkeley National Laboratory (Berkeley Lab), Monterey Bay Aquarium Research Institute (MBARI), and Rice University describe an experiment that turned 20 kilometers of undersea fiber-optic cable into the equivalent of 10,000 seismic stations along the ocean floor. During their four-day experiment in Monterey Bay, they recorded a 3.5 magnitude quake and seismic scattering from underwater fault zones. Their technique, which they had previously tested with fiber-optic cables on land, could provide much-needed data on quakes that occur under the sea, where few seismic stations exist, leaving 70% of Earth’s surface without earthquake detectors.

“This is really a study on the frontier of seismology, the first time anyone has used offshore fiber-optic cables for looking at these types of oceanographic signals or for imaging fault structures,” said Jonathan Ajo-Franklin, a geophysics professor at Rice University in Houston and a faculty scientist at Berkeley Lab. “One of the blank spots in the seismographic network worldwide is in the oceans.”