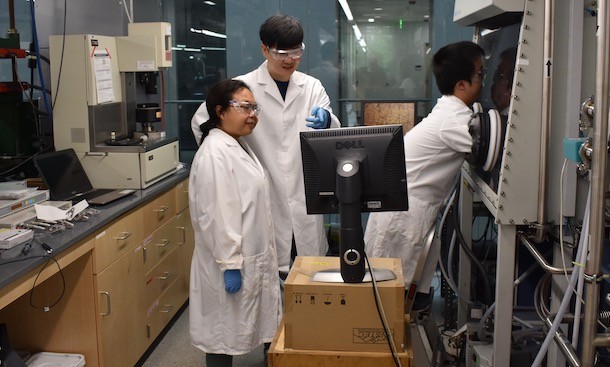 The proposed computationally guided approach will create an accelerated materials design framework that researchers in industry and academia can use to design better experiments for the development of conjugated polymers. Conjugated polymers are plastics like silicon or copper that conduct electricity and are important for the creation of flexible electronics such as bendable displays and medical implants.

“We propose using the computer simulations to predict expected results from experiments in order to create better materials,” said Enrique Gomez, professor of chemical engineering and principal investigator for the study. “This will accelerate the development of polymers for all flexible electronic devices, such as industrially relevant organic LEDs for improved digital displays, transistors, photovoltaics and new bioelectronics for medical applications.”

Charges in a conductive material move along molecular chains, microstructures known as “backbones.” This charge transport tends to be slower in conjugated polymers than in silicon, which is a problem for production of electronics, which require faster charge mobilities.

The proposed process will integrate theory, experiments and the computer simulations to develop new tools and refine concepts of how these microstructures govern charge transport in conjugated polymers. This will build on previous research conducted by Gomez, which took on the challenge of developing a flexible conjugated polymer that consistently exhibits high charge mobilities.

The researchers demonstrated that a potential solution involves nematic order, which is when all the backbones align themselves all in the same direction, much like the strands in a box of uncooked spaghetti. The researchers previously demonstrated that the nematic order of the backbones in conjugated polymers leads to faster charge mobilities compared to when the chains are pointing in random directions.

Nematic order is a type of liquid crystallinity, which is a state of matter between a solid and a liquid. In polymers, it corresponds to having the backbone chains roughly aligned with each other at a molecular scale. Often, the polymer chains arrange themselves in a tightly packed manner favorable for conductivity in a process known as self-organization.

“We believe that liquid crystallinity is important for charge conduction in polymers, and although we have published some evidence for this, we aim to identify the key concepts behind this hypothesis with simulations,” Gomez said.

Developing the simulations will enable the researchers to speed up their work, according to Gomez.

“We developed the approaches to predict the shape of chains used in flexible electronics, as well as their propensity for liquid crystallinity and self-organization,” he said. “We now will work to develop methodologies to reduce the time required to run these experiments, to increase the throughput of computer simulations and to make better predictions of properties that are key for electronic materials.”

Gomez added that practical applications of their proposed computationally guided approach could extend beyond flexible electronics.

“Besides electronics, using computer simulations to develop a theoretical description of self-assembly for semiflexible polymers will be transformative across many applications,” Gomez said. “This would include such areas as the development of biopolymers, the engineering of thermoplastics and liquid crystal research.”