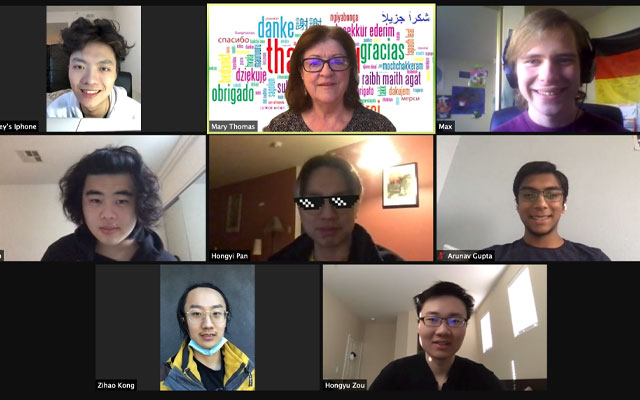 A team fielded for the first time by the San Diego Supercomputer Center (SDSC) at UC San Diego competed in this year’s Student Cluster Competition at the annual International Conference for High-Performance Computing, Networking, Storage, and Analysis (SC20) achieved fourth place overall among 19 teams during the 72-hour challenge, which was held in a virtual format for the first time due to the coronavirus pandemic.

In addition to placing in the top quartile overall, the Superscalars achieved the highest score on the mystery application, ranked third in HPCG with 4.056 teraflops (a processor’s capability to calculate one trillion floating-point operations per second), fifth for the reproducibility application, and sixth for the IO-500 with 16 gigabytes per second (GB/s). They also submitted full or partial results for every one of the applications in the competition.

“Our team did extremely well, considering that they were the first team sponsored by SDSC,” said Mary Thomas, a computational data scientist with SDSC and lead for the Center’s High-Performance Computing (HPC) training program. “Not ones to rest on their laurels, they’re already organizing to submit to the SCC21 competition!”

The Student Cluster Competition was developed in 2007 to provide an immersive high-performance computing experience to undergraduate and high school students. For SC20, the competition was moved to the cloud to accommodate remote participation, becoming the Virtual Student Cluster Competition (VSCC). With sponsorship from vendor partners, student teams design and build virtual clusters in the Microsoft Azure cloud, learn scientific applications, apply optimization techniques for their chosen cloud configurations, and compete with teams around the world to complete a set of benchmarks and real-world scientific workloads.

The San Diego Supercomputer Center (SDSC) is a leader and pioneer in high-performance and data-intensive computing, providing cyberinfrastructure resources, services, and expertise to the national research community, academia, and industry. Located on the UC San Diego campus, SDSC supports hundreds of multidisciplinary programs spanning a wide variety of domains, from astrophysics and earth sciences to disease research and drug discovery. In late 2020 SDSC will launch its newest National Science Foundation-funded supercomputer, Expanse. At over twice the performance of Comet, Expanse supports SDSC’s theme of ‘Computing without Boundaries’ with a data-centric architecture, public cloud integration, and state-of-the art GPUs for incorporating experimental facilities and edge computing.