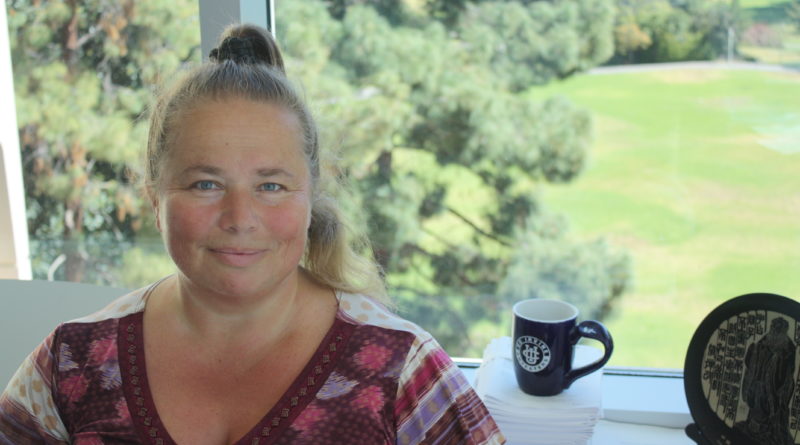 WASHINGTON, D.C., October 22, 2019 — The American Institute of Physics and the American Physical Society announce Svetlana Jitomirskaya, from the University of California, Irvine, as the recipient of the 2020 Dannie Heineman Prize for Mathematical Physics. The award is given annually to recognize significant contributions to the field. Jitomirskaya is the second woman to receive this award.

“I am tremendously grateful for this recognition,” said Jitomirskaya, who cites her influences as mathematician Jean Bourgain and Barry Simon, a 2018 Heineman Prize recipient.

“We are excited to present this year’s Heineman Prize for Mathematical Physics to Dr. Svetlana Jitomirskaya,” said Michael Moloney, chief executive officer of AIP. “Over the course of her nearly three-decade career, she has made invaluable contributions to her field. We at AIP thank her for her work and congratulate her on this win.”

The citation on the award reads:

“for work on the spectral theory of almost-periodic Schrödinger operators and related questions in dynamical systems. In particular, for her role in the solution of the Ten Martini problem, concerning the Cantor set nature of the spectrum of all almost Mathieu operators and in the development of the fundamental mathematical aspects of the localization and metal-insulator transition phenomena.”

Jitomirskaya, a mathematician, described her foray into mathematical physics as serendipitous.

“At the school of math at Moscow State, we were supposed to choose an advisor and department by the end of the second year of the undergraduate. For me, it meant the ripe old age of 17,” said Jitomirskaya. “Among the professors in my classes, Yakov Sinai and Vladimir Arnold were my favorite, so I was choosing between their departments, probability and differential equations. I, of course, knew they were great mathematicians, but who could have known they were both hidden mathematical physicists?”

Sinai and Arnold both went on to win Heineman Prizes in 1990 and 2001, respectively.

“Could it just be that the physics community and I have similar tastes in math? I went with Sinai, because he noticed me and invited me to attend a learning seminar.”

After earning her doctorate at Moscow State, Jitomirskaya ended up at UCI, where mathematical physicist Abel Klein became her mentor. She said this combination of advisor, subsequent mentor and welcoming mathematical physics community early on placed her solidly into the field.

Jitomirskaya cited her work on quasiperiodic localization as her main accomplishment in her career to date.

“Quasiperiodic localization is a topic that has been traditionally approached via a form of the Kolmogorov-Arnold-Moser theorem and technique, which is used to prove persistence of quasiperiodic motions under small perturbations in infinite-dimensional space, requiring intricate methods designed to deal with small denominators that appear in perturbative expansions,” she said. “I developed a new, simple and more direct approach that has allowed us to obtain a result up to the phase transition point.”

Jitomirskaya said she is currently working on a physics project that doesn’t focus on her mathematical skills for the first time.

“The most exciting of my current projects is related to topological phase transitions, the phenomenon of closure and opening of gaps in certain Hofstadter-type structures. This may have some interesting implications. I even started talking to the experimental physicists!”

ABOUT THE HEINEMAN PRIZE

The Heineman Prize is named after Dannie N. Heineman, an engineer, business executive, and philanthropic sponsor of the sciences. The prize was established in 1979 by the Heineman Foundation for Research, Education, Charitable and Scientific Purposes, Inc. Awarded annually, the prize consists of $10,000 and a certificate citing the contributions made by the recipient plus travel expenses to attend the meeting at which the prize is bestowed.

The American Institute of Physics advances, promotes and serves the physical sciences for the benefit of humanity. AIP offers authoritative information, services, and expertise in physics education and student programs, science communication, government relations, career services for science and engineering professionals, statistical research in physics employment and education, industrial outreach, and the history of physics and allied fields. http://www.aip.org

The American Physical Society (www.aps.org) is a non-profit membership organization working to advance and diffuse the knowledge of physics through its outstanding research journals, scientific meetings, and education, outreach, advocacy and international activities. APS represents over 53,000 members, including physicists in academia, national laboratories and industry in the United States and throughout the world. Society offices are located in College Park, MD (Headquarters), Ridge, NY, and Washington, DC.