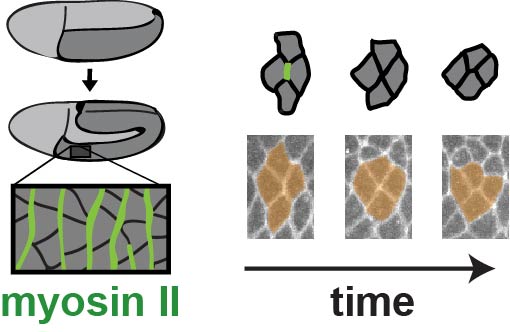 New York, NY—October 28, 2019—Myosins are motor proteins that convert chemical energy into mechanical work, generating force and movement. Myosin II generates forces that are essential to drive cell movements and cell shape changes that generate tissue structure. While researchers know that mutations in the genes that encode nonmuscle myosin II lead to diseases, including severe congenital defects as well as blood platelet dysfunction, nephritis, and deafness in adults, they do not fully understand the mechanisms that translate altered myosin activity into specific changes in tissue organization and physiology.

“It’s not currently possible to watch what happens at the cell level when these genes are mutated in humans, and it’s still really difficult to do this in mammalian model organisms like mice,” says Kasza, the study’s lead author who began the research as a postdoctoral fellow at the Sloan Kettering Institute and continued it when she joined Columbia Engineering in 2016.

Because there are so many similarities between the myosin II protein in humans and in fruit flies, Kasza’s approach was to start by tackling how to “watch” the effects of myosin II mutations in fruit flies. Her group engineered the human disease mutations into fruit fly myosin and then observed how this affected the behaviors of the proteins, cells, and tissues in the organism.

They used high-resolution confocal fluorescence imaging to take movies of the process, together with biophysical approaches such as laser ablation, or laser nano-dissection, to measure the forces generated by the mutated myosin II motor proteins in vivo.

Kasza found that, while the mutated myosin II motor proteins actually went to the proper places inside cells and were able to generate force, the fine-scale organization of the myosin proteins and the speed of their movement inside cells were different than for the normal wild-type myosin protein. The team saw slower movements of cells within tissues that brought about abnormalities in embryo shape during development.

“By ‘watching’ how cells move and generate forces inside living tissues, we’ve uncovered new clues as to why mutations in the MYH9 gene cause a broad spectrum of disorders in humans.” Kasza observes. “Our work sheds new light on how motor proteins generate forces inside living tissues and on how genetic factors alter these forces to result in disease. This mechanistic understanding will help us better understand these diseases and could lead to new diagnostic or therapeutic strategies down the road.”

The researchers are now working on new approaches to very precisely manipulate the forces generated by myosin motors inside living cells and tissues. These new tools will help the team to uncover how mechanical forces influence biochemical processes that control cell movements and cell fate. These studies will be essential to better understanding how dysregulation of mechanical forces contributes to disease.

The study was supported by NIH/NIGMS R01 grant GM102803 to JAZ. KEK holds a Career Award at the Scientific Interface from the Burroughs Wellcome Fund, a Clare Boothe Luce Professorship, and a Packard Fellowship. JAZ is an investigator of the Howard Hughes Medical Institute.

The authors declare no financial or other conflicts of interest.