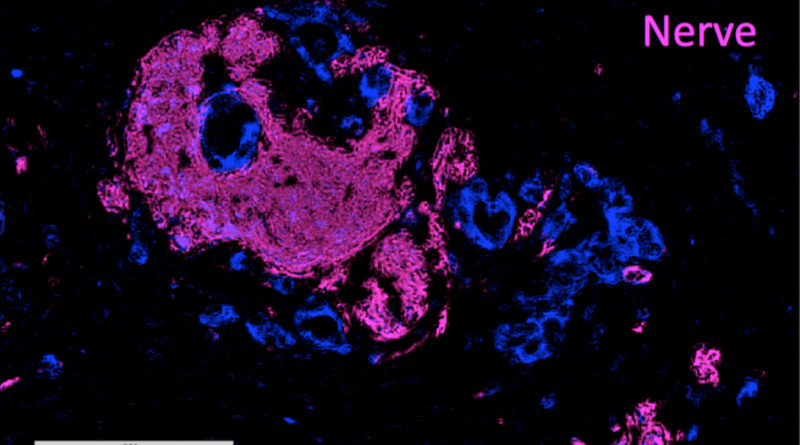 A couple of molecules that nerve cells use to grow during development could help explain why the most common pancreatic cancers are so difficult to contain and for patients to survive, a new study led by Johns Hopkins Kimmel Cancer Center researchers suggests.

The findings, based on experiments in human and mouse cells and published in the May issue of Gastroenterology, could lead to new ways to prevent the spread, or metastasis, of these cancers as well as to treat the extreme pain that often accompanies them.

Pancreatic ductal adenocarcinoma (PDA) affects an estimated 57,000 Americans annually and kills about 45,000, according to the American Cancer Society, making it the fourth leading cause of cancer death in the U.S. Its five-year, stage-combined survival rate of 9% is lower than that of any other cancer type in the nation, explains study leader Lei Zheng, M.D., Ph.D., associate professor of oncology and co-director of the Johns Hopkins Precision Medicine Center of Excellence for Pancreatic Cancer. The main reason for the cancer’s poor prognosis is metastasis, the process by which cancers grow and spread to distant organs. Many patients already have metastatic disease at diagnosis; those who don’t still typically die of metastatic disease even after local disease has been ostensibly controlled by surgery and radiation.

Most cases of PDA are also marked by a process called perineural invasion (PNI), in which tumors grow into nearby nerves. Although it’s been well established that PNI is an accurate sign of poor prognosis and decreased survival, why it occurs and whether it’s connected with metastasis has been unclear.

To investigate these questions, Zheng and his colleagues used human and mouse cell lines to look closely at axon guidance proteins, a family of biochemical molecules frequently found to be genetically altered in PDA. They focused further on two of these proteins: SEMA3D and its target, PLXND1. Both are involved in growing the long extensions of nerve cells, called axons. Zheng’s own laboratory research has shown that PDA cells often produce SEMA3D in abundance.

Experiments with human pancreatic cancer cells grown in their laboratory showed that when the researchers used genetic tweaks to knock down the amount of SEMA3D that cancer cells produced, those cells lost approximately 30% of their capacity to invade nearby nerves compared with cancer cells that produced the normal amount of these protein molecules.

When the researchers injected the altered human pancreatic cancer cells into mice, they found a fourfold increase in nerves that grew into the tumors.

Zheng and his colleagues made similar findings when they blocked PLXND1, the receptor for SEMA3D, on nerve cells in laboratory models of human pancreatic cancer cells. The cancer cells simply weren’t as attracted to the nerves, says Noelle Jurcak, the first author. In addition, when the researchers genetically altered mice to reduce the amount of PLXND1 that their nerves produced, they made what they said was a stunning finding: Not only did fewer nerves grow around tumor cells, but also the animals displayed a sharp decline in metastasis, suggesting that PNI is critical for metastatic PDA growth.

The researchers confirmed the critical role of these molecules in human PDA cells. In pancreatic cancer tissue samples taken from patients, the researchers found that tumors and nearby nerves that expressed low amounts of SEMA3D and PLXND1 were 10 times more likely to be situated farther apart, and that those with high amounts of these proteins were associated with high levels of PNI.

As a whole, Zheng notes, the findings suggest that SEMA3D and PLXND1 play crucial roles in PNI and PDA metastasis. Eventually, the researchers say, they may be able to develop medications that target these two molecules so as to stem cancer-related pain by keeping PNI in check. Targeting SEMA3D and PLXND1 may also help prevent or slow metastasis, he adds.

Zheng cautions that it’s still unclear precisely how these molecules are involved in cancer spread, but says one possible explanation is that pancreatic cancers conceal themselves in nearby nerves even after the primary tumor is removed. If so, new surgical strategies or medications could help slow the spread of PDA and related cancers, improving their low survival rate.

“Our next step is to see whether we can demonstrate that nerves become a niche to host invaded tumor cells,” Zheng says. “If tumor cells are hiding there, that could become a source of recurrence.”