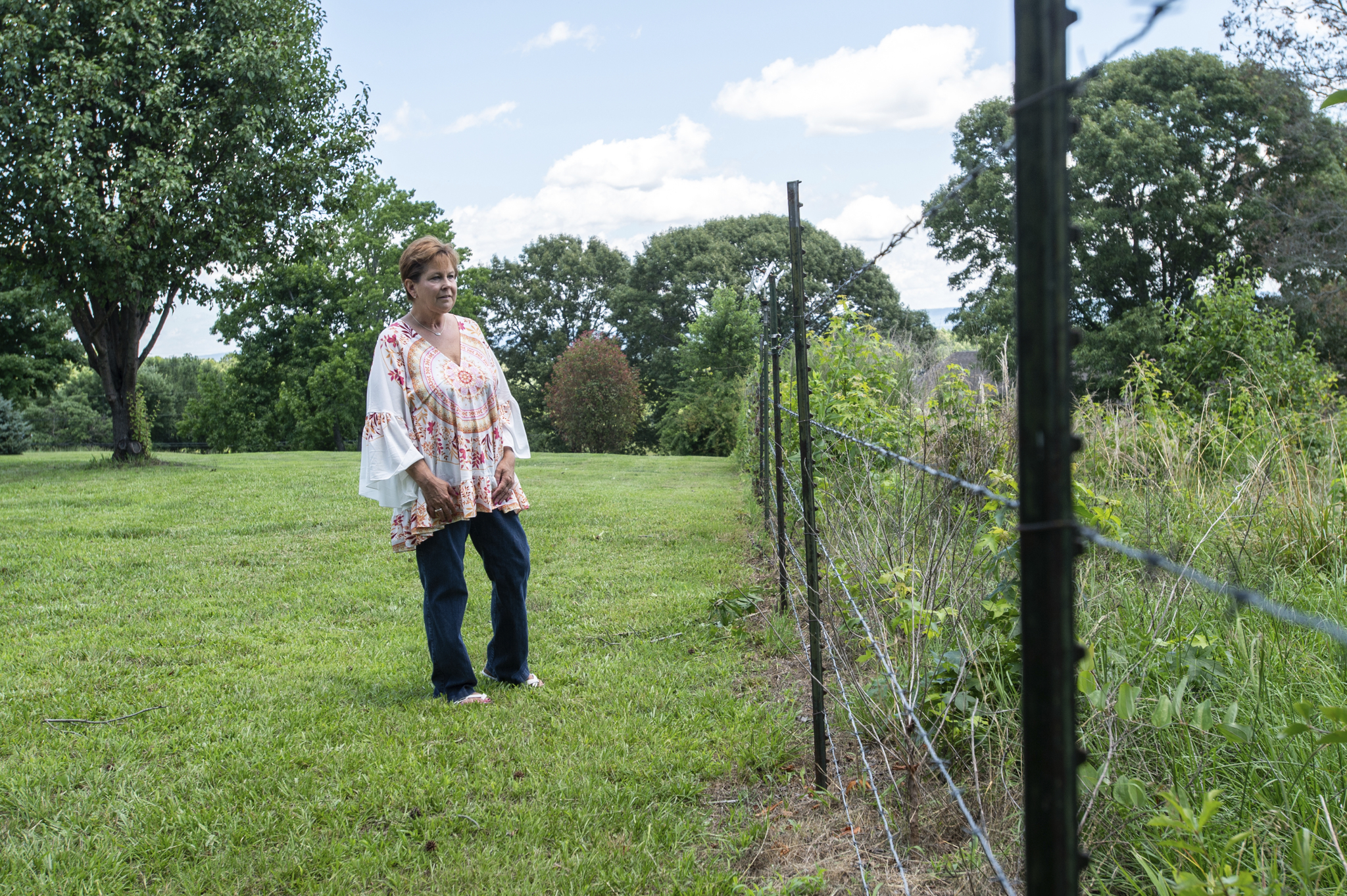 – Christmas Eve, 2018. Diane Eubank is enjoying driving her all-terrain vehicle on the family’s rural Blount County property. Swinging around the pool in back of the house, past the large oaks in the front yard and up the fence line toward the barn.

She has a passenger, German exchange student Jonas, who has been staying with Diane and husband Tommy. Jonas’ mother and sister have just arrived that day for a Christmas visit to the United States. Diane is no stranger to ATVs, and she ’s ridden this route many a time.

But today, something goes terribly wrong.

She hit the fence at speed, and the top strand of wire caught her on the throat. It flayed the skin back, and severed the ligaments that hold the head up. In lay terms, it is called an internal decapitation. The only thing attaching her head to her neck was her brain stem.

“Some of the strongest ligaments in the body hold the head to the neck,” said Steven Theiss, M.D., chair of the Department of Orthopaedic Surgery at the University of Alabama at Birmingham School of Medicine. “All of the structural supports in her neck were damaged, which usually leads to death.”

Diane also had a broken jaw, and one ear was hanging by a flap of skin. She had lacerations on both arms. What she did not have was a spinal cord injury.

“This was a unique situation in that, with all the damage done to her neck, she did not have a spinal cord injury, although the spinal cord was very unstable,” said Daniel Cox, M.D., the trauma medical director in the Division of Acute Care Surgery, and the trauma surgeon on call that night. “Lack of a spinal cord injury is a big part of why she survived.”

Today, Diane and her UAB physicians point to a number of factors that played big parts in why she survived. A state trooper who was a family friend happened to be nearby. He heard the radio call go out to local first responders and was on the scene in moments. He called for a helicopter to be dispatched before EMTs even arrived, saving valuable time.

“Credit those first responders who were able to get an airway established,” said William Carroll, M.D., chair of the UAB Department of Otolaryngology. “That was key. By the time we saw her at UAB, she would have been dead had they not gotten her airway protected and secured. The initial stabilization on-site saved her life.”

Not that there were not some anxious moments once she arrived in the UAB Trauma Center.

“With the risk of spinal injury, we had to proceed extremely cautiously as we discovered the scope of her injuries,” Cox said. “After the great work done by the flight crew to get her to us with an airway, the trauma team further stabilized her and fully worked up her injuries. We then headed to the operating room, with a call in to our colleagues in ENT and orthopaedics.”

Leading to a marathon, ten10-hour session in the OR, beginning at 6:50 p.m. on Christmas Eve. At 5 a.m. on Christmas morning, the surgical teams were finally done. Theiss and his ortho team worked on the back of the neck, basically reattaching her head to her neck. Carroll’s ENT team handled the front side, repairing the airway and other soft tissue, and reattaching her ear. Cox and the trauma staff attended to the arm injuries.

Neurosurgeon Mark Harrigan, M.D., was called in to check on what fortunately turned out to be minor injuries to the vertebral arteries that bring blood to the brain. Somsak Sittitavornwong, DMD, from the UAB School of Dentistry Department of Oral and Maxillofacial Surgery, wired her jaw shut. It was a total team effort.

“Only a Level 1 Trauma Center could have done this,” Cox said. “No other medical facility would have had the resources available, especially on Christmas Eve. UAB had department chairs in orthopaedics and otolaryngology on duty that night, and senior surgeons in the other disciplines, along with highly trained nurses and all the other personnel required to provide this level of care. Any misstep at any point could have changed the outcome dramatically.”

“This is a clear example of multidisciplinary care coming together to give the patient a good outcome,” Carroll added. “She needed a center capable of handling major trauma, a center that had the staff required to handle each separate part of the process.”

“And she needed a system that extended beyond the hospital, with a coordinated emergency medical system in BREMSS, and invaluable contributions from the first responders and the flight crew of the transport helicopter,” Theiss said. “All these parts had to work seamlessly if she was to have a good outcome.”

Talk to Diane Eubank today and she will say it was a very good outcome.

“They told my family that many patients with these types of injuries die at the scene, but the outstanding work by the first responders gave me a chance,” she said. “Those who make it to the hospital are often left a quadriplegic. They kept asking me to wiggle my toes in the intensive care unit, and now I know why. The day after Christmas, they told me I’d walk again.”

“This is an injury with a high mortality rate, and to have a fully functional recovery is rare,” Cox said. “It required a lot of specially skilled people to get through the key first 24 hours. Re-establishing her airway and getting the spine stabilized allowed her to have her good recovery.”

Eubank will have pain for the rest of her life, and she cannot move her neck much. She has limited movement in one arm. She says she used to be the loudest person in the room, but the damage to her larynx has left her soft-spoken.

“That’s OK. I’m alive,” Eubank said. “The wreck made me a better person. Outside of the pain, I’d almost go through it again. God has his hand in this, and I promised I would tell my story. I said, if I make it through this, I’ll sing it from the rooftops.”

As she recalls the crash now, she says time slowed down when she realized she would hit the fence.

“I wasn’t scared and felt a sense of peace,” she recalled. “I told God to take me and not Jonas.”

It was several days after the crash before she found out what happened to him.

“I woke up in intensive care, and he was looking down at me. I thought he was an angel,” she said.

As it turned out, he was simply a concerned visitor. Jonas had tumbled from the ATV and was unhurt, but he and his family spent hours at the hospital with Diane’s family as they waited on news of her recovery. He has since ridden the ATV, which remains parked in the barn. Diane has sat on it, but cannot bring herself to ride it again.

An internal decapitation sounds — and is — gruesome. But it is not as rare as one might think. UAB physicians say it is not uncommon, often the result of car wrecks or high-speed car-versus-pedestrian encounters.

“I used to see these sorts of injuries up north from snowmobiles hitting a fence,” Carroll said.

Theiss and Cox agree that internal decapitation, known formally as atlanto-occipital dislocation, is more common than most people expect. UAB treats about 10 a year. The injury suffered by race car driver Dale Earnhardt was similar.

“It’s certainly a surgical emergency, since the neck is so unstable,” Theiss said. “The critical part is the care they receive in the field. Those who make it to a major medical center such as UAB have a good chance at a positive outcome.”

There was one other positive for Diane Eubank. Her jaw was wired shut until mid-March, and her feeding tube was not removed until April.

“I lost 39 pounds through all of this,” she said. “I’m certainly happy about that!”