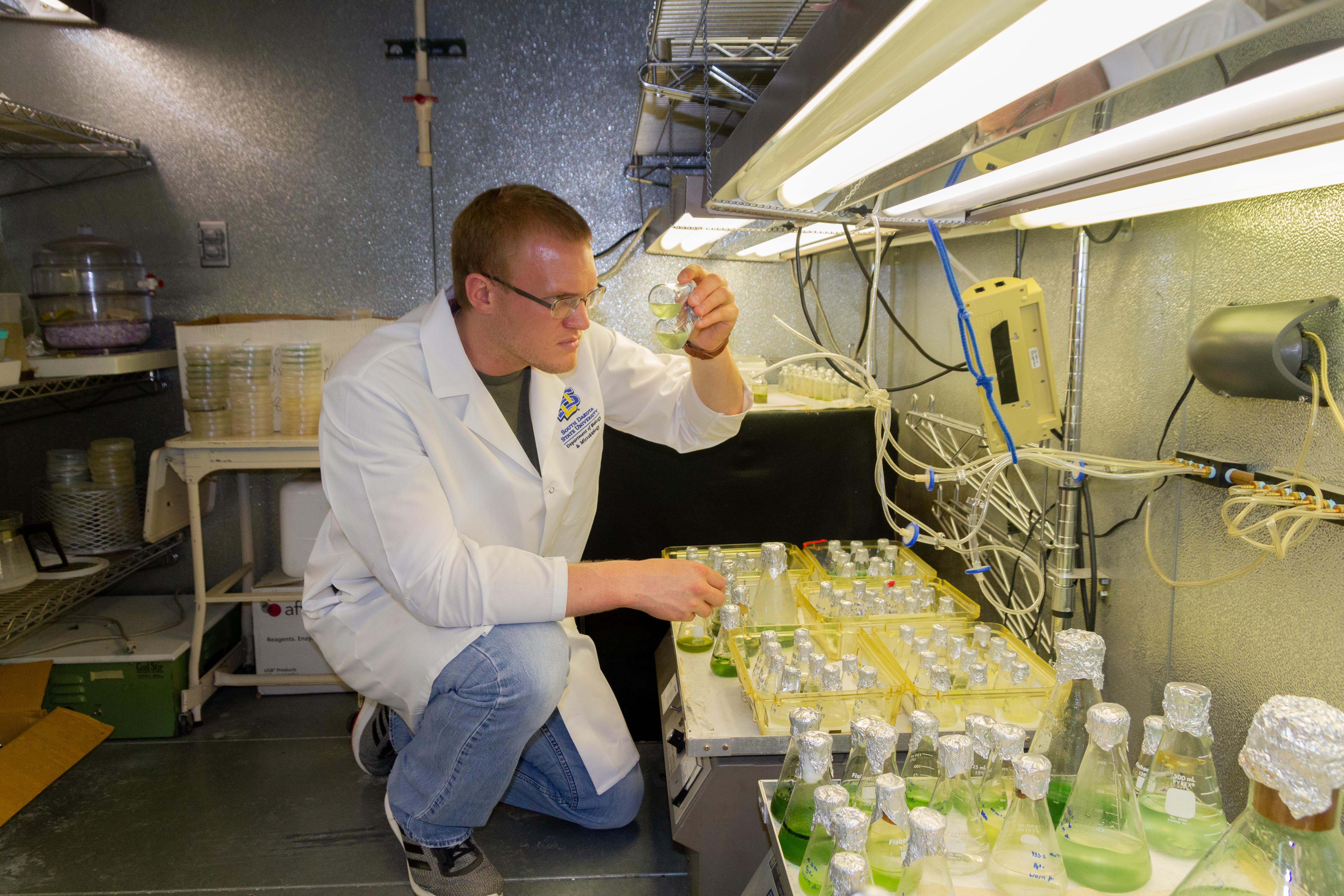 His research in the Department of Biology and Microbiology investigates the genetic mechanisms that give cyanobacteria the ability to edit their own genomes. This editing mechanism produces cells with different genomes that function differently, thus allowing the bacteria to live in conditions it previously could not.

Many cyanobacteria can evolve into two cell types, one that makes its own food through photosynthesis and generates oxygen as a byproduct and the other that fixes nitrogen gas, N2, using solar energy, explained Van Den Top, who works with the Anabaena genus.

“These cyanobacteria live as long chains of identical photosynthetic cells, but when no fixed nitrogen is available, cells known as heterocysts form within these chains of cells,” he said. Heterocyst cells have thick walls that keep out oxygen during the nitrogen-fixing process and also have a smaller genome when compared to photosynthetic cells.

“What we have is a multicellular organism that can exist as two different cell types with slightly different genomes, yet both originate from a single cell,” he said.

For his research poster titled “A Phage-Type Tyrosine Integrase Is Responsible for the Excision of the nifH1 element in Anabaena cylindrica ATCC 29414,” Van Den Top received one of two awards given at the 13th Workshop on Cyanobacteria in Boulder, Colorado. The international event, begun 40 years ago, is held every three years in North America.

Understanding how cyanobacteria edit their genomes could help scientists develop techniques for editing out defective genes that cause disease, Van Den Top explained. Such a technique could be used, for example, to disrupt the DNA of cancer cells by turning off a defective cancer-causing gene and substituting the correct copy of that gene in the person’s genome.

Uncovering how process is regulated

“Three parts of a key nitrogenase gene must be assembled together for the cyanobacterium to fix nitrogen, but that requires precisely editing out two DNA segments that are as long as 90,176 base pairs,” Van Den Top explained.

To illustrate what happens, he compares the cyanobacteria genome to a book. The photosynthetic cells are the longer, more common version of the story. In the nitrogen-fixing cells, he said, “90% of the story is the same, but some pages have been ripped out. Removing just a few pages changes the plot, but it’s still a complete story.”

Van Den Top’s research focuses on figuring out how the removal process is regulated. “My research provides strong evidence that the genomic reduction is the result of the remains of viral agents in the genome that can edit itself out but is controlled by the host,” he explained. Based on the book analogy, he asked, “How do the viral agents know not only how to tear out the pages without damaging the book, but also how to do this correctly time after time without fail?”

“This prestigious award recognizes quality research and Trevor’s passion for and commitment to his project. This is also a great honor for our green microbiology lab at SDSU,” said Van Den Top’s research adviser, professor Ruanbao Zhou of the Department of Biology and Microbiology in the College of Natural Sciences. “Trevor’s further research may lead to the development of a new technology for precision genome editing.”

“This award is a tribute to the high caliber research that Trevor and other researchers in Dr. Zhou’s lab are doing,” said Distinguished Professor William Gibbons, interim director of the South Dakota Agricultural Experiment Station. “Undergraduates and graduate students under Dr. Zhou’s tutelage have the unique opportunity to conduct leading edge research on a class of microbes that exhibit a broad range of characteristics. Their work is leading to important fundamental discoveries, with potential applications in fields as diverse as agriculture and medicine.”