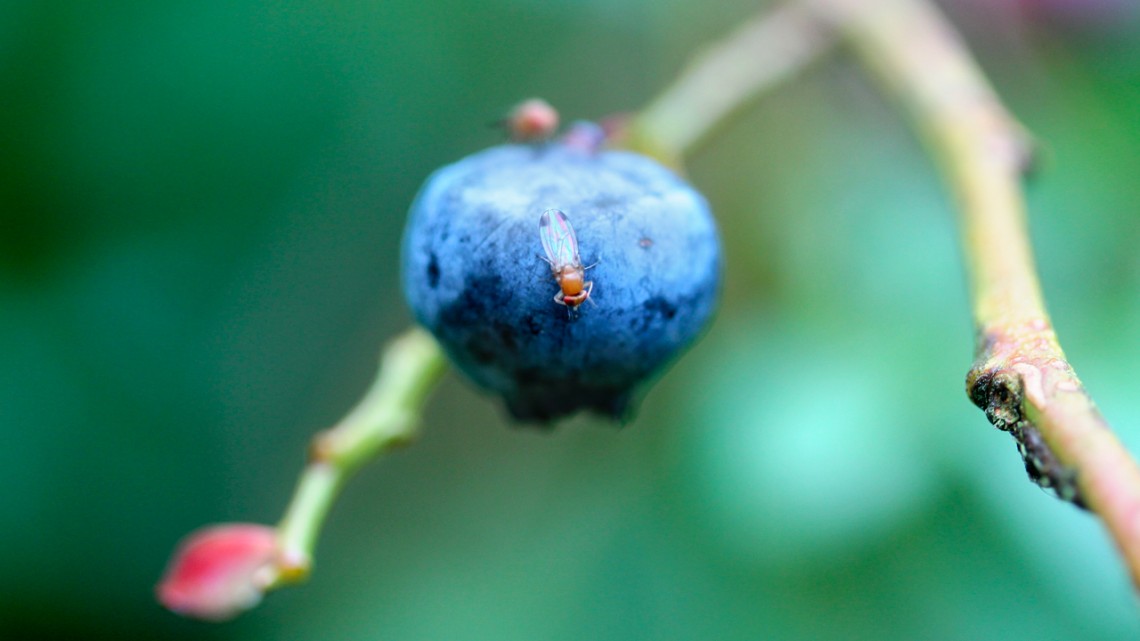 But little has been known about how the pests survive before and after the growing season.

A Cornell University study, published in Ecological Entomology, investigates for the first time what spotted-wing drosophila adults and larvae eat, and where they lay their eggs, when these short-lived fruits are not in season.

Female spotted-wing drosophila (Drosophila suzukii Matsumura) have a special ovipositor (a tube through which a female insect deposits eggs) with a saw-like end that allows them to cut into soft fruits and insert their eggs. The larvae and adults feed on the fruits, causing billions of dollars in damage across Asia, North and South America, and Europe.

“They will lay eggs and successfully develop on less preferred resources and not the typical fruit that we think they prefer,” said Greg Loeb, professor of entomology at Cornell AgriTech and a co-author of the paper. Dara Stockton, a postdoctoral associate in Loeb’s lab, is the paper’s first author.

In lab experiments, the researchers found that out of 11 alternate dietary choices that included bird manure, the spotted-wing drosophila did best on diets of mushroom and mushroom-apple mixtures.

In the early spring, mushrooms are one of the only resources available. Similarly, in late fall, apples that fall to the ground and rot can provide a food source. And the experiments showed that more complex bird manures, such as from geese, proved more sustaining than simple chicken manure, for example.

The results may help curb pest populations by encouraging growers to limit access to certain non-fruit food sources during times when drosophila populations are low and berries are not in season.

“It’s always important for us, when we’re developing integrated pest management control strategies, to think about the landscape surrounding the crop and consider things happening in the periphery that we can control,” Stockton said. For example, controlling geese in a pond next to a crop could help limit fruit fly populations at a time when their numbers are low before berries ripen, she said.

“The more we learn about the flies, the better we can control their populations,” Stockton said.

Other experiments revealed that if an individual was reared on a certain food, such as goose manure, that fly is more likely to accept it later in its life than a fly that had never encountered it.

Another experiment looked at survival over eight weeks when flies were limited to a single diet.

“We found that complex diets, including mushroom and apple, were superior to simpler diets in terms of survival long term,” Stockton said. Along with varying diets, tests included lowering temperatures to simulate spring and fall and understanding nutritional components.

Based on numbers of flies captured in traps, spotted-wing drosophila become detectable in May, with numbers peaking in July and August, and staying consistent into December when temperatures drop below freezing. The flies can live for a full year, with a female laying up to 400 eggs over a month in non-fruit food sources in early spring.

Rachael Brown, a former undergraduate intern in Loeb’s lab from Hobart and William Smith Colleges in Geneva, New York, is a co-author of the study, which was funded by the U.S. Department of Agriculture.