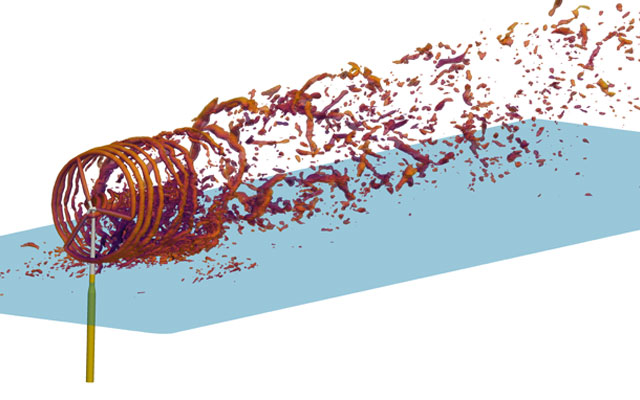 Over the past few years, offshore wind farms have emerged across the world as a viable source of energy.  While these powerful floating wind turbines are typically more than 800 feet tall and weigh over a ton, they reduce land-use concerns, access better offshore wind resources, and can generate more power than land wind turbine farms. However, they present a complex engineering design problem: how can they be optimized to operate in the uniquely challenging offshore environment?

In a Journal of Physics: Conference Series paper published this summer called Large eddy simulations of floating offshore wind turbine wakes with coupled platform motion, researchers from the University of Massachusetts Amherst and the National Renewable Energy Laboratory (NREL) discussed their efforts to advance our knowledge of this issue.

The collaborative study aimed to better understand how the wake effects of large wind farm arrays decrease power output and reduce the lifespan of the turbines. Because of the growing prospect for floating wind farms, the researchers focused on the differences between floating turbine wakes and fixed turbine wakes.

“We looked at how these wake effects can be accurately considered when designing floating offshore wind farms,” said lead author and National Science Foundation (NSF) Graduate Research Fellow Hannah Johlas. “At about 20,000 computer processor hours, these high-fidelity large eddy simulations are very computationally intensive and expensive, and as such, this research can only be performed using supercomputers.”

“With global-installed capacity of offshore wind increasing from 8.9 gigawatts in 2015 to 22.5 gigawatts in 2018, this research is becoming even more prevalent and now that we know more about how wakes behave for floating turbines, we will examine how those floating-turbine wakes affect downstream turbine power generation and structural loading,” said Johlas, who has focused her Ph.D. in mechanical engineering at the University of Massachusetts at Amherst on this project. “Comet and Stampede2’s reliability and computing environment flexibility helped complete this research in a time-efficient manner.”

The research was funded by an NSF Graduate Research Fellowship, grant #1451512. The project used the Extreme Science and Engineering Discovery Environment (XSEDE) program funded by NSF grant #ACI-1548562, as well as NREL computational resources sponsored by the Department of Energy’s Office of Energy Efficiency and Renewable Energy.