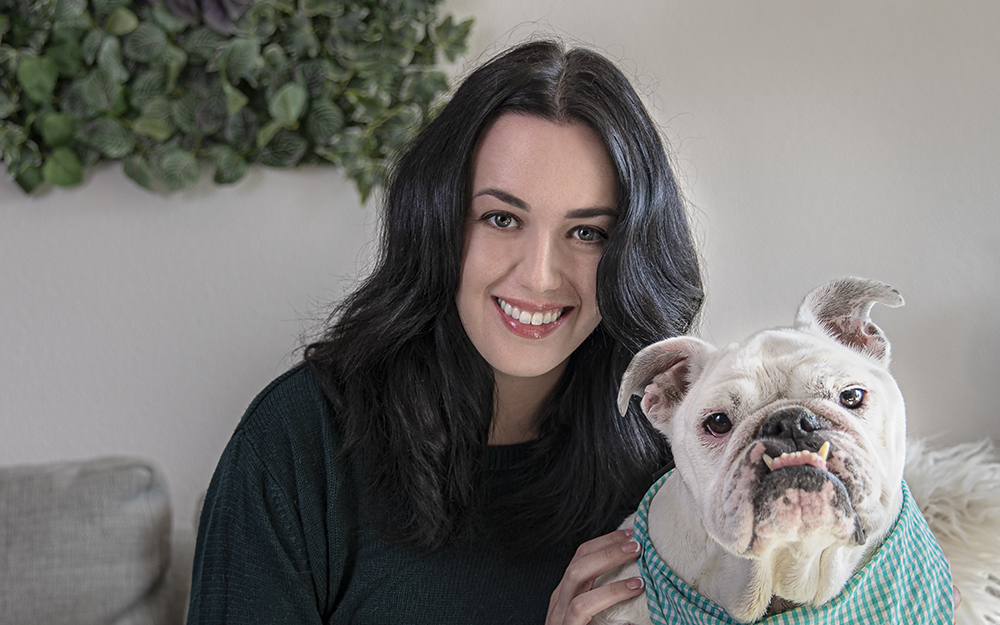 LOS ANGELES — (Aug. 3, 2022) — Holly Hammond faced one of the toughest-imaginable breast cancer scenarios. Her cancer was already advanced and had spread to her liver and lymph nodes when she discovered a tumor on her right breast. The tumor was negative for all of the markers that respond to targeted therapies for cancer treatment. She was also positive for the genes that mark her as especially prone to breast cancer.

Her doctor went to a then brand-new treatment strategy for her: A combination of immunotherapy and chemotherapy that was still being tested for Stage IV patients. Working with the drug manufacturer, her care team obtained the needed medication through a compassionate use program.

Three years later, Holly has no detectable cancer in her body. Inspired by Holly’s upbeat attitude, her care team at Cedars-Sinai Cancer in Tarzana problem-solved its way through Holly’s harrowing cancer journey. In doing so, notes oncologist Dr. Natasha Banerjee, “We may have cured what’s considered an incurable breast cancer.”

“Hey, so I have something to tell you. I have breast cancer,” she wrote. “My first surgery is tomorrow, and I’ll know more after that. As I sit here waiting for surgery and preparing for next steps, I just want to remind you to check your breasts, have your annual OB-GYN exams and get anything weird checked.”

Those four sentences encapsulate Holly’s essence. Sugarcoating and self-pity aren’t her thing. Holly defaults to caring about the wellbeing of others, even when her own wellbeing is at the mercy of stage 4 triple-negative breast cancer (TNBC) and the grim statistical reality that patients with this relentless disease generally survive for only 13 months.

“I can’t rely on statistics because all of the statistics for stage 4 TNBC say I died two years ago,” explains Holly. “The joke is on them. Stage 4 simply isn’t enough to take me down.”

In Sept. 2019, Holly, then 28, was trying to fall asleep when she felt a sharp pain in her right breast and quickly discovered a lump the size of a golf ball. Holly’s gynecologist referred her to Dr. Nimmi Kapoor, a breast surgical oncologist with Cedars-Sinai Cancer in Tarzana.

Dr. Kapoor performed a core needle biopsy followed by a lumpectomy. Holly’s care team then had the heart-wrenching task of telling her not only did she have stage 4 cancer, but it had spread to her liver. Dr. Kapoor also told Holly she had TNBC, explaining that this form of cancer is negative for the three markers that are often present in breast cancer and can serve as therapeutic targets. Without these targets, TNBC is much tougher to treat.

Genetic testing revealed that Holly had two of the most common risk factors for breast cancer.

First, she had a BRCA gene mutation: BRCA1 and BRCA2 are known as the breast cancer genes. Mutations in these genes can result in an 80% chance of developing breast cancer over a lifetime. Holly has a BRCA2 mutation. “Those with a BRCA1 or BRCA2 mutation are more likely to develop TNBC,” says Dr. Kapoor.

The immunotherapy-chemotherapy combination is a new addition to the limited therapeutic arsenal available to TNBC patients. In November 2020, the U.S. Food and Drug Administration (FDA) approved the combination of immunotherapy and single-agent chemotherapy for metastatic TNBC. In July 2021, the FDA approved an intensive regimen of four chemotherapy drugs plus pembrolizumab for stage 2 and stage 3 TNBC patients. When Holly was diagnosed with breast cancer, she already was at stage 4, which generally is considered incurable.“The spread of her cancer was limited to her liver and lymph nodes, so we decided to go with an intensive chemotherapy regimen that included immunotherapy, which was a treatment strategy that had not yet been fully approved for stage 4 patients and thus was not covered by insurance,” Dr. Banerjee explains.

“I wanted to treat Holly very aggressively and with full curative intent. Fortunately, we were able to obtain pembrolizumab free of charge from the manufacturer through its compassionate use program.”

“If there’s some residual cancer, it’s going to grow and show itself within a couple of months,” says Dr. Banerjee. “The fact that nothing has come back after two years actually means there’s a very good chance Holly’s cancer won’t return.”

Moving forward, Dr. Banerjee plans to see Holly every two to three months for blood work and to keep an eye out for signs of recurrence.

When Holly became a breast cancer patient, she simultaneously became an advocate for breast cancer awareness. Her Instagram posts are peppered with pleadings to her more than 12,000 followers to conduct monthly breast self-exams. She never misses an opportunity to emphasize the importance of women being familiar with their bodies and knowing their extended family’s medical history.

“Holly’s a very special person,” observes Dr. Banerjee. “Everyone who meets her feels that way.”

Dr. Kapoor, who performed Holly’s double mastectomy, offers this reflection: “Holly has been so resilient and very positive-amazingly positive. She knew how serious the situation was, but she held it together.”

A Southern California native and talented artist, Holly grew up in Laguna Beach. After graduating from Chapman University with a bachelor’s in digital arts, Holly held positions as an illustrator, animation director and promotional artist. She’s currently a freelance storyboard animation artist, a story illustrator and an author-she’s writing a book about late-stage cancer crashing her early adulthood. While it’s a conversation she never envisioned having, Holly doesn’t hesitate to discuss her cancer journey. “I’m happy to talk about it and share a lot of details,” Holly says. “If I can use this experience to connect with people who are going through what I’ve been through-or something similar-I can encourage them and let them know they can do it.”

On May 10 of this year, Holly had her last day of immunotherapy and posted a message on Instagram. “If I remain cancer-free, I’ll actually be considered cured,” she wrote. “Cured of what was previously thought to be a terminal disease. If I am cured, this is a huge, huge deal and will make this horrible diagnosis no longer a guaranteed death sentence. It could help a lot of people.”

Researchers explore how people adapt to cybersickness from virtual reality