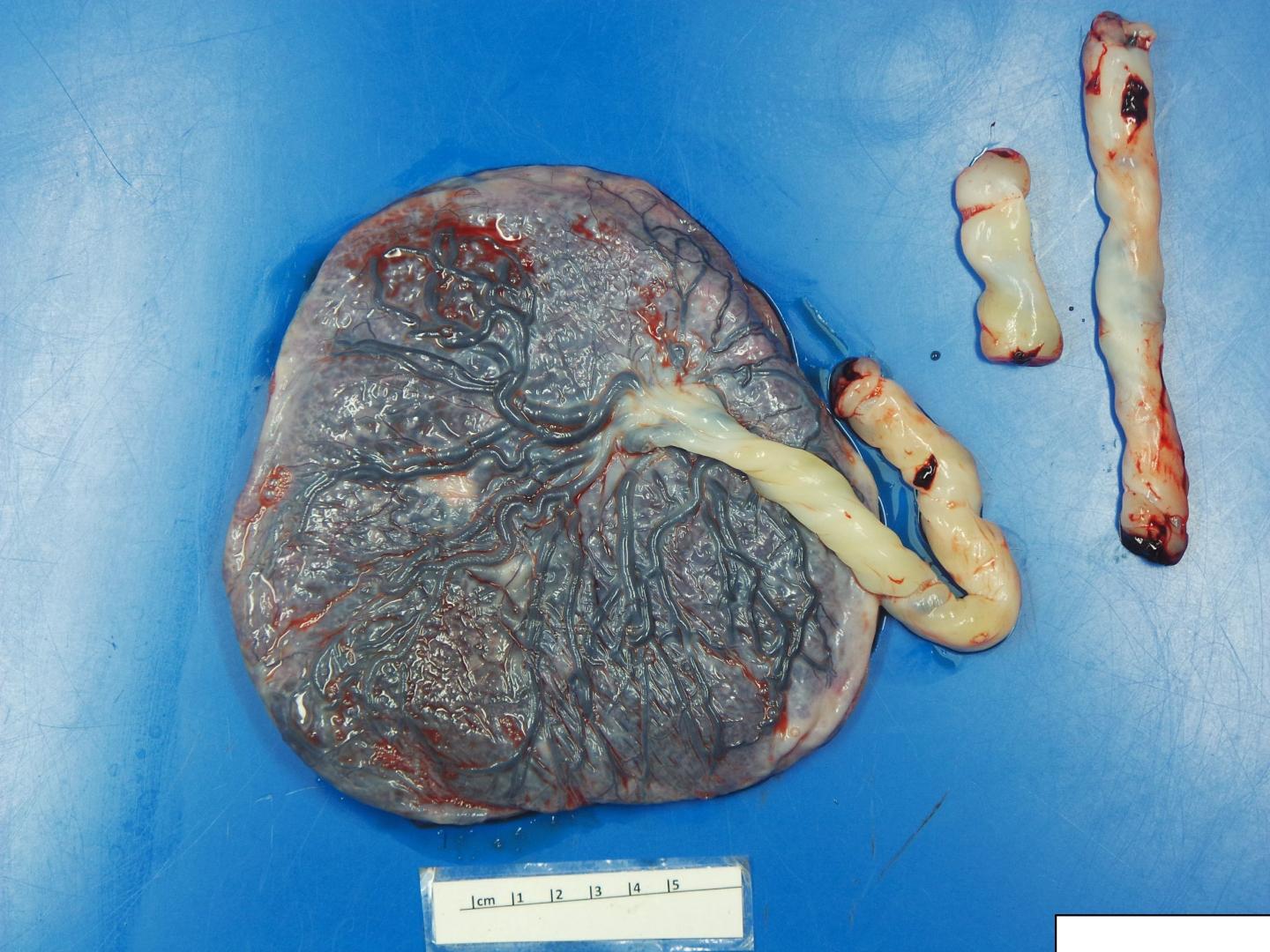 CHICAGO — The placentas from 16 women who tested positive for COVID-19 while pregnant showed evidence of injury, according to pathological exams completed directly following birth, reports a new Northwestern Medicine study.

The type of injury seen in the placentas shows abnormal blood flow between the mothers and their babies in utero, pointing to a new complication of COVID-19. The findings, though early, could help inform how pregnant women should be clinically monitored during the pandemic.

The study was published today (May 22) in the journal American Journal of Clinical Pathology. It is the largest study to examine the health of placentas in women who tested positive for COVID-19.

“Most of these babies were delivered full-term after otherwise normal pregnancies, so you wouldn’t expect to find anything wrong with the placentas, but this virus appears to be inducing some injury in the placenta,” said senior author Dr. Jeffrey Goldstein, assistant professor of pathology at Northwestern University Feinberg School of Medicine and a Northwestern Medicine pathologist. “It doesn’t appear to be inducing negative outcomes in live-born infants, based on our limited data, but it does validate the idea that women with COVID should be monitored more closely.”

This increased monitoring might come in the form of non-stress tests, which examine how well the placenta is delivering oxygen, or growth ultrasounds, which measure if the baby is growing at a healthy rate, said co-author Dr. Emily Miller, assistant professor of obstetrics and gynecology at Feinberg and a Northwestern Medicine obstetrician.

“Not to paint a scary picture, but these findings worry me,” Miller said. “I don’t want to draw sweeping conclusions from a small study, but this preliminary glimpse into how COVID-19 might cause changes in the placenta carries some pretty significant implications for the health of a pregnancy. We must discuss whether we should change how we monitor pregnant women right now.”

Previous research has found that children who were in utero during the 1918-19 flu pandemic, which is often compared to the current COVID-19 pandemic, have lifelong lower incomes and higher rates of cardiovascular disease. Flu doesn’t cross the placenta, Goldstein said, so whatever is causing life-long problems in those people is most likely due to immune activity and injury to the placenta.

“Our study, and other studies like it, are trying to get on the ground floor for this exposure so we can think about what research questions we should be asking in these kids and what can or should we do now to mitigate these same types of outcomes,” Goldstein said.

Fifteen patients delivered live infants in the third trimester, however one patient had a miscarriage in the second trimester. “That patient was asymptomatic, so we don’t know whether the virus caused the miscarriage or it was unrelated,” Goldstein said, “We are aware of four other cases of miscarriage with COVID. The other reported patients had symptoms and three of four had severe inflammation in the placenta. I’d like to see more before drawing any conclusions.”

The placenta is the first organ to form in fetal development. It acts as the fetus’ lungs, gut, kidneys and liver, taking oxygen and nutrients from the mother’s blood stream and exchanging waste. The placenta also is responsible for many of the hormonal changes within the mother’s body. Examining a woman’s placenta allows a pathologist to follow a retroactive roadmap of a woman’s pregnancy to learn what happened to the baby in utero or what could happen to both the mother and the infant after birth.

“The placenta acts like a ventilator for the fetus, and if it gets damaged, there can be dire outcomes,” Miller said. “In this very limited study, these findings provide some signs that the ventilator might not work as well for as long as we’d like it to if the mother tests positive for SARS-CoV2.”

The placentas in these patients had two common abnormalities: insufficient blood flow from the mother to the fetus with abnormal blood vessels called maternal vascular malperfusion (MVM) and blood clots in the placenta, called intervillous thrombi.

“There is an emerging consensus that there are problems with coagulation and blood vessel injury in COVID-19 patients,” Goldstein said. “Our finding support that there might be something clot-forming about coronavirus, and it’s happening in the placenta.”

The 16 women in the study delivered their babies at Northwestern Medicine Prentice Women’s Hospital. All tested positive for COVID-19. Four patients came in with flu-like symptoms three to five weeks before delivery and tested positive for the virus. The remaining patients all tested positive when they came in to deliver. Five patients never developed symptoms, others were symptomatic at delivery.

Between 30 and 40 patients deliver at Prentice daily. The team began testing placentas of COVID-19-positive mothers in early April. Fourteen of the live-born infants in the study were born full term and with normal weights and Apgar scores. One live-born infant was premature.

“They were healthy, full-term, beautifully normal babies, but our findings indicate a lot of the blood flow was blocked off and many of the placentas were smaller than they should have been,” Miller said. “Placentas get built with an enormous amount of redundancy. Even with only half of it working, babies are often completely fine. Still, while most babies will be fine, there’s a risk that some pregnancies could be compromised.”

In February, before the pandemic was known to have reached Chicago, Goldstein assembled his research team.

“If you get the flu and you’re pregnant, we know nothing about what that looks like in your placenta, so I began thinking how we’d study this flu-like epidemic if it came through Chicago,” Goldstein said. “We started setting things up and then lo and behold, the epidemic came here, so we were ready.”

Other Northwestern co-authors include Elisheva D. Shanes, Leena B. Mithal and Hooman A. Azad.