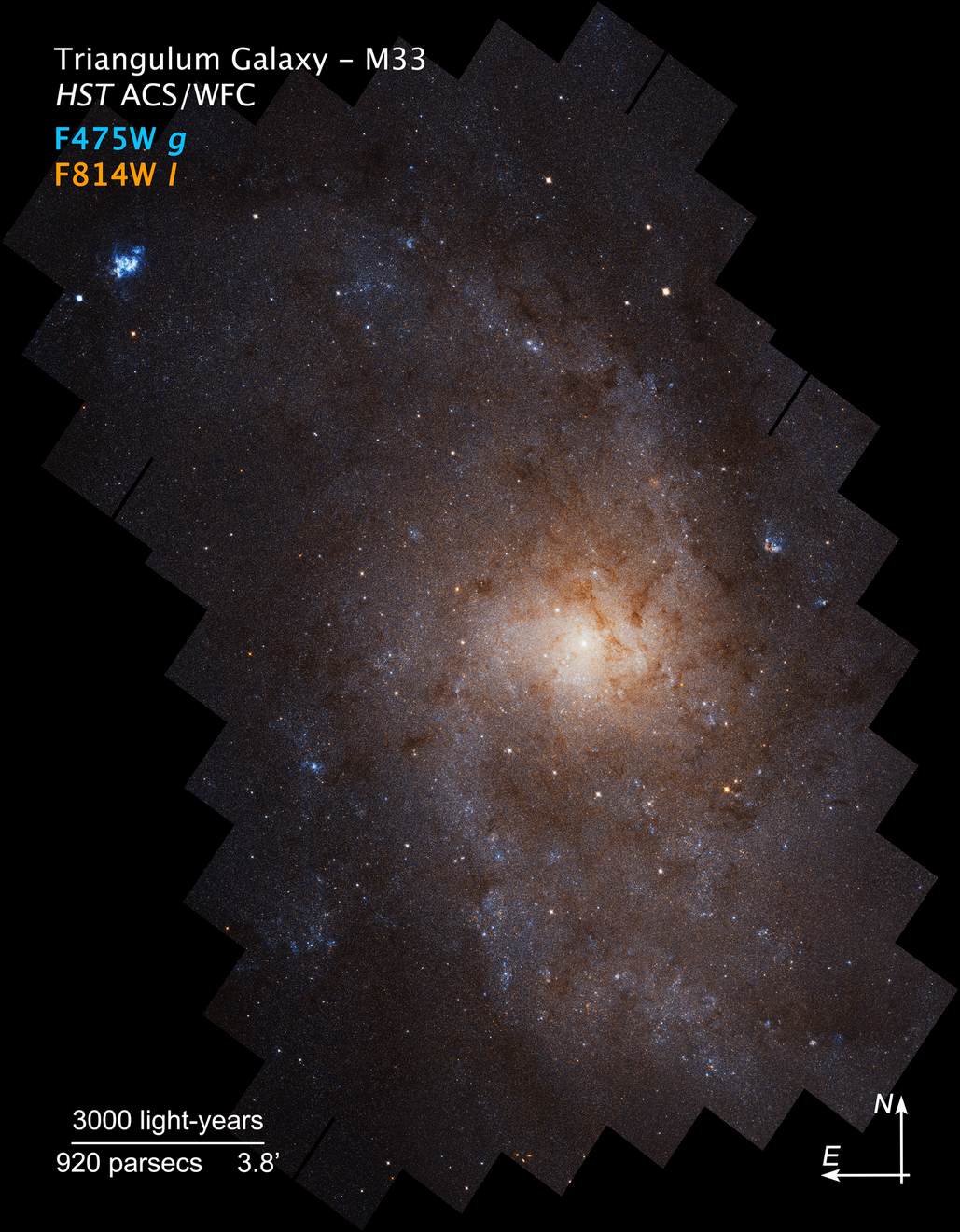 Astronomers have been gazing at the Triangulum galaxy for centuries. But they’ve never seen it quite like this.

On Jan. 11 at the 241st meeting of the American Astronomical Society in Seattle, a team led by scientists at the University of Washington and the Center for Computational Astrophysics unveiled results using the Panchromatic Hubble Andromeda Treasury Triangulum Extended Region — or PHATTER — survey. The endeavor is giving astrophysicists their first in-depth look at the distinct populations of stars that make up the Triangulum galaxy.

Researchers discovered that this satellite galaxy, a close companion of the much larger Andromeda galaxy, has two drastically different structures depending on the age of the stars.

“The youngest stars and the oldest stars in the Triangulum galaxy — which we can separate out using multiple wavelength filters on the Hubble Space Telescope — are organized very differently,” said Adam Smercina, a postdoctoral researcher at the UW. “This is surprising. For a lot of galaxies, like the Milky Way and Andromeda, the stars are distributed roughly consistently, regardless of their age. That is not the case with Triangulum.”

At about 61,000 light years across, Triangulum is the third-largest galaxy in our local group, after Andromeda and our own Milky Way. In lower-resolution images it has a “flocculent” structure – with many small spiral arms radiating out from a well-defined center.

For the PHATTER survey, the Hubble Space Telescope obtained hundreds of high-resolution images of different sections of the Triangulum galaxy in 108 orbits over the course of more than a year. The team tiled these smaller-section images together to create a comprehensive, high-resolution dataset for Triangulum that for the first time showed the galaxy’s individual stars over a large region in its center.

Thanks to Hubble’s array of filters, researchers could also separate those stars by age. The distribution of younger, massive stars — those less than 1 billion years in age — were roughly in line with the “flocculent” pattern, for which the Triangulum is so renowned. But its older, redder stars are distributed in a very different pattern: two spiral arms radiating out from a rectangular bar at the galaxy’s center.

“This was a largely unknown and hidden feature of the Triangulum galaxy that was very difficult to see without this kind of detailed survey,” said Smercina.

Old stars make up the majority of Triangulum’s mass, but are dimmer than their younger counterparts, according to Smercina. That could explain why the “flocculent” pattern prevails in low-resolution images of the galaxy.

The survey team also does not know why young and old stars have such divergent distributions in Triangulum. Satellite galaxies in general are an eclectic bunch, and many questions remain about their formation and evolution. Satellite galaxies come in many different shapes and can be molded by interactions with their parent galaxies. The Milky Way’s largest satellite galaxy, the Large Magellanic Cloud, for example, is similar in size and mass to Triangulum, but has an irregular and globular shape due to its proximity to our own galaxy.

The PHATTER survey’s on-going analysis should shed light on how these types of galaxies form and interact with their larger neighbors. The team plans to follow up on these initial findings by tracing the history of star formation in Triangulum, comparing different sections of the galaxy.

“A major goal of the PHATTER survey was to generate the kind of detailed, high-resolution data on this prominent satellite galaxy that will allow us to examine its structure in depth, trace its history of star formation and compare what we see to theories of galaxy formation and evolution,” said Smercina. “We’re already finding surprises.”

Other team members include Julianne Dalcanton, director of the Center for Computational Astrophysics in New York, a UW professor of astronomy and principal investigator of the PHATTER project; UW research associate professor of astronomy Benjamin Williams; UW doctoral student Meredith Durbin; and Margaret Lazzarini, a postdoctoral researcher at Caltech.

Corresponding events at the 241st meeting of the American Astronomical Society in Seattle: