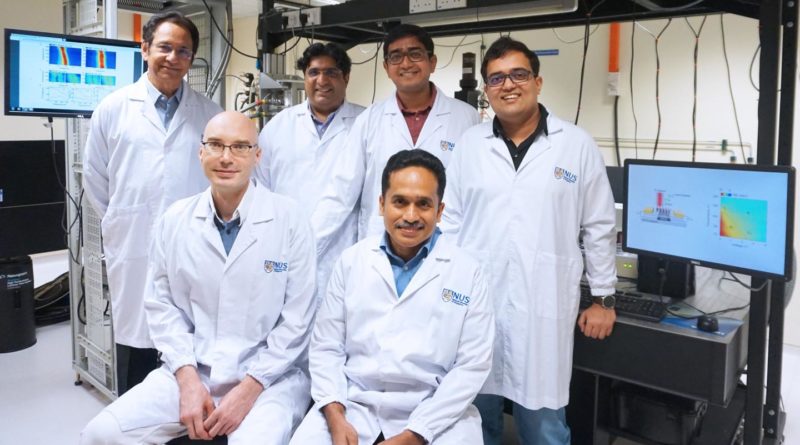 A new quasiparticle named ‘polaronic trion’, discovered in molybdenum disulphide (MoS2) by a team from the National University of Singapore (NUS), could be used to design an optical modulator for visible light that is controlled by both temperature and electric fields.

The research effort for this breakthrough was led by Professor T Venky Venkatesan, Director of the NUS Nanoscience and Nanotechnology Institute (NUSNNI), and was published in

The formation of the new quasiparticle

A quasiparticle is essentially a composite formed due to the interaction of elementary particles. For instance, the coulomb interaction between oppositely charged particles, both electrons and holes, in a semiconductor gives rise to a quasiparticle, known as the ‘exciton’. “Recently it was reported that in electron-rich semiconductors, an extra electron can bind to an exciton to form a new quasiparticle called the ‘trion’,” shared Prof Venkatesan.

In this case, the researchers discovered that when an atomically thin layer of MoS2 is grown on a single crystal of strontium titanate (SrTiO3), the charged trion in MoS2 can further interact with the atomic vibrations of the SrTiO3 lattice to form a new quasiparticle. The nature of this interaction is similar to that between electrons and lattice vibrations (or phonons) in solids, giving rise to another quasiparticle known as a ‘polaron’. Hence, they dubbed the new quasiparticle a ‘polaronic trion’.

“The polaronic trion can be visualised like a Russian Tea doll, or Matryoshka. Inside the polaronic trion is a bare trion, inside which is an exciton that itself is made from electrons and holes,” explained Associate Professor Shaffique Adam, one of the lead authors of the work, who is from the NUS Department of Physics, Yale-NUS College and the Centre for Advanced 2D Materials (CA2DM).

The significance of the polaronic trion

“Trions and excitons in 2D materials like MoS2 are interesting because these can absorb and emit light,” said Dr Soumya Sarkar, the first author of the publication who is from NUSNNI and the NUS Graduate School for Integrative Sciences and Engineering. He discovered this phenomenon during his doctoral research under Prof Venkatesan.

He added, “Usually, phonons have energies that are too large to couple with a trion. This is where the SrTiO3 crystal is special because it undergoes a structural phase transition at temperatures below -120°C and gives rise to a particular atomic vibration, the soft mode.”

This soft mode has an energy which is of the same order with that of the bare trion, and enables a strong coupling between the trion of MoS2 and SrTiO3 phonons to form the new entity, the ‘polaronic trion’. While normal lattice vibrations decrease as the crystal freezes at low temperatures, the soft mode vibration, on the other hand, is highly enhanced, consistent with the observations.

Another important property of this quasiparticle is its sensitivity to electric fields. Dr Sreetosh Goswami from NUSNNI, who is one of the lead authors of this paper, elaborated, “What we are observing here is a many-body interaction and tuning that interaction with an external electric field. This is the Holy Grail in condensed matter physics, and such examples are quite rare.”

He continued, “For me, the most exciting part of this entire study is the electric field tunability of polaronic trions by manipulating the soft phonons in SrTiO3. The ability to tune its binding energy by almost 40 meV using a voltage bias is much more than any other that was previously reported, and requires only a meagre amount of external energy.”

Theoretically, the coupling is unusual as this is the first observation of such a strong interfacial phonon coupling involving rotational phonons. “We have extended an old result by Feynman and Fröhlich to explain this interaction. In fact, 2D materials interact strongly with their environment and this was crucial to this coupling,” added Dr Maxim Trushin, a theoretical physicist at CA2DM who performed all the calculations included in the paper and proposed the quasiparticle picture to explain the observed phenomenon.

Dr Sinu Mathew, who initiated the 2D materials effort at NUSNNI under Prof Venkatesan and is a key player in this research, provided a broader picture to this discovery. He said, “90 per cent of the research on 2D materials uses SiO2 or hexagonal boron nitride as substrates. Those might be great to explore quantum properties of 2D materials, but if you want to explore interface interactions, oxide substrates can be far more interesting as they have rich quantum functionalities. In this paper we report the interaction between MoS2 and SrTiO3, but there is a lot more room to explore.”

Recently, there has been a lot of excitement regarding exciton-based interconnects. “The polaronic trion is charged and hence it would be easier to guide with applied voltages, thereby making it a key player in this area,” concluded Prof Venkatesan. “In fact we have already started observing polaronic trions in other 2D semiconductors and are working to demonstrate a functional device based on this new quasiparticle.”

This part of information is sourced from https://www.eurekalert.org/pub_releases/2019-08/nuos-nrd082619.php