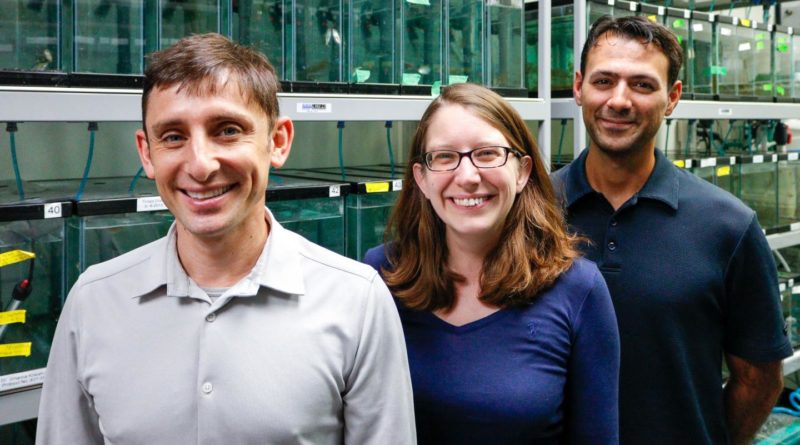 How is it that a fish that lived in difficult to access caves in rural Mexico is becoming a leading model to study diabetes, insomnia, and obesity? It’s all about this tiny, translucent, cave-dwelling fish that lost its eyes to evolution and a “dream team” of young scientists who have joined forces to revolutionize this model system for research. About the size of a guppy, the blind Mexican cavefish, (Astyanax mexicanus) became trapped in caves hundreds of thousands of years ago, and developed many traits that mimic human disease. Scientists are now exploiting these traits to better understand how sleep and metabolism are regulated.

This unusual fish has recently emerged as a powerful system for addressing questions in evolutionary biology and genetics of trait variation. Unlike fruit flies and laboratory mice that are commonly used in laboratory research, the scarcity of available tools to manipulate genes in this species as well as methods for tissue-specific manipulation of function have prevented researchers from using these fish to study gene function.

To address this limitation, researchers from Florida Atlantic University and collaborators have received a three-year, National Science Foundation EDGE grant totaling $1,148,464 to integrate the expertise of multiple laboratories at FAU, Stowers Institute for Medical Research in Kansas City, the University of Minnesota, and Barr-Ilan University in Israel to develop powerful transgenic tools and gene-editing technologies in the blind Mexican cavefish to significantly advance it as a research model system. The grant seeks to build on pioneering work that has developed brain imaging and gene editing technology and methods for measuring sleep and obesity in this fish model.

“Scientists in many disciplines working on the genetic basis of morphological, physiological and behavioral adaptation will have access to the new tools we are developing for this project,” said Erik Duboué, Ph.D., principal investigator and an assistant professor of biology in FAU’s Harriet L. Wilkes Honors College. “From talking to colleagues, we think there is enormous interest in these fish, but researchers have limited ability to obtain them. Part of this grant will fund an international stock center that will allow more scientists to study cavefish.”

The combined tools and the stock centers distribution plan will significantly propel blind Mexican cavefish research and position them as a model for understanding the genetic basis of developmental, behavioral evolution, and human disease. The project will enable research into the molecular mechanisms governing evolved traits and will expand the use of these technologies into diverse biological areas including behavior, physiology and metabolism.

“We plan on developing three distinct toolkits to build the blind Mexican cavefish into a fundamental model system that will provide for precise manipulation of gene expression and function through the application of genomic tools commonly used in drosophila or fruit flies, zebrafish and mice,” said Johanna Kowalko, Ph.D., co-principal investigator and an assistant professor of biology in FAU’s Harriet L. Wilkes Honors College. “The methodology we establish will readily be applied to other fish models such as the African cichlids, which are commonly found in pet stores and used by scientists as a model of evolution, and Turquoise Killfish that are used to study aging.”

The blind Mexican cavefish consists of more than 29 geographically isolated cave populations and an existing ancestral surface fish; all cavefish have evolved independently of one another, and have evolved directly from the ancestral surface fish. The blind Mexican cavefish has a well-defined evolutionary history, sequenced genome, and an ability to generate hybrids between independently evolved cave and surface populations, positioning it as an emergent model system.

Collaborators on the NSF EDGE award comprise of a talented research team that includes Duboué; Alex Keene, Ph.D., an associate professor of biological sciences in FAU’s Charles E. Schmidt College of Science, and director of the Program in Neurogenetics, who first described insomnia in this fish; Suzanne McGaugh, Ph.D., an assistant professor of ecology, evolution and behavior at the University of Minnesota, who sequenced their genome; Nicolas Rohner, Ph.D., an assistant investigator at the Stowers Institute for Medical Research, who described obesity and diabetes in this model; and Kowalko, who implemented gene-editing.

“This collaboration brings together five outstanding scientists with unique and complementary strengths in diverse approaches such as transgenic, genomics, and functional assessment of morphological, behavioral, and physiological aspects of cavefish biology and genome editing,” said Rod Murphey, Ph.D., associate vice president for academic affairs, FAU’s John D. MacArthur Campus. “This NSF EDGE grant was extremely competitive. To have two of our young and talented investigators spearheading the project is both unique and a testament to their skills and cutting-edge research. We have neuroscientists at Florida Atlantic University who are doing genome-editing and brain imaging in animals people normally see in aquariums, and developing models of diabetes and insomnia.”

Duboué and Kowalko will be collaborating with Keene, a leading neuroscientist whose research is focused on understanding the neural mechanisms of sleep loss in Mexican cavefish. The Keene Laboratory is aimed at addressing a central challenge in neuroscience to understand how genes and neural circuits regulate behavior.

“I think there’s remarkable potential for this cavefish animal model,” said Keene. “One of the most interesting things about this fish model is that they barely sleep and they are obese and diabetic, yet they appear to be completely healthy. The genetic tools that will be developed with this NSF funding might allow us to understand why some humans are highly susceptible to neurological and metabolic disease, while others are resilient.”

Lior Appelbaum, Ph.D., an associate professor at the Mina and Everard Goodman Faculty of Life Sciences at Bar-Ilan University, also is a collaborator on the project.

The project integrates training for all levels of scientists to enhance science literacy and understanding of genomic advances as well as targeted engagement of public groups ranging from K-12 students to the broader adult community. The team is working with local teachers to develop age-appropriate lessons for active learning to bring cavefish to the classroom. They also are engaging the adult community with a cavefish podcast and will establish a gene editing course for scientists working on non-model fish systems.

About Florida Atlantic University:
Florida Atlantic University, established in 1961, officially opened its doors in 1964 as the fifth public university in Florida. Today, the University, with an annual economic impact of $6.3 billion, serves more than 30,000 undergraduate and graduate students at sites throughout its six-county service region in southeast Florida. FAU’s world-class teaching and research faculty serves students through 10 colleges: the Dorothy F. Schmidt College of Arts and Letters, the College of Business, the College for Design and Social Inquiry, the College of Education, the College of Engineering and Computer Science, the Graduate College, the Harriet L. Wilkes Honors College, the Charles E. Schmidt College of Medicine, the Christine E. Lynn College of Nursing and the Charles E. Schmidt College of Science. FAU is ranked as a High Research Activity institution by the Carnegie Foundation for the Advancement of Teaching. The University is placing special focus on the rapid development of critical areas that form the basis of its strategic plan: Healthy aging, biotech, coastal and marine issues, neuroscience, regenerative medicine, informatics, lifespan and the environment. These areas provide opportunities for faculty and students to build upon FAU’s existing strengths in research and scholarship. For more information, visit fau.edu.

This part of information is sourced from https://www.eurekalert.org/pub_releases/2019-08/fau-na082819.php