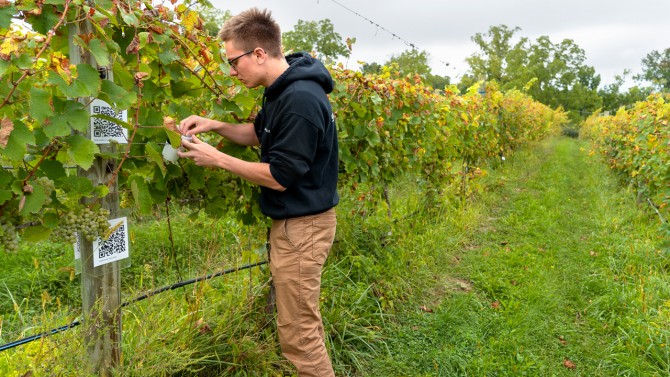 ITHACA, N.Y. – The seeds of space exploration are being planted in several New York state vineyards. They’ve also been attached to dairy cows. And they may be showing up at a dog park near you.

Doctoral student Hunter Adams is deploying thumbnail-size satellites to monitor environmental conditions as a dry run for using the technology for future space research. At the same time, he is harvesting valuable data that will help growers make more informed decisions about growing crops and caring for animals.

“Earth is a really convenient planet to do these proof-of-concept studies. It’s a case study for a planetary science mission where the planet happens to be Earth,” Adams said. “Each satellite is its own little autonomous device, but you can think of them as a big distributed sensor when dozens or hundreds of them are deployed simultaneously. Anytime you’re trying to study something that changes significantly over space and over time, that’s the kind of sensor you want to use.”

The satellites, which Adams has dubbed Monarchs, are a customized version of the ChipSat technology first developed in the lab of Mason Peck, professor of mechanical and aerospace engineering and former NASA chief technologist.

Adams modified the initial ChipSat design to survey agricultural conditions, including temperature, humidity and ambient light. In July, he deployed 20 Monarchs at the Anthony Road Vineyard in Penn Yan, New York, and a month later he installed another 20 at the Cornell teaching vineyard in Lansing, New York. Each device was encased in a small plastic foam cup, so its temperature readings wouldn’t be thrown off by sustained exposure to direct sunlight, and attached to a vine. Every 20 minutes, the Monarchs would wake up and transmit their data to a small, off-the-shelf single-board computer on site.

Ordinarily, vineyard and orchard managers rely on weather stations to inform their management decisions, such as when to schedule fungicide and pesticide sprays. But environmental conditions like temperature and humidity can vary in cool climate regions like in upstate New York, even within a single vineyard, Adams said.

“This is particularly true overnight, when the leaf canopies trap cool, humid air in their interior. If you’re not in there measuring that cool, humid air, you end up with a different temperature reading,” he said. “I’ve been able to show a difference of up to 6 degrees Fahrenheit inside the canopy versus at the weather station. It’s not huge, but over enough days that can affect a maintenance decision.”

The Monarchs have also shown that temperature and humidity vary significantly between the vineyard and down the slope toward Cayuga Lake, where the water functions as a heat sink and regulates the temperature.

Vineyards aren’t the only places the Monarchs have landed. Adams is working with Francisco Leal-Yepes, clinical instructor of ambulatory and production medicine in the College of Veterinary Medicine, to use the devices to study how air quality and physical activity correlate to respiratory problems among dairy cows. Adams outfitted 10 newborn calves at Sunnyside Farm in Scipio Center, New York, with dog collars affixed with Monarchs.

By tracking the calves’ high frequency movements, the researchers can map the daily habits of specific animals – where they go, how often they eat – which could help dairy farmers quickly identify changes in a calf’s daily routine that might signal it is sick.

“The earlier you can tell a dairy farmer that a calf isn’t feeling well, the better,” Adams said.

Monarchs have all the sensors that would be found on a conventional satellite. They include a magnetometer, a gyroscope, GPS and an antenna. They can make altitudinal and directional determinations, and they contain embedded torque coils so they can turn themselves into electromagnets to change their orientation via Earth’s magnetic field. And, crucially, Monarchs are mass manufacturable, which means they can be stamped out of a machine without any human interaction, and at low cost. Thanks to advancements in cellphone and gaming technology, the device’s surface-mount sensors and processors can be made quite cheaply. Produced in bulk quantities of several thousand or more, Adams estimates they would cost roughly $50 apiece.

The relatively low price tag also means Monarchs are easily disposable – they burn up in the atmosphere after usage so as not to end up as space litter. And since the devices are intended to function as a dispersed group, an individual satellite is expendable, making ChipSats the first type of space technology that can be lost or accidentally crushed in your pocket without jeopardizing the research mission.

“If I show one of these things to an old-school NASA guy, there’s this kneejerk reaction of ‘Oh, radiation will kill that’ or ‘The data out of that is going to be horrible,’” Adams said. “They’re actually right about both those things, but that’s not really the point. This one might die, but I’m going to launch 1,000 of them, and 100 will survive. The data rate out of one is going to be very low compared to your conventional satellite, but the data rate out of the collective is competitive with those of commercial satellites.”

In order to get a clearer sense of the agricultural uses for his Monarchs, Adams participated in Cornell Engineering’s Commercialization Fellowship program, which provides six months of funding for engineering doctoral students to explore potential industrial applications of their inventions. The funding enabled Adams to visit vineyards along Cayuga and Seneca lakes, as well as travel to New Zealand and California’s Napa Valley to interview managers and owners. Through that process, Adams identified vineyards and orchards as being the most immediate beneficiaries of his technology.

“The most important aspect for a commercial application of these things is actionability,” Adams said. “So if I tell a vineyard manager that part of his or her vineyard is getting too cold, there’s actually something they can do about that in a lot of cases.”

While drones and other advances in digital agriculture have helped growers modernize their practices, many of those tools rely on remote sensing, according to Peck. Using a distributed swarm of ChipSats to capture an up-close view of individual fruit has the potential to “change the paradigm,” he said, and that could have implications for any number of crops throughout New York state and beyond.

“I’m confident that if we use these ChipSats as sensors in an agricultural environment, we’re going to end up saving money, improving the yield for crops, and probably lowering the cost of all the things that we farm in this state,” Peck said. “Grapes are just the beginning. We could find different applications, particularly for more artisanal crops or crops that require more nurturing. That can only be good for the agricultural economy in the state, and much more broadly, for New York products being able to be sold across the nation or around the world.”