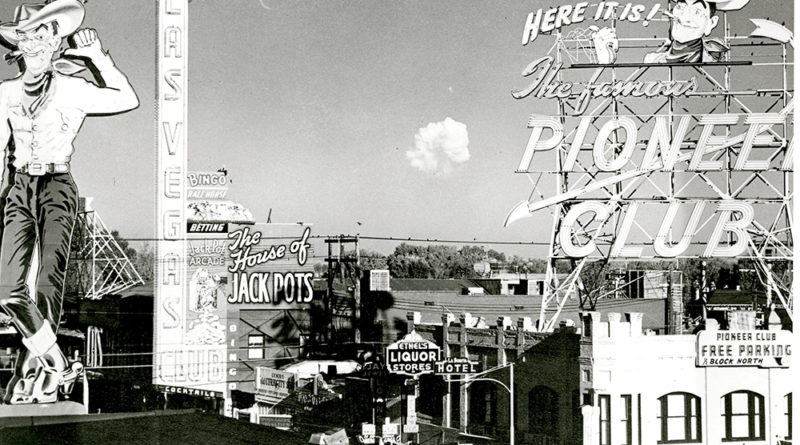 ROLLA, Mo. –  A Las Vegas historian is telling the behind-the-scenes story of the city’s meteoric rise into becoming the multi-billion dollar tourist industry it is today in a new book.

“The rise in Las Vegas tourism from one million visitors in 1950, to ten million in 1960 was no accident,” says Dr. Larry Gragg, a Curators’ Distinguished Teaching Professor emeritus of history and political science at Missouri University of Science and Technology.

Gragg’s book, Becoming America’s Playground: Las Vegas in the 1950’s, will be released on Thursday, Aug. 29, and offers a behind-the-scenes look at the development of tourism in Las Vegas. The publication is his ninth book and third about Las Vegas culture, and the first to exclusively focus on Las Vegas in the 50s.

From his earlier research on Las Vegas, Gragg says it became clear that the city’s deliberate publicity strategies deployed from 1950 to 1960 were pivotal in changing the perception of Las Vegas from a regional tourist destination, where one could legally engage in gambling and access legalized prostitution just outside the city limits, to a family vacation spot filled with entertainment options and surrounded by scenic beauty.

Las Vegas and Clark County grew substantially during World War II due to the employment provided by the Las Vegas Air Force Base Aircraft Gunnery School and the Basic Magnesium Plant in nearby Henderson, Nevada. But when the war ended, employment opportunities were scarce, Gragg notes.

“Las Vegas was searching for a way to provide continued employment for its residents and to grow the community,” Gragg says. “At the time, post-war Americans felt a need to escape, and the Las Vegas Chamber of Commerce saw a chance to capitalize on the town’s reputation for leisure.”

The book describes how the unconventional, yet highly successful, promotional strategies of Steve Hannagan, a well-known publicist hired by the city of Las Vegas between 1948 and 1949, propelled the city’s growth of tourism. By ignoring Las Vegas’ image as a gambling resort and heavily promoting it as the hub of a scenic wonderland where families would want to vacation, Hannagan began to change the city’s public perception.

Las Vegas couldn’t afford Hannagan’s services very long, but because his approach was working, the Las Vegas News Bureau continued to build the publicity by implementing the “Hannagan Method” on its own.

One insider mentioned in the book who was privy to the Hannagan method is Don English, a popular photographer at the time. English had previously worked for Hannagan and came to Las Vegas in 1949 to join the News Bureau. He recalled the daily morning ”hometown run” where news staff photographed small-town couples in front of their hotels, then sent the photos to the subjects’ hometown newspapers to publish so their friends and neighbors would be inspired to make the same trip.

Las Vegas publicity in this era also revolved around the Nevada Test Site, situated 65 miles outside the city. English’s famous promotional photos include a striking black and white image of a nuclear detonation cloud framed by the iconic neon “Vegas Vic” and the Pioneer Club sign.

From 1950 to 1960, Las Vegas had the highest per capita income in the U.S., hotel building was thriving and the city was deeply segregated. In an interview with platinum album recording star Johnny Mathis (known for his hits like “Chances Are” and “Misty”), Gragg learned that after his performances, Mathis was shuffled to the west side of Las Vegas, where most black residents lived, because African Americans were not welcome to stay in the same hotels with white guests. Mathis described his experience as “almost like watching a sad, sad movie.”

Gragg’s chronicle also delves into the role of organized crime in the city and its discrimination and slow evolution of the advancement of women. Overall, the book presents a wealth of little-known facts and personal stories from the 1950s that began making Las Vegas the glitzy, escapist playground it is today.