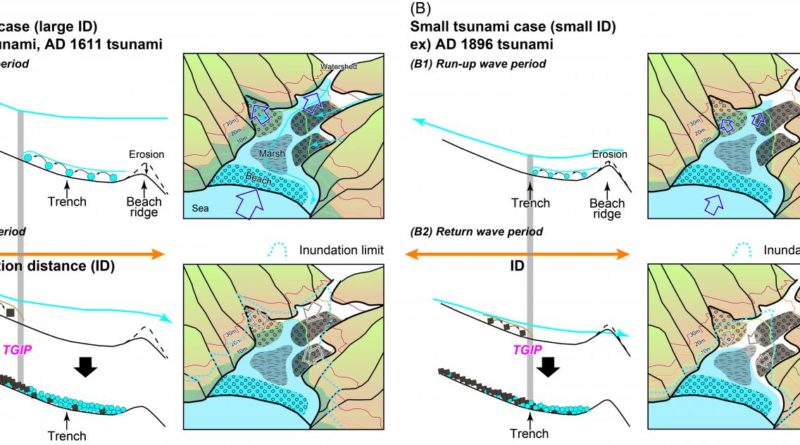 Tokyo, Japan – Scientists from Tokyo Metropolitan University and Ritsumeikan University have found a link between the “roundness” distribution of tsunami deposits and how far tsunamis reach inland. They sampled the “roundness” of gravel from different tsunamis in Koyadori, Japan, and found a common, abrupt change in composition approximately 40% of the “inundation distance” from the shoreline, regardless of tsunami magnitude. Estimates of ancient tsunami size from geological deposits may help inform effective disaster mitigation.

Tsunamis are one of nature’s most devastating hazards; understanding their scale and mechanism is of paramount scientific and socio-economic importance. Nevertheless, despite our best efforts to study and understand them, their infrequent occurrence can make quantitative studies difficult; tsunami-causing seismic events around subduction zones (where one tectonic plate dips underneath another plate) recur once every 100 to 1,000 years, significantly reducing the number of accurately documented events. It is highly desirable that we gain some understanding by looking at geological deposits instead. However, despite some success in finding the number and age of past events, it is not yet possible to estimate the magnitude of ancient tsunamis, particularly in narrow coastal lowlands like the Sanriku Coast in Japan, struck by the 2011 Tohoku earthquake and tsunami.

Therefore, Assistant Professor Daisuke Ishimura from Tokyo Metropolitan University and Postdoctoral Fellow Keitaro Yamada from Ritsumeikan University carried out studies of gravel samples collected from bore holes and the trench in Koyadori, situated in the middle of the Sanriku coastline. Geological samples were taken corresponding to three tsunami events (AD 1611, 1896 and 2011) whose magnitudes are known, specifically their “inundation distance,” or how far they reach inland. They used automated image analysis to study how “round” each gravel particle was in their samples, giving 10 to 100 times more data than existing, manual methods. Comparing distributions with measurements of modern beach and fluvial (river) gravels, they found that they could map the number ratio between beach and fluvial gravel. They discovered that this ratio suddenly changed at a certain distance away from the sea. This point was named the “Tsunami Gravel Inflection Point” (TGIP); it is thought to arise from “run-up” (incoming) waves bringing beach material inland and “return” waves drawing inland material towards the sea. Although the TGIP occurred at different locations for each event, they found that it was always approximately 40% of the inundation distance. They applied this finding to samples corresponding to even older tsunamis, providing estimates for the size of events along the Sanriku Coast going back approximately 4,000 years for the first time.

Although the researchers believe this ratio is specific to the local topography, the same analysis may be applied to characterize other tsunami-prone locations. An accurate estimate of the extent of ancient tsunamis will expand the number of events available for future research to study the mechanisms behind tsunamis, helping to inform effective disaster mitigation and the planning of coastal communities.

This work has been published in

This part of information is sourced from https://www.eurekalert.org/pub_releases/2019-08/tmu-dts082119.php