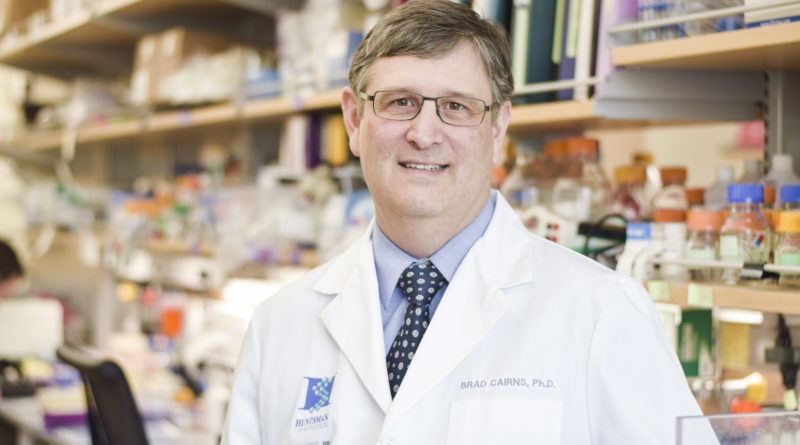 SALT LAKE CITY – Cellular machines that control chromosome structure, such as the RSC complex, are mutated in about one-fifth of all human cancers. Now, for the first time, scientists have developed a high-resolution visual map of this multi-protein machine, elucidating how the RSC complex works and what role it has in healthy and cancer cells. The study was co-led by Bradley Cairns, PhD, cancer researcher at Huntsman Cancer Institute (HCI) and professor and chair of oncological sciences at the University of Utah, along with Ning Gao, PhD, at Peking University and Zhucheng Chen, PhD, at Tsinghua University in China. The study was published today in the journal Science.

A process known as gene expression underlies the behavior of every cell in all living organisms. Gene expression provides cells with a blueprint that orchestrates their behavior, including growth, death, and responses to changes in the cellular environment. Gene expression is necessary for living healthy and cancer cells; however, cancer cells express genes that carry a defective set of instructions that often lead to uncontrolled growth. The RSC and related complexes are crucial regulators of chromosome structure and gene expression. Once the RSC complex binds to the genome, it executes machine-like movements that expose segments of DNA in chromosomes, leading to the initiation of gene expression.

Nearly 20 years ago, Cairns discovered the RSC complex and later added to his findings by identifying many of its protein components and revealing its machine-like behavior. Now, Cairns and his colleagues have established how this complex works in conjunction with the cellular machinery. He believes these findings will yield highly significant insights into how certain cancers develop. “The RSC complex plays an important role in both healthy and cancer cells,” says Cairns. “Now, we can accurately visualize a high-resolution map of the RSC complex, including all of its components. We can see how the complex interacts with, and moves, chromosomes and DNA. This provides crucial information that helps us understand how RSC-like complexes are involved in cancer.”

Previous studies led to lower resolution models of the RSC complex, but many questions remained unanswered, including how the subunits of this complex assemble and interact with the chromosomal genome. Cairns and his colleagues, including lab members Cedric Clapier, PhD, and Naveen Verma built on existing knowledge using yeast cells, a classic model system to study chromosomes and gene expression. They utilized new and sophisticated microscopic techniques that allowed them to visualize chromosomal structures in high detail. Cairns and his colleagues were able to study the RSC complex in depth by developing numerous cell lines that contained both normal and mutated versions of the RSC complex. Next, their team studied yeast RSC using cryo-electron microscopy – a technology that has only become available in recent years. This tool allows scientists to view the architecture of large, sophisticated cell components at a high-resolution molecular level.

The scientists are now using this information to understand the RSC complex and its role in cancer further. “This study has crucial implications for our ability to understand how chromosomal genes in healthy and cancer cells are exposed and expressed,” said Cairns. “This type of information is a critical step in the processes that scientists use to develop new drugs and understand the genomic characteristics of a tumor.”

This research was supported by the National Cancer Institute grants P30CA042014, R01CA201396, and U54 CA231652; Howard Hughes Medical Institute, Huntsman Cancer Foundation, the Ministry of Science and Technology of China, and the National Natural Science Foundation of China.

Huntsman Cancer Institute (HCI) at the University of Utah is the official cancer center of Utah. The cancer campus includes a state-of-the-art cancer specialty hospital as well as two buildings dedicated to cancer research. HCI treats patients with all forms of cancer and is recognized among the best performing cancer hospitals in the country by U.S. News and World Report. As the only National Cancer Institute (NCI)-Designated Comprehensive Cancer Center in the Mountain West, HCI serves the largest geographic region in the country, drawing patients from Utah, Nevada, Idaho, Wyoming, and Montana. More genes for inherited cancers have been discovered at HCI than at any other cancer center in the world, including genes responsible for hereditary breast, ovarian, colon, head, and neck cancers, along with melanoma. HCI manages the Utah Population Database, the largest genetic database in the world, with information on more than 11 million people linked to genealogies, health records, and vital statistics. HCI was founded by Jon M. and Karen Huntsman.