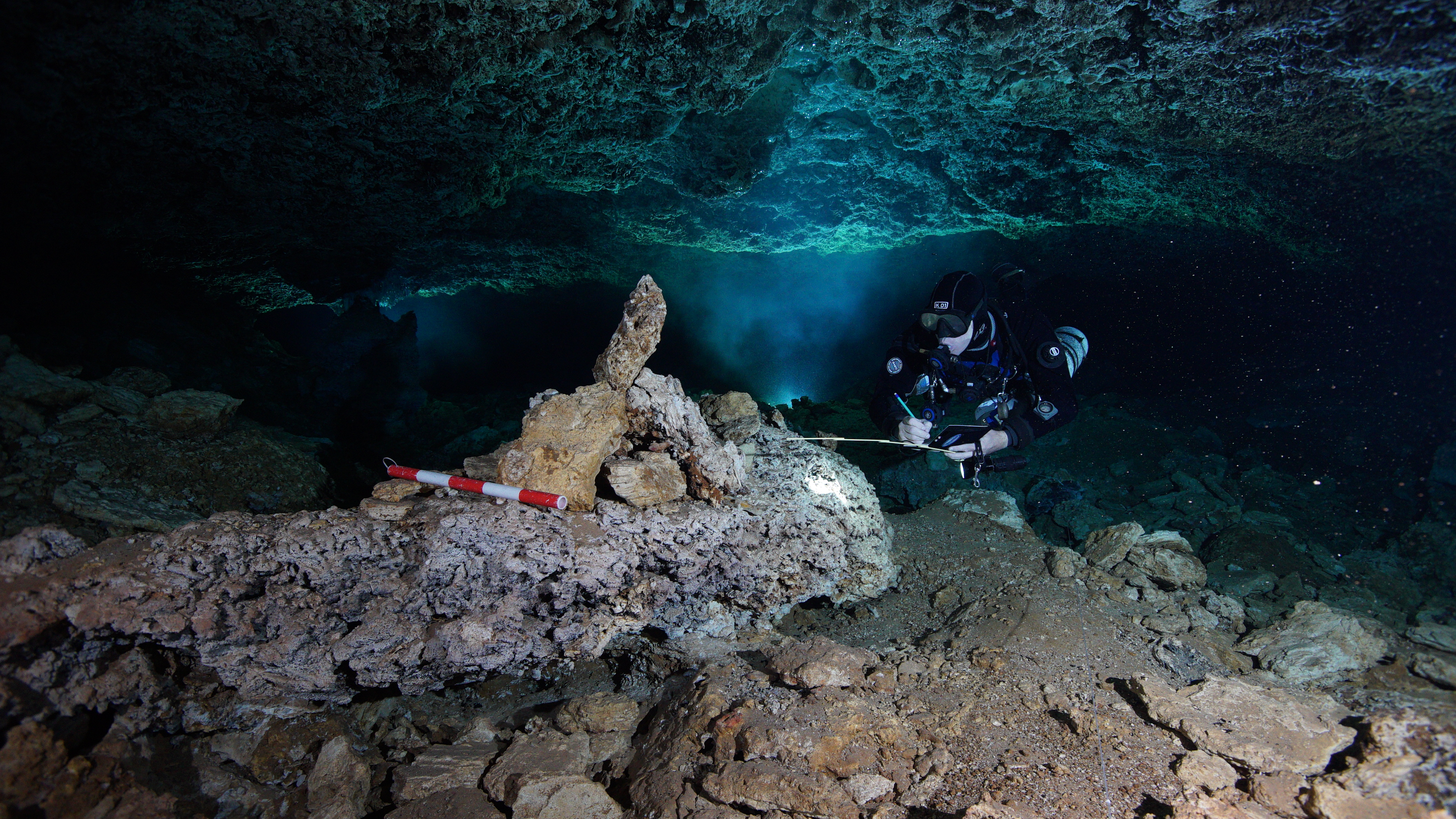 QUINTANA ROO, MEXICO (JULY 3, 2020) — A team of underwater cave explorers in Mexico have made unprecedented archeological discoveries in some of the most inaccessible places on Earth that unlock key mysteries about the earliest inhabitants of the Western Hemisphere, according to international experts who have studied the sites.

The finds reveal new details about important facets of life for these earliest Americans, about which almost nothing was previously known. They also open rare new areas of archeological exploration.

In the first study on the new discoveries, published today in the journal Science Advances, researchers from Canada, and the United States, working with the cultural authorities of Mexico, show that the discoveries represent the oldest known ochre mines in the Americas.

These unique finds explain for the first time the evidence of ancient human activity and remains in the submerged caves. Previously reported finds include Naia, the name given to the most complete skeleton of these among the earliest Americans, which clarifies how the Western Hemisphere was first populated.

While Naia added to the understanding of the ancestry, growth and development of these early Americans, little was known about why she and her contemporaries took the risk to enter the maze of caves found below the surface of the Yucatan peninsula. With exploration of these new sites just getting started, the potential for still more mysteries to be unlocked is enormous.

HOW THE DISCOVERIES WERE MADE

WHAT’S BEEN DISCOVERED SO FAR

WHAT’S BEEN LEARNED SO FAR

“What is remarkable is not only the preservation of the mining activity, but also the age and duration of it. We rarely, if ever, get to observe such clear evidence of ochre pigment mining of Paleoindian age in North America, so to get to explore and interpret this is an incredible opportunity for us. Our study reinforces the notion that ochre has long been an important material throughout human history.”

“The same kind of teamwork that early Paleoindians demonstrated to kill megafauna as big as mammoths is evident in the mines of Quintana Roo. Miners had to first make carrying bags or baskets for the ochre they planned to extract. Then they had to provision the mine with enough torchwood so their illuminating fires would last as long as they intended to work. We can envision some workers keeping the fires lit while others toiled in teams to break and lift boulders to expose the pigment. Imagine flickering light amidst deep shadows illuminating the red-stained hands of the miners as they pounded the floor with stalagmite hammers and lighting the path of those who lugged bags of ochre hundreds of yards through the low tunnels and shimmied up the narrow tube to daylight on the forest floor.”

EDUARD REINHARDT, EXPERT DIVER AND PROFESSOR AT THE SCHOOL OF EARTH, ENVIRONMENT & SOCIETY

“Most evidence of ancient mining on the surface has been altered through natural and human processes, obscuring the record. These underwater caves are a time capsule. With all the tools left as they were 10,000 – 12,000 years ago, it represents a unique learning opportunity. It took advanced expertise to work in the caves recovering ochre, so we know it was very valuable for the earliest peoples of the Americas.”

“It is not what we have found so far, but what we have yet to discover that gets us out of bed every morning. We have no doubt that there is so much more out there just waiting to be found and understood. And we hope that these amazing discoveries of ancient human activities preserved in these waters from so long ago will draw attention to the threats these waters face from human activity now. Ultimately the real treasure within the caves is what flows through them that allows people and wildlife to thrive.”

DOMINIQUE RISSOLO, ARCHEOLOGIST AND RESEARCH SCIENTIST WITH THE QUALCOMM INSTITUTE AT THE UNIVERSITY OF CALIFORNIA, SAN DIEGO SAYS:

“Ongoing research in the submerged caves of Quintana Roo is contributing to a more holistic understanding of what life was like for the region’s earliest inhabitants. In addition to evidence of mining, the caves contain abundant, diverse, and well-preserved plant and animal remains from the last ice age.”

“The discoveries in these caves include the earliest examples of human activity ever found in Mexico. The pioneering work of explorers and scientists working together with the national authorities will continue to reveal the rich underwater archeological history of our country. And nowhere is the archeological potential greater than in the Yucatan peninsula.”

For U.S. media inquires (English only):

For Canadian media inquires (English only):

For additional multimedia materials and media inquiries from all other countries (English, Spanish and French):