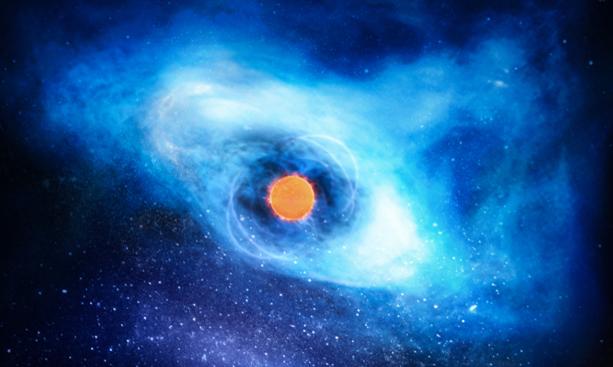 Astrophysicists have discovered that the pulsar wind nebula (PWN) surrounding the famous pulsar B0540-69 brightened gradually after the pulsar experienced a sudden spin-down rate transition (SRT). This discovery, made by a group of astrophysicists led by GE Mingyu and LU Fangjun at the Institute of High Energy Physics of the Chinese Academy of Sciences, provides important clues to the spin-down mechanism and the magnetic field structure of the pulsar, as well as the physical properties of the PWN. The results were published in

Pulsars are highly magnetized neutron stars born from supernova explosions of massive stars. They typically have radii about 10 km and surface magnetic field strengths around 1 trillion Gauss. According to classic pulsar theory, an isolated pulsar loses energy through magnetic dipole radiation and thus slows down. However, more and more theorists believe that the main way an isolated pulsar loses its rotational energy is through a relativistic wind consisting of electrons, positrons and possibly magnetic field. If the wind is strong enough, it will eventually form a detectable PWN through interaction with the surrounding materials. The famous Crab nebula is such a PWN, with a size of several light-years, i.e., about a hundred thousand times the distance from Earth to the Sun.

PSR B0540-69 is located in the Large Magellanic Cloud galaxy, a satellite galaxy about 160,000 light-years from our Milky Way. In December 2011, the spin-down rate of this pulsar suddenly increased by 36% and has remained almost constant since then, which means the energy release rate of the pulsar has also increased by 36%. Unlike other pulsars with similar spin-down rate transitions, which are accompanied by pulse profile and/or flux changes and are attributed to changes in the magnetospheres, no variation in either the pulse profile or flux has been detected from PSR B0540-69, making the cause of its SRT a mystery.

GE stated, “Using data obtained by a few X-ray astronomical satellites, we find that the X-ray PWN around PSR B0540-69 brightened gradually up to 32±8% over the prior flux during the period of about 400 days since the SRT (Fig. 2). We show that the SRT most likely resulted from a sudden enhancement of the magnetic field in the pulsar magnetic pole region, which does not significantly affect the pulsed X-ray emission but increases pulsar wind power and hence PWN X-ray emission.” This is the first time that PWN brightening has been observationally connected with the pulsar spin-down rate transition, implying that the pulsar wind is the main factor slowing down the pulsar spin. “The 400-day time scale of the flux increase corresponds to a magnetic field strength of about 0.8 milli-Gauss in the PWN. This is also the first direct measurement of the magnetic field and is consistent with the value estimated before under some assumptions,” LU added.

The other investigators on this project include YAN Linli of Anhui Jianzhu University, WENG Shanshan of Nanjing Normal University, ZHANG Shuangnan ,WANG Lingjun and ZHANG Wei of the Institute of High Energy Physics, Q. Daniel Wang of the University of Massachusetts, and LI Zijian from the Hebei University of Engineering.

This part of information is sourced from https://www.eurekalert.org/pub_releases/2019-08/caos-alb082219.php