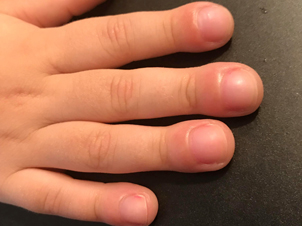 For thousands of children living with the debilitating disease systemic juvenile idiopathic arthritis (sJIA), a class of medications known as “biologics” have produced dramatic, life-changing improvements. Now, however, experts at Cincinnati Children’s and elsewhere are raising concerns about a rare and potentially fatal lung complication occurring among some children taking these drugs.

In a study featured as the cover article of the November issue of Arthritis & Rheumatology, experts at Cincinnati Children’s document 18 examples of patients suffering what they call “systemic JIA-associated lung disease” or (SJIA-LD). The study also reports that early detection and treatment may sharply reduce the risk of dying from this condition.

“The doctors taking care of these patients need to be more aware of this complication and have a very high index of suspicion for it. Similarly, parents and families of these patients need to be talking to their doctors about this lung disease and making sure that their doctors are screening for it,” says Grant Schulert, MD, PhD, a rheumatology expert at Cincinnati Children’s and lead author of the new study.

Once known as juvenile arthritis, the most common forms of JIA affect as many as one in 1,000 children in the United States. The condition causes painful inflammation in one or more joints, usually starting with a swollen knee, and often spreading to hips, ankles, toes and shoulders.

Systemic JIA is much less common, occurring in about 10 to 15% of all children with JIA. Typically, this disease strikes before age 5, and most commonly around age 2. Unlike other forms of arthritis, sJIA starts by striking the entire body at once. Children typically develop high fevers that surge daily and can last for weeks. Many also develop a rash that comes and goes.

The emerging information about children with sJIA facing lung complications is strikingly different from previous medical literature, says senior author Grom. “The clinical pattern that we are seeing in these patients suggests that we may be dealing with a new disease.”

For many years, doctors treated the inflammation triggered by sJIA with heavy doses of steroids and other medications. But around 2005, children with sJIA began benfetting from a class of drugs called biologics.

Unlike the chemical formulations that lead to most drugs, biologics are “living” medications. They include lab-modified proteins, antibodies and other organic substances designed to enhance the body’s own immune response to disease.

In recent years, at least one of three biologics made by three different companies have been used by nearly every child diagnosed with sJIA. Two block an inflammatory cytokine called IL-1, another blocks a related IL-6 inflammatory pathway.

“I do not think we are ready to say these drugs should not be used. For 95% of those with sJIA they don’t develop lung disease and these drugs have really been life changers,” Schulert says. “This used to be the most debilitating form of arthritis. Children would have growth failure, significant complications from chronic steroid use, and many were getting joint replacements in their teenage years.

“Since the introduction of these medications it has really been a revolution,” Schulert says. “We run an arthritis camp every summer, which used to be dominated by kids in wheelchairs. Now it’s horseback riding, canoeing and summer camp stuff.  That’s primarily because of this revolution in treatment.”

However, rare complications can be hard to detect and understand the cause, especially when the condition itself is rare.

Early symptoms of the lung disease include chronic cough, loss of energy, and other vague symptoms that can be signs of many routine ailments. Doctors have seen one unusual symptom: For unclear reasons, some of the children with the lung problem develop an odd swelling in the fingertips, called “clubbing,” Schulert says.

The 18 cases reported by Cincinnati Children’s adds to a list of more than 100 similar cases gathered since 2012. The first cases were registered by the Childhood Arthritis and Rheumatology Alliance (CARRA), with more added from several countries by scientists at Stanford University and other centers.  Many of these cases have been reported as adverse events to the U.S. Food and Drug Administration.

Cincinnati Children’s—one of the world’s top research and treatment centers for JIA—estimates that this lung condition is occurring in about 6% of children with sJIA.

Of the 18 cases described in the new study, none of the patients has died. However, since submitting information for that paper, Cincinnati Children’s has seen a total of 27 patients with lung complications, and one of those children died. Other groups of patients identified by Stanford scientists and others have had higher death rates.

“We made the decision to publish our own observations because we have some other information that we’ve been working on in terms of identifying a set of common factors among these children and how we’ve been able to manage this complication in most cases.”

None of these children had lung problems when they were first diagnosed with sJIA. Instead, lung problems emerged several weeks to several months after starting biologic treatments, Schulert says.

The children experiencing the lung problems tended to be less than 2 years old when their sJIA was diagnosed, their use of biologics often failed to push their disease into remission and eight of the 18 experienced adverse reactions to the medications, including allergies and liver complications. Importantly, 80% of the children with lung disease also had a past brush with macrophage activation syndrome (MAS), another dangerous complication of sJIA.

“We do think there’s a connection between the lung disease and MAS,” Schulert says. “Exactly how the biologics may have affected all of this remains to be studied.”

Rashmi Sinha, PhD, is a scientist and entrepreneur who founded the internet company SlideShare in collaboration with her entrepreneur husband Jon Boutelle. Their family moved from San Francisco to Cincinnati in 2015 after one of their fraternal twin boys developed sJIA and then developed the lung disease complication.

“Our sons were born in 2012. When they were a year old they both came down with a viral infection, but Vikram never got better. He started having these daily fevers. He started getting rashes,” Sinha says. “We took him to the doctor, they did some blood tests and they sent us to the ER. After a few days he was diagnosed with systemic JIA.”

“He was put on the biologic medications, but he didn’t do really well on those from the beginning. A year later, we noticed he was getting worse and he was diagnosed with this lung complication,” she says. “At the time, the few cases that had been identified had a significant mortality rate. It was at that point that I decided I wasn’t going to just sit back and let this happen.”

The couple launched the Systemic JIA Foundation in 2017. Now, they have connected with dozens of families that have children with sJIA. The foundation is working closely with Schulert and Alexei Grom, MD, Director of Rheumatology Research at Cincinnati Children’s, along with other medical centers, to help gather data on this alarming complication.

“Cincinnati has long been a reference center for JIA, but they’ve really started becoming the center to go to for a second opinion,” Sinha says. “What’s really good about that is that instead of every doctor seeing one or two patients, they are seeing a lot of cases and can learn from the patterns, which is very helpful for advancing the science and for getting kids better.”

Schulert and colleagues continue to study the mechanisms that may be driving this complication. They hope to identify a more refined set of indications that doctors and families can watch for so that lung treatments can begin as early as possible.

While not perfect, Cincinnati Children’s has been successful at managing the lung complication in most cases. But more information is needed.

“My child is doing better,” Sinha says. “He’s stable, but not great. And I know of other families that are really struggling. I totally agree that this is the time to raise awareness about this lung disease. A lot of families and doctors do not know how serious this can be.”

Click here for more information about the Systemic JIA Foundation