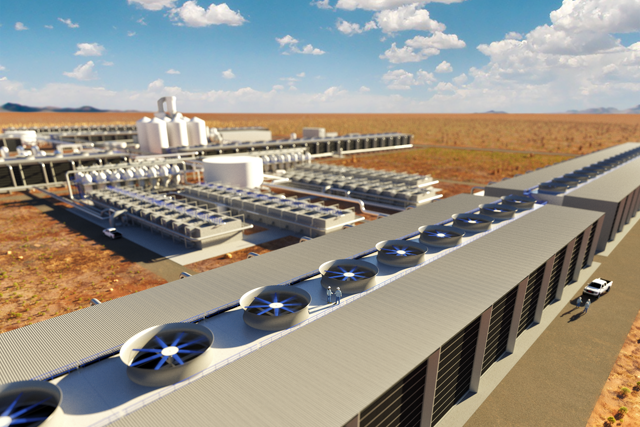 There is a growing consensus among scientists as well as national and local governments representing hundreds of millions of people, that humanity faces a climate crisis that demands a crisis response. New research from the University of California San Diego explores one possible mode of response: a massively funded program to deploy direct air capture (DAC) systems that remove CO2 directly from the ambient air and sequester it safely underground.

The findings reveal such a program could reverse the rise in global temperature well before 2100, but only with immediate and sustained investments from governments and firms to scale up the new technology.

Despite the enormous undertaking explored in the study, the research also reveals the need for governments, at the same time, to adopt policies that would achieve deep cuts in CO2 emissions.  The scale of the effort needed just to achieve the Paris Agreement goals of holding average global temperature rise below 2 degrees Celsius is massive.

The study, published in Nature Communications, assesses how crisis-level government funding on direct air capture—on par with government spending on wars or pandemics—would lead to deployment of a fleet of DAC plants that would collectively remove CO2 from the atmosphere.

“DAC is substantially more expensive than many conventional mitigation measures, but costs could fall as firms gain experience with the technology,” said first-author Ryan Hanna, assistant research scientist at UC San Diego. “If that happens, politicians could turn to the technology in response to public pressure if conventional mitigation proves politically or economically difficult.”

“Current pledges to cut global emissions put us on track for about 3 degrees C of warming,” Victor said. “This reality calls for research and action around the politics of emergency response. In times of crisis, such as war or pandemics, many barriers to policy expenditure and implementation are eclipsed by the need to mobilize aggressively.”

The study calculates the funding, net CO2 removal, and climate impacts of a large and sustained program to deploy direct air capture technology.

Even with such a massive program, the globe would see temperature rise of 2.4–2.5ºC in the year 2100 without further cuts in global emissions below current trajectories.

According to the authors, DAC has attributes that could prove attractive to policymakers if political pressures continue to mount to act on climate change, yet cutting emissions remains insurmountable.

“Policymakers might see value in the installation of a fleet of CO2 scrubbers: deployments would be highly controllable by the governments and firms that invest in them, their carbon removals are verifiable, and they do not threaten the economic competitiveness of existing industries,” said Hanna.

From the Civil War to Operation Warp Speed, the authors estimate the financial resources that might be available for emergency deployment of direct air capture—in excess of one trillion dollars per year—based on previous spending the U.S. has made in times of crisis.

The authors then built a bottom-up deployment model that constructs, operates and retires successive vintages of DAC scrubbers, given available funds and the rates at which direct air capture technologies might improve with time. They link the technological and economic modeling to climate models that calculate the effects of these deployments on atmospheric CO2 concentration level and global mean surface temperature.

With massive financial resources committed to DAC, the study finds that the ability of the DAC industry to scale up is the main factor limiting CO2 removal from the atmosphere. The authors point to the ongoing pandemic as an analog: even though the FDA has authorized use of coronavirus vaccines, there is still a huge logistical challenge to scaling up production, transporting, and distributing the new therapies quickly and efficiently to vast segments of the public.

“Crisis deployment of direct air capture, even at the extreme of what is technically feasible, is not a substitute for conventional mitigation,” the authors write.

Additionally, they note that such a large program would grow a new economic sector, producing a substantial number of new jobs.

The authors conclude it is time to extend research on direct air capture systems to real-world conditions and constraints that accompany deployment—especially in the context of acute political pressures that will arise as climate change becomes viewed as a crisis.