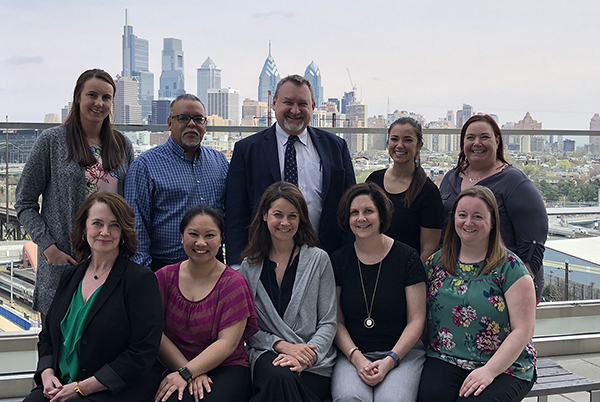 PHILADELPHIA—Penn Medicine’s OncoLink — the first cancer information website on the internet — has hit a new milestone: 100,000 cancer survivors from around the world have now received a personalized survivorship care plan through the website to guide them through life after cancer.

While advances in prevention and cancer treatment have led to many more cancer survivors today than ever before, treatments are not without consequences, as these patients can face long-term effects from chemotherapy, radiation, and other therapies, including a greater risk of heart disease or cognitive impairment.

Recognizing the need to help survivors get the information they need, in 2007, the staff of OncoLink created OncoLife™, the program that creates customized survivorship care plans. The goal was to educate survivors about the health risks from treatment, as well as help them learn about prevention and monitoring for late effects and start a conversation with their healthcare providers about late effects.

“After 14 years, what started out as a little engine has grown substantially, both in the scope of information provided and sheer number of plans generated,” said Carolyn Vachani, MSN, RN, managing editor of OncoLink, which started in 1994. “We’re thrilled to know that cancer survivors and providers have used this unique tool to create 100,000 survivorship care plans to help patients better navigate and manage their life after cancer.”

The plans — available to anyone with access to internet via their phones, tablets, or desktops for free — have been downloaded by survivors and healthcare providers around the globe, mostly in the United States, but also in Canada, Australia, the United Kingdom, and South Africa, with 132 countries in all represented. The 100,000th plan was generated in Beijing, China.

Since its inception, the OncoLife team has expanded on its original content focused on physical effects by adding psychological and practical support, tobacco cessation information, cancer follow up and screening information, and tips for healthy living. OncoLife remains the only U.S.-based program to offer survivorship care plans in Spanish.

OncoLife also acts as a valuable research tool. Researchers from Penn Medicine and other institutions analyze anonymous data generated from the site to better understand use patterns and patient-reported outcomes and discover areas for improvement. So far, more than 75 research studies and presentations from scientific meetings have been published. One study in 2013 found that the plans empower patients to become more active participants in their own health care. More recent data showed that patients cared for by both a primary care physician and an oncologist were 20 percent more likely to receive a plan.

“The survivorship care plan has allowed us to reach a lot of patients and hopefully help guide them during their survivorship,” said Christine Hill-Kayser, MD, an associate professor of Radiation Oncology in the Perelman School of Medicine at the University of Pennsylvania and editor-in-chief of OncoLink. “It has also allowed us to learn a lot about them and their needs —and thus to continually improve the care plan and contribute to the body of survivorship literature.”

OncoLife lives within the OncoLink website, which remains one of the largest cancer sites in the world, with a mission to support patients, caregivers, and practitioners with up-to-date information on all aspects of cancer diagnosis, treatment, and recovery.

Despite the growing number of survivors and attention given to survivorship plans in recent time, many cancer centers struggle to provide these documents to their patients due to the resources needed to create this information from scratch. To help expand use, the OncoLink team continues to work to improve the OncoLife plans, raise awareness about their benefits and utility, and remove barriers so more patients can access them.

Their latest effort is the Smart Adult Living After Childhood Cancer Care Plan, or Smart ALACC, for childhood cancer survivors. This survivorship plan is tailored for adults who battled cancer as a child— which represents about one in 700 people. OncoLife is also now being integrated into electronic medical records, EHR, in many Penn Medicine facilities, making the creation and distribution of care plans easier for practitioners.

“Even though 100,000 is a huge number, there are millions of cancer patients every year who have been diagnosed or finished treatment and would benefit from this,” said James Metz, MD, chair of the department of Radiation Oncology at Penn and executive director of OncoLink. “We’re really excited about being able to generate more plans for more patients in the future. This is just the beginning.”

To learn more about how it all started, visit the OncoLink blog.

Penn Medicine is one of the world’s leading academic medical centers, dedicated to the related missions of medical education, biomedical research, and excellence in patient care. Penn Medicine consists of the Raymond and Ruth Perelman School of Medicine at the University of Pennsylvania (founded in 1765 as the nation’s first medical school) and the University of Pennsylvania Health System, which together form a $8.6 billion enterprise.

The Perelman School of Medicine has been ranked among the top medical schools in the United States for more than 20 years, according to U.S. News & World Report’s survey of research-oriented medical schools. The School is consistently among the nation’s top recipients of funding from the National Institutes of Health, with $494 million awarded in the 2019 fiscal year.

Penn Medicine is powered by a talented and dedicated workforce of more than 43,900 people. The organization also has alliances with top community health systems across both Southeastern Pennsylvania and Southern New Jersey, creating more options for patients no matter where they live.

Penn Medicine is committed to improving lives and health through a variety of community-based programs and activities. In fiscal year 2019, Penn Medicine provided more than $583 million to benefit our community.