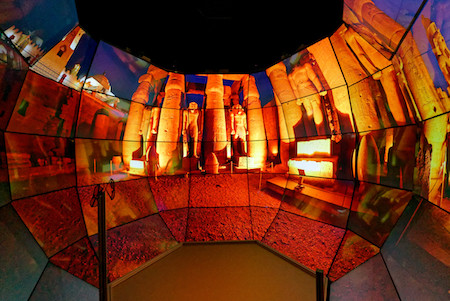 It can also take you, virtually, into worlds as varied as a temple in Egypt, an ancient copper smelting site in Jordan or an underwater cave system on the Yucatan Peninsula. Or even into the abdomen of Crohn’s disease patients.

Front and center in the room is a 360-degree sphere-like scaffolding covered in screens called the SunCAVE—the world’s highest resolution walk-in virtual reality (VR) environment. It’s one that doctors, archaeologists, musicians, computer scientists and students are using to create new means for discovery, healing and understanding.

Two years ago this summer, the Qualcomm Institute’s CAVE (or Cave Automated Virtual Environment) morphed from the StarCAVE, as it was known, into the SunCAVE. Its physical shape changed, as did the technology running it behind the scenes.

Tapping into the power of cluster computing, the SunCAVE today offers much more than just visuals; it’s become a powerful tool for machine learning and data analysis as well.  Think of it as your TV being equipped with a supercomputer, becoming a visualization system that can also compute what it’s seeing. Only much bigger, brighter and faster— and connected to a host of other computers worldwide at speeds more than 1,000 times faster than your laptop.

“It’s a beautiful object, a giant gem. There’s nothing like it in terms of intensity and resolution,” said Tom DeFanti, a research scientist at the Qualcomm Institute, the UC San Diego Division of the California Institute for Telecommunications and Information Technology (Calit2).

“The fact that we can use 35 PCs and 70 game-class graphics cards (GPUs) and memory together makes it a computer cluster that also happens to immerse you in realistic 3D pictures, algorithmic visualizations, and even MRI-scans of human brains and other organs,” he said.

First unveiled in 2007, the StarCAVE was designed by a team of scientists and Internet and virtual reality pioneers: DeFanti, who coined the term CAVE while a professor at the University of Illinois at Chicago for its VR room, Greg Dawe, a Qualcomm Institute principal design engineer, Ramesh Rao, the Qualcomm Institute director, Larry Smarr, the director of Calit2, and Qualcomm Institute research scientist Jurgen Schulze, who developed the software to run it.

The Qualcomm Institute’s current CAVE, the SunCAVE, was built ground up, panel by panel, by Dawe and UC San Diego Visual Arts alumnus Joel Polizzi. Polizzi, a visualization engineering technician at the Qualcomm Institute, is now helping the SunCAVE enter the next generation with fellow Visual Arts alumnus Isaac Nealey, a visualization software developer at the institute. They have integrated additional applications and tools such as ParaView and Unreal Engine to create more dynamic scenes and realistic, 3D experiences.

By offering its cluster computing capability to a variety of researchers, the SunCAVE is uniting a community of users who can tap into this Kubernetes-orchestrated system to use and share resources. (Kubernetes is Google’s popular open-source software for making large numbers of diverse computer platforms work together. The Qualcomm Institute was an early adopter.)

The SunCAVE was built with funds from National Science Foundation.

CAVE is a trademark of the Board of Trustees of the University of Illinois.

Larry Smarr, the Calit2 director, talks here about his Crohn’s disease and the role of VR, including the SunCAVE, played in his diagnosis and treatment.