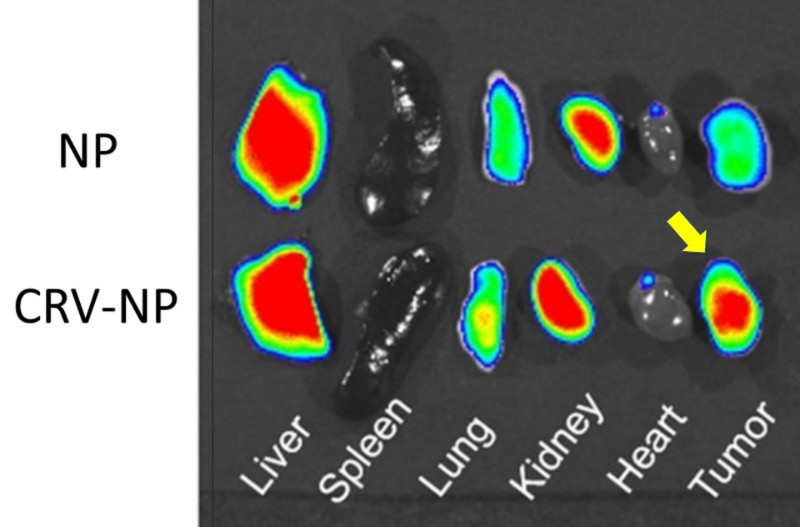 Macrophages are white blood cells that accumulate in tumors, where they aid cancer progression. Now scientists have identified a surface protein found only on the macrophages residing in tumors, exposing a target for precise tumor treatments.

Despite the role of TAMs in aiding tumor growth, because of their high concentration in tumors, researchers have sought ways to exploit these cells for targeting tumor therapies. A major barrier to achieve this goal, though, is how to distinguish TAMs from macrophages in normal organs. Now, NIBIB-funded Hongbo Pang, Ph.D., Assistant Professor, College of Pharmacy at the University of Minnesota, and his collaborators have identified a protein found only on the surface of TAMs. The work, which aims to guide specific targeting of tumor therapies, is reported in the May issue of the Journal of Controlled Release 1.

“Delivering drugs to tumors, while avoiding exposure to healthy tissues, is a central goal in cancer treatment’” says David Rampulla, Ph.D., director of the NIBIB program in Delivery Systems and Devices for Drugs and Biologics. “Identifying a cell surface protein specific to only macrophages in tumors and not healthy tissues is an exciting finding with the real possibility of improving the specificity and potency of therapies for a wide range of cancers.”

Pang and his colleagues previously used a technique called phage display to identify a marker found only on the surface of TAMs. Phage display involves putting thousands of random pieces of DNA into phages, which are viruses that infect and grow in bacteria. The piece of DNA in each phage makes a peptide, a small piece of a protein, that is displayed on the surface of the phage. The result is an extensive library of random peptides on the surface of the phages. The library of phages was then exposed to a  macrophage cell line, which led to the identification of a macrophage-binding peptide dubbed CRV.

In this study, Dr. Pang and his team injected CRV into mice carrying a variety of tumor types. CRV successfully homed and bound to TAMs in the tumor tissue while avoiding surrounding healthy tissues. To bind the TAMs, CRV had to move from the tumor’s blood vessels into the tumor tissue itself — a process called extravasation. The rapid extravasation of CRV to reach TAMs was an extremely encouraging sign that this peptide has the potential to carry therapeutic cargo into solid tumors.

The team validated that CRV binds to a receptor on the surface of TAMs called RXRB. Further analysis confirmed that RXRB is not found on the surface of macrophages in normal organs and is therefore a distinct marker found only on TAMs.

To test the idea of using the system to deliver anti-tumor drugs, the team attached CRV to a nanoparticle, which could potentially carry chemotherapy drugs to TAMs. The CRV-nanoparticle was injected into mice carrying mouse mammary tumors. CRV enhanced the delivery of the nanoparticle into solid tumors.

“The results demonstrate that we have defined a potentially novel target on TAMs for improving TAM-based cancer therapy,” says Pang. ”This opens the possibility for a number of therapies that target TAMs, ranging from highly specific delivery of chemotherapy to tumors, to the development of TAM-binding molecules that could potentially reverse TAMs from being tumor promoters to potent anti-tumor weapons.”

This work was supported by grants from the National Cancer Institute (R01CA214550 and R01CA188883) and the National Institutes of Biomedical Imaging and Bioengineering (R21EB022652). Dr. Pang is also affiliated with Sanford Burnham Prebys Medical Discovery Institute, La Jolla, CA.