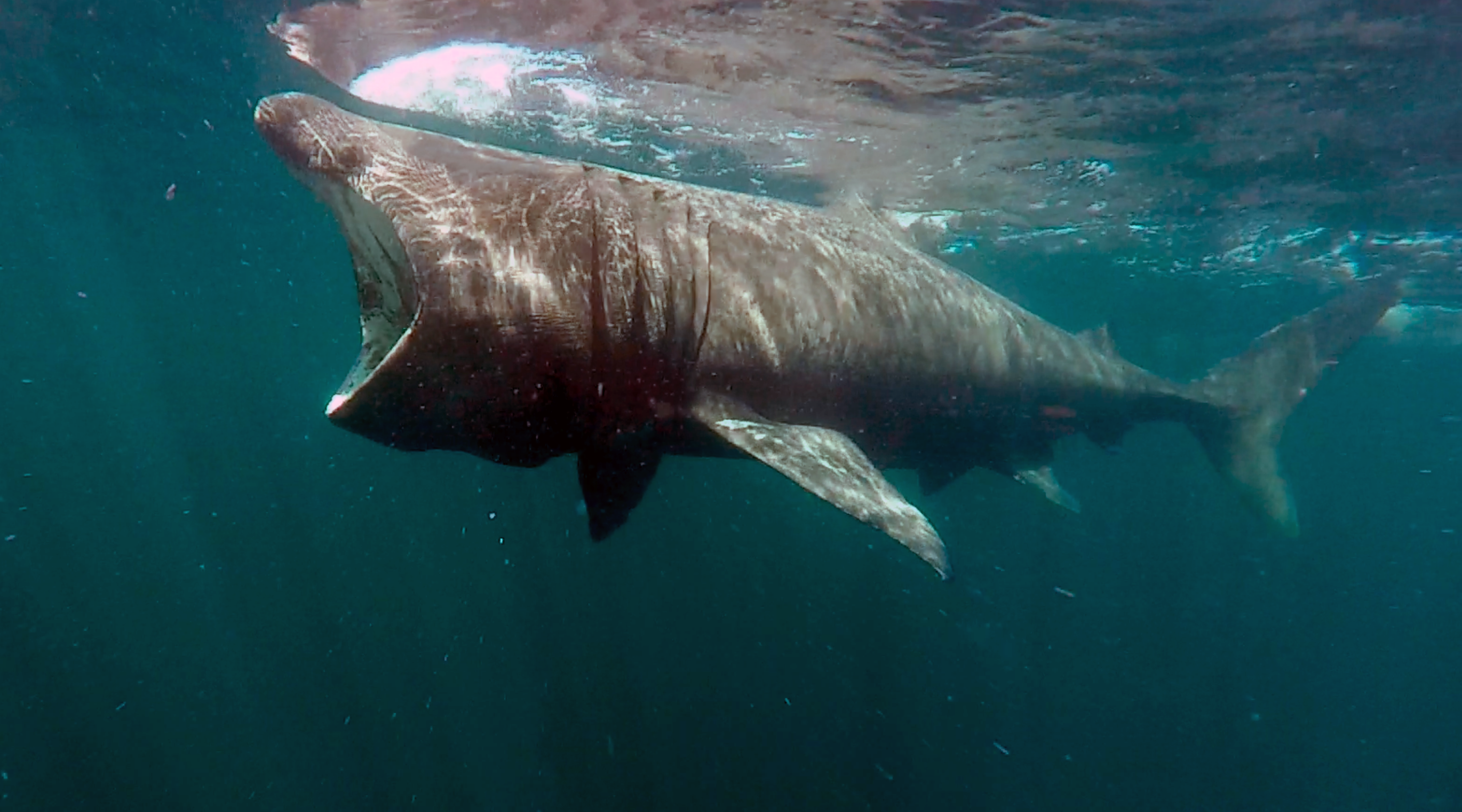 An autonomous underwater vehicle (AUV) known as the REMUS SharkCam has been used in the UK for the first time to observe the behavior of basking sharks in the Inner Hebrides, off the west coast of Scotland.

The groundbreaking technology, designed and built by the Oceanographic Systems Laboratory at Woods Hole Oceanographic Institution (WHOI), is set to reveal the secret lives of the world’s second largest fish—a species that little is known about, despite being prevalent in the region’s waters.

The research team, which included colleagues from the University of Exeter, World Wildlife Fund (WWF), Sky Ocean Rescue, Scottish Natural Heritage (SNH), hope the stunning images captured by the AUV will strengthen the case for creating the world’s first protected area for basking sharks in this part of the sea.

The team used SharkCam to track sharks once they were tagged and disappeared beneath the water’s surface. The robot collects wide-angle, high definition video of their behaviour from a distance, as well as high quality oceanographic data, such as ocean temperature, salinity, biological productivity and bathymetry, which shows how far the sharks are off the bottom of the seafloor.

Initial footage from the innovative SharkCam deployed off the coast of Coll and Tiree last month shows the sharks moving through the water column, potentially searching for food, feeding near the surface and swimming close to the seafloor.

It is hoped that further analysis of the many hours of video footage from the AUV, as well as visuals from towed camera tags attached to the sharks and the deployment of advanced sonar imaging, will uncover even more about the underwater behavior, social interactions, group behavior and courtship of the elusive species.

“Every time we deploy REMUS SharkCam, we learn something new about the species we are studying,” said WHOI Research Engineer Amy Kukulya and SharkCam Principal Investigator. “We’re able to remove the ocean’s opaque layer and dive into places never before possible with this groundbreaking technology, answering questions about key species and revealing new ones.”

Fieldwork for the project took place in July in the proposed Sea of the Hebrides Marine Protected Area (MPA) – one of four possible MPAs currently under consultation by the Scottish Government. MPAs are specially designated and managed to protect marine ecosystems, habitats and species, which can help restore the area for people and wildlife.

The area is one of only a few worldwide where large numbers of basking sharks are found feeding in the surface waters each year. It is suspected that basking sharks may even breed in Scotland—an event that has never before been captured on film.

“Our seas and coasts are home to some incredible wildlife,” said Dr. Jenny Oates, WWF SEAS Programme Manager. “As our oceans come under increasing pressure, innovative technology like the REMUS SharkCam can reveal our underwater world like never before and help to show why it must be protected. It is essential that we safeguard our seas, not just to enable magnificent species like basking sharks to thrive, but because all life on earth depends on our oceans.”

Footage gathered by the REMUS SharkCam technology will help support and promote basking shark conservation work by demonstrating how important this area is for the life cycle of the species, adding weight to the case for the MPA designation and providing a better understanding of measures which might help protect this iconic species and its habitat.

The REMUS SharkCam technology—owned and operated by WHOI—was originally developed to track great white sharks, but has been adapted to also be able to track sea turtles, smaller sharks and now basking sharks. The ‘smart’ AUV is programmed to follow a specially designed tag placed on a shark and can forward predict where the animal will go and follow along at a safe distance. The special acoustic bio-logger tag trails slightly behind the attachment point at the base of the main dorsal fin and can remain on sharks for the duration of a mission. The SharkCam tags are fitted with a three-tiered release technology and communication system, which allows researchers to find and collect the tags after they have detached from the sharks recovering more data about the animals behavior.

Dr. Suzanne Henderson, Marine Policy and Advice Officer at SNH, who has worked on the basking shark tagging and research project run by SNH and the University of Exeter since 2012, said: “These giant fish are spectacular and watching them feed gracefully at the sea surface is such a special and memorable experience.

“This year’s collaboration has allowed us to use a combination of camera technologies and given us a glimpse of basking sharks’ underwater behaviour – a real first and very exciting. The footage has already made us reassess their behaviour, with the sharks appearing to spend much more time swimming just above the seabed than we previously thought.

“It really brings home why it’s so important that the species and its habitat are protected by designating the Sea of the Hebrides as a Marine Protected Area.”

Dr. Matthew Witt, of the University of Exeter, said: “This year saw the culmination of a decade of work at Exeter to support the conservation of this species. In collaboration with SNH, we have deployed state of the art equipment over several years to learn of the behaviours of these elusive animals.

“This year, our collaborative efforts expand with exciting new partners, to bring advanced video techniques to help reveal even greater detail on the underwater lives of these animals. Our efforts and resulting information highlight why the proposed MPA is important for securing a more positive conservation future for this iconic Scottish species.”