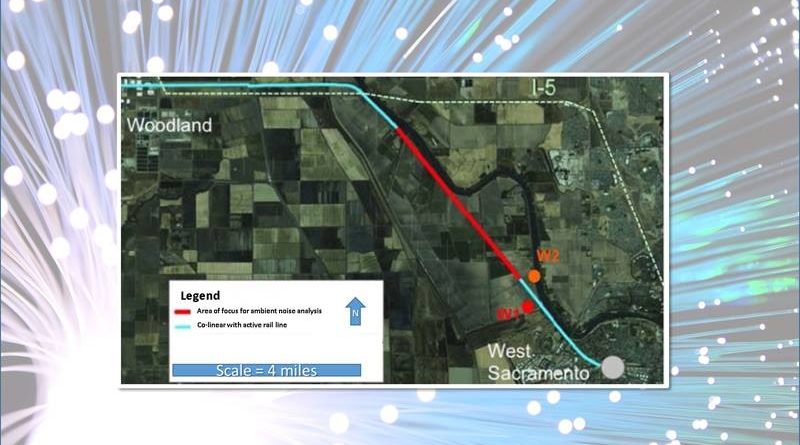 To learn how the Earth moves in the moments before, during, and after an earthquake, scientists use data from expensive underground sensors. Unused fiber-optic cables, known as dark fiber, could change the equation. Scientists used distributed acoustic sensing along a 20-mile segment of the Energy Sciences Network (ESnet) Dark Fiber Testbed to record seven months of passive seismic data. Their work showed how unused fiber-optic cable could serve as a highly sensitive earthquake sensor. This is one of the first case studies to employ a large regional network as a seismic sensor.

In traditional seismology, researchers rely on sensors that cost tens of thousands of dollars to make and install underground. And because of the expense and labor involved, only a few seismic sensors have been installed throughout remote areas of California, making it hard to understand the impacts of future earthquakes as well as small earthquakes occurring on unmapped faults. This new approach could potentially augment the performance of earthquake early warning systems currently being developed in the western United States.

During the dot-com boom, telecom companies installed vast networks of underground fiber-optic cable to meet the demands of a growing industry. As data transmission technology improved, fewer cables were needed. Now, about 600,000 miles of that fiber is unused worldwide. It’s known as dark fiber. Scientists have been investigating a potential new use for this dark fiber: seismic sensing. Conventional seismic networks often employ only a few dozen sensors to cover a relatively large area. The team used distributed acoustic sensing, a technology that measures seismic wavefields by shooting short laser pulses across the length of the fiber, along a 20-mile stretch of ESnet’s Dark Fiber Testbed. ESnet, the Department of Energy’s high-performance network for extreme-scale data, maintains the testbed for network research; using the testbed for seismology is a novel idea that emerged from conversations at Berkeley Lab. The team used dark fiber running from West Sacramento to Woodland, California. Because the ESnet Testbed has regional coverage, the researchers were able to monitor seismic activity and environmental noise with finer detail than previous studies. The coverage of the testbed provided subsurface images at a higher resolution and larger scale than would have been possible with a traditional sensor network. In addition to being able to distinguish between a car and moving train versus an earthquake and to detect both local and distant earthquakes, the technology could also be used to characterize soil quality, provide information on aquifers, and be integrated into geotechnical studies.

The research was funded by Lawrence Berkeley National Laboratory’s Laboratory Directed Research and Development program and the National Science Foundation Graduate Research Fellowship (N.J.L.), with earlier research supported by the Strategic Environmental Research and Defense Program, Department of Defense. This research used resources of the ESnet Dark Fiber Testbed, which is supported by the Department of Energy, Office of Science.