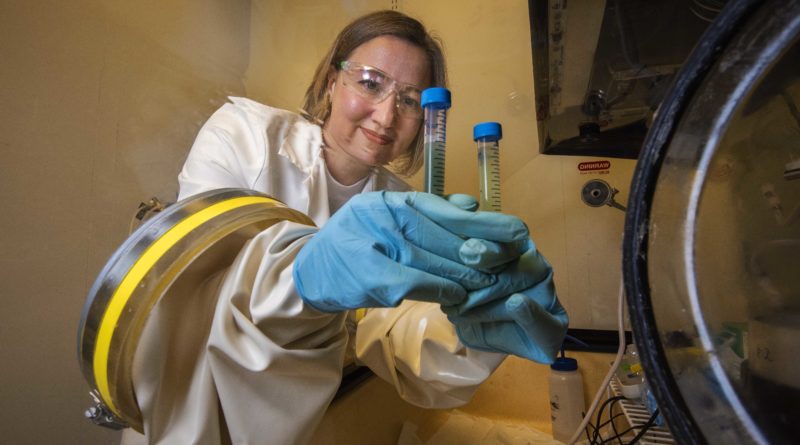 ALBUQUERQUE, N.M. — Sandia National Laboratories researchers have discovered the mechanism to “switch on” iron residing in clay mineral structures, leading to the understanding of how to make iron reactive under oxygen-free conditions.

This research will help scientists understand and predict how contaminants, such as arsenic, selenium and chromium, move through the environment and enter waterways. These chemical principles can be applied to develop natural soil barriers to remove these contaminants from water and make reactive membranes, which can transform contaminants during the water filtration process.

The work is featured on the cover of a recent issue of Environmental Science: Nano in a paper titled, “‘Switching on’ iron in clay minerals,” by Sandia researchers Anastasia Ilgen, Kevin Leung and Rachel Washington and Ravi Kukkadapu from Pacific Northwest National Laboratory. The work was funded by the Department of Energy’s Basic Energy Sciences program.

Ilgen explains that iron in soils can exist in two oxidation states: reduced and oxidized. This is important, because iron constantly cycles between these forms in response to slight changes in soil conditions.

“Clay minerals are exceedingly common in soils and they often contain iron in their structures,” she said. “The surfaces of clay minerals, which only contain oxidized iron, are not reactive. They adsorb arsenic, but don’t transform it chemically. However, these same surfaces become reactive as soon as a minor amount of reduced iron is introduced into the clay mineral’s structure.”

Until now, it was unknown how and why clay minerals with trace amounts of reduced iron react when no oxygen is present.

“We have discovered the mechanism by which oxidized iron in clay mineral structures reacts under oxygen-free conditions, and why trace amounts of reduced iron are necessary for the reactions to take place,” Ilgen said.

Using experimental tools, the team pinpointed the exact chemical sites in clay minerals that reacted with arsenic. The team showed that iron atoms located at the edges of clay minerals were reactive, and for the reactions to take place these sites have to contain both reduced and oxidized iron.

The team used computational methods to calculate the energy required for oxidizing arsenic, which is adsorbed onto a site containing exclusively oxidized iron versus a site with both oxidized and reduced iron. These calculations showed that thermodynamically adding one reduced iron next to an oxidized iron does not make the oxidation of arsenic any more favorable.

Then, the question becomes why are the sites reactive in the environment? Using spectroscopic analysis, the team demonstrated that for a contaminant, such as arsenic, to oxidize on the surface of a clay mineral, it must displace water molecules from that clay mineral’s surface. Detaching a water molecule is a necessary chemical step for attaching arsenic, to be able to oxidize it on the clay mineral surface.

Calculations show that the removal of water from a site with both reduced and oxidized iron uses less energy compared to a site that contains only oxidized iron. Because it uses less energy, it is easier to first attach and then oxidize arsenic on this type of chemical site on clay mineral surface and that’s why the reaction takes place.

Understanding this mechanism helps explain the fate and transport of redox-sensitive nutrients and contaminants in the environment, and why some of these persist in oxidized forms even in the absence of dissolved oxygen.

Ilgen said the team will continue researching the chemical mechanisms that govern the reactivity of iron in different natural minerals and will explore the conditions required for iron to be reactive in soils and sedimentary rocks.

The team will use this knowledge to better understand the environmental fate and transport of contaminants and nutrients, and potentially design reactive barriers to prevent contaminants from entering waterways.