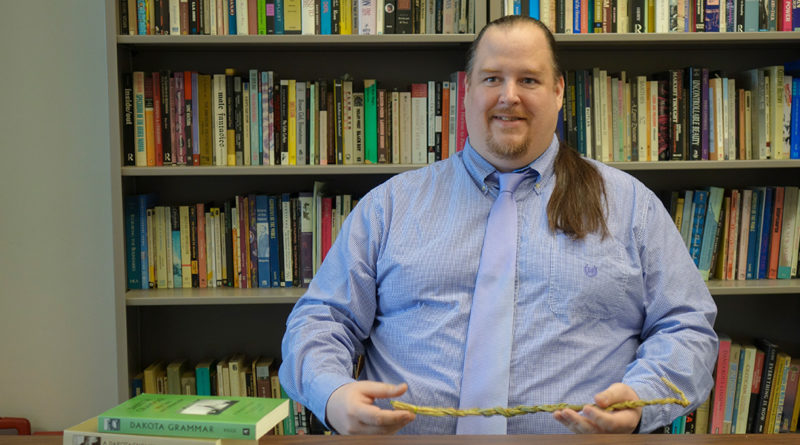 That is the question more communities are considering this year including Washington, D.C., where city council members on Oct. 8 approved legislation to rename the national holiday.

The debate extends beyond the second Monday in October to include the other ways the Italian explorer has been memorialized: with towns, schools, roads and statues named in his honor up for reconsideration.

Camilla Townsend, a history professor in the School of Arts and Sciences at Rutgers University-New Brunswick whose research focuses on the relationship between indigenous people and Europeans throughout the Americas, says there is room for both holidays.

Jameson “Jimmy” Sweet, the first Native American professor in the Department of American Studies, who specializes in Native American and Indigenous studies with a concentration on interactions between American Indians and Euro-Americans, has a different take on the debate.

Here is what they have to say.

Can we recognize Columbus Day and Indigenous Peoples Day in this country or is time running out on Columbus Day as a national holiday?

Camilla Townsend: It seems to me that abolishing Columbus Day will cause more trouble than it resolves and will not change what happened. But we should add an Indigenous Peoples Day and encourage schools to take it seriously, as Canada has done.

Jameson Sweet:  I am Lakota and Dakota, and as an indigenous person, I don’t believe there is any room to commemorate Columbus. Columbus was directly responsible for genocide, rape, enslavement, and the theft of indigenous land, and he set off centuries of colonialism that still exists today. The U.S. is still a colonial nation, indigenous Americans are still a colonized people, and the U.S. continues to limit their rights as sovereign indigenous nations. Many indigenous people (myself included) view Columbus with the same disdain as Hitler, Stalin, or other who committed genocide, and rightfully so.

2) How is Columbus is being discussed in public schools and has that conversation changed in the last decade?

Camilla Townsend: More critical attention has been paid to this issue in our schools in the last 10 years. I find that students graduate thinking that perhaps they shouldn’t celebrate Columbus, but they’re not sure exactly why, and they still know next to nothing about indigenous people’s history. I suppose it is our job as academics to try to give them comprehensible versions of that history based around real figures, units that children are developmentally able to process.

Jameson Sweet: I agree with Professor Townsend that there is much work left to do to educate the public about Columbus, but especially about indigenous people. It falls to us to educate students at Rutgers, but it is also a fault of the K-12 education system where the constructed legacy of Columbus is rarely challenged to any degree and where the history of indigenous people in the U.S. is woefully deficient and always ends in the 19th century.

3) Should monuments, statues, buildings, streets and towns named in honor of Columbus continue to stand? Should they be updated to be more historically accurate and sensitive to indigenous populations?

Camilla Townsend:  With the exception of secessionist civil war leaders (who were traitors to the nation), I don’t believe statues should be taken down. They are a part of our history and trying to erase history never works very well. But we should be adding plaques that explain the complexity of the issues and the pain that is engendered by celebrating only the more powerful figures and not the less powerful. And we should commission more sculptures, this time of indigenous figures, who were so important to history but are often ignored.

Jameson Sweet: I don’t have the same attachment to statues or monuments that most Americans seem to have. I think there are better ways to teach historical events or commemorate people. Memorials to indigenous people are few and far between, and because they usually represent someone in the far past, they uphold the stereotype that indigenous people don’t exist in the 21st century. Nearly all modern representations of Native Americans, whether through sports mascots, brand logos, or artistic representations (or more often cultural appropriations) are as they were in the 19th century or earlier, not as fully modern people. I would rather we focus on those indigenous folks still living, who are activists and are fighting for indigenous rights today.

The American veneration of Columbus was purposefully constructed. Before the American Revolution, many place names honored the British royal family. There were many place names like King’s County, or Kings Town or Kings Road, etc. While some of those names still exist, many were quickly changed to Washington or Columbus to represent an “Americanness,” and demonstrate their independence from Britain. When Columbus was originally placed on a pedestal in the early 19th century, it was done so to portray an independent, non-British history, not out of any real respect for Columbus. To that end, I think we should stop pretending that Columbus deserves any respect or memorialization.

Rutgers University–New Brunswick is where Rutgers, the State University of New Jersey, began more than 250 years ago. Ranked among the world’s top 60 universities, Rutgers’s flagship is a leading public research institution and a member of the prestigious Association of American Universities. It has an internationally acclaimed faculty, 12 degree-granting schools and the Big Ten Conference’s most diverse student body.