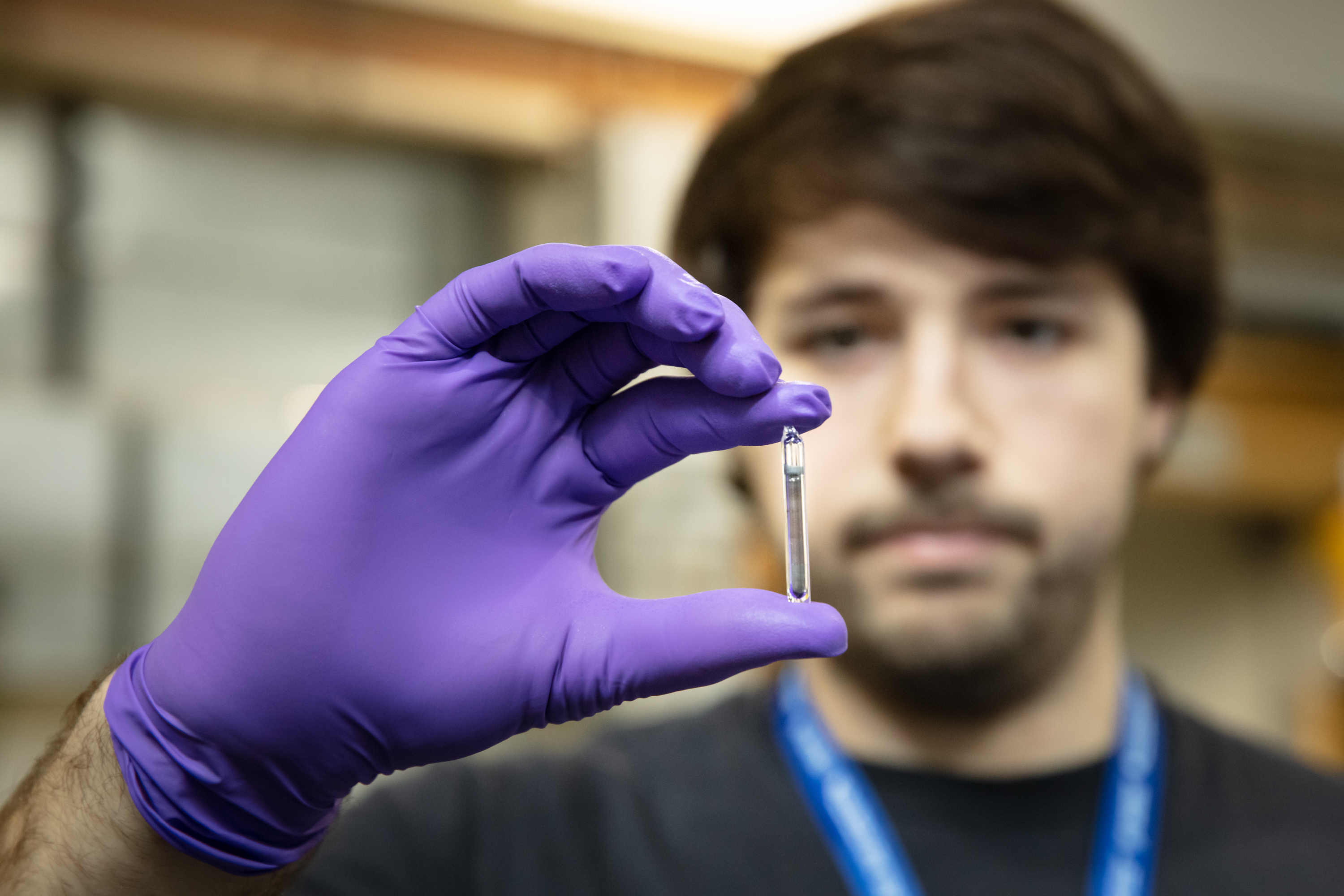 Aiming to make the process more efficient, a team of researchers from Iowa State University is using neutron scattering at the Spallation Neutron Source (SNS), located at the Department of Energy’s (DOE’s) Oak Ridge National Laboratory (ORNL). They already know that metal fluxes like tin and lead can be employed as solvents to promote the reaction of elements to form pure crystalline products. Now, they want to better understand how those metal fluxes interact with other elements when they melt into a single molten compound. If they can identify a correlation between those interactions and the crystalline products that appear after the melt cools, knowing the correlation could lead to improved processes for manufacturing new classes of advanced materials.

“Right now, metal-flux synthesis is an experimental process that uses a lot of guesswork. We’d like to use the data we gather from Oak Ridge to streamline the process,” said Bryan Owens-Baird, a graduate student researcher at Iowa State University and DOE’s Ames Laboratory.

Owens-Baird says metal-flux synthesis is particularly useful for synthesizing substances researchers and manufacturers can’t produce from a direct reaction of elements. Instead, scientists must dissolve reactants in molten metal fluxes like tin and lead. Those fluxes then act as solvents, reducing the liquid compound into new products that crystallize out of the melt as it cools.

“For example, if you heat up and cool down a solution of tin flux with elemental nickel and phosphorus, what you have at the end is still elemental tin, but you formed a nickel phosphide material. The flux acts as a kind of mediator to help crystallize this desired product out of the melt,” said Owens-Baird.

But predicting exactly which products will emerge from the cooling melt is tricky. Owens-Baird explains that researchers don’t entirely understand how the metal fluxes interact with other elements while they are morphing together in the melt. That makes it difficult to use metal-flux synthesis efficiently and requires researchers to rely heavily on their chemical intuition.

“The molten state is like a black box. We just don’t necessarily know about the interactions that are occurring within the melt and whether these interactions are correlated to the products that are crystallized out upon cooling,” said Owens-Baird.

To crack that black box, Owens-Baird and his team are using the Nanoscale-Ordered Materials Diffractometer instrument, or NOMAD, at SNS to observe firsthand how metal fluxes and other elements interact with one another in a molten state. The ability to heat samples to over 2000°F before probing them with neutrons allows the team to track the distances between atoms within the molten compounds as they interact in the melt, and as they crystallize when the compounds cool again to a solid state.

Owens-Baird was first introduced to the NOMAD instrument in 2017 while attending the National School on Neutron and X-ray Scattering, hosted every year by ORNL and Argonne National Laboratory. He said the school helped him develop the expertise needed for his experiment by providing him with knowledge of the beamline’s capabilities and with hands-on experience.

Because neutrons are sensitive to light elements, they enable Owens-Baird and his team to precisely locate specific elements in their compounds, such as phosphorus and silicon.

“The fluxes we’re looking at are tin and lead, which are both relatively heavy and dominate the signal in x-ray based experiments. Neutrons are great because we can still clearly see what those lighter elements are up to, and the scattering intensity is not based on the atomic number,” said Owens-Baird.

Owens-Baird hopes that his team will be able to use the results of their experiment to establish a firm correlation between metal-flux interactions with other elements in the melt and the crystalline products that appear as these metallic compounds transition from melt back to a solid state. Such a correlation may eventually allow other researchers and manufacturers to better employ metal-flux synthesis for generating new advanced solid-state materials quickly and efficiently.

“If this works, and we can locate this correlation, we’ll be laying the groundwork for a really bright future in solid-state chemistry,” said Owens-Baird.

SNS is a DOE Office of Science User Facility. UT-Battelle LLC manages ORNL for DOE’s Office of Science. The Office of Science is the single largest supporter of basic research in the physical sciences in the United States and is working to address some of the most pressing challenges of our time. For more information, please visit https://energy.gov/science.—by Gage Taylor