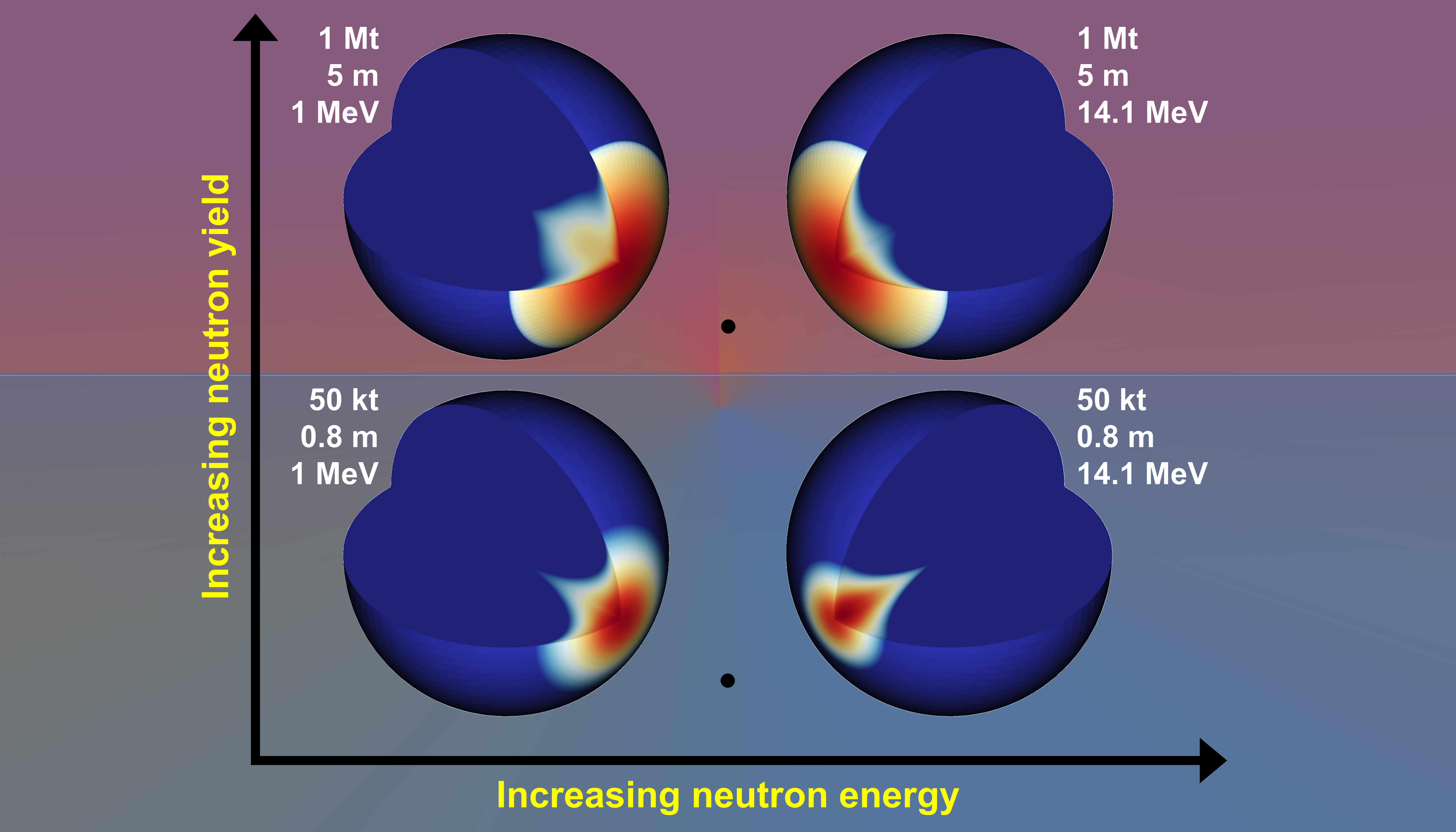 A research collaboration between Lawrence Livermore National Laboratory and the Air Force Institute of Technology (AFIT) investigates how the neutron energy output from a nuclear device detonation can affect the deflection of an asteroid.

Scientists compared the resulting asteroid deflection from two different neutron energy sources, representative of fission and fusion neutrons, allowing for side-by-side comparisons. The goal was to understand which neutron energies released from a nuclear explosion are better for deflecting an asteroid and why, potentially paving the way for optimized deflection performance.

The work is featured in Acta Astronautica and was led by Lansing Horan IV, as part of a collaboration with LLNL’s Planetary Defense and Weapon Output groups during his nuclear engineering master’s program at AFIT. Co-authors from LLNL include Megan Bruck Syal and Joseph Wasem from Weapons and Complex Integration, and the co-authors from AFIT include Darren Holland and Major James Bevins.

Horan said the research team focused on the neutron radiation from a nuclear detonation since neutrons can be more penetrative than X-rays.

“This means that a neutron yield can potentially heat greater amounts of asteroid surface material, and therefore be more effective for deflecting asteroids than an X-ray yield,” he said.

Neutrons of different energies can interact with the same material through different interaction mechanisms. By changing the distribution and intensity of the deposited energy, the resulting asteroid deflection can also be affected.

The research shows that the energy deposition profiles — which map the spatial locations, at and beneath the asteroid’s curved surface, where energy is deposited in varying distributions — can be quite different between the two neutron energies that were compared in this work. When the deposited energy is distributed differently in the asteroid, this means that the melted/vaporized blow-off debris can change in amount and speed, which is what ultimately determines the asteroid’s resulting velocity change.

Horan said there are two basic options in defeating an asteroid: disruption or deflection.

Disruption is the approach of imparting so much energy to the asteroid that it is robustly shattered into many fragments moving at extreme speeds.

“Past work found that more than 99.5 percent of the original asteroid’s mass would miss the Earth,” he said. “This disruption path would likely be considered if the warning time before an asteroid impact is short and/or the asteroid is relatively small.”

Deflection is the gentler approach which involves imparting a smaller amount of energy to the asteroid, keeping the object intact, and pushing it onto a slightly different orbit with a slightly changed speed.

“Over time, with many years prior to impact, even a miniscule velocity change could add up to an Earth-missing distance,” Horan said. “Deflection might generally be preferred as the safer and more ‘elegant’ option, if we have sufficient warning time to enact this sort of response. This is why our work focused on deflection.”

For the energy deposition phase, LANL’s Monte Carlo N-Particle (MCNP) radiation-transport code was used to simulate all of the different case studies that were compared in this research. MCNP simulated a standoff detonation of neutrons that radiated toward a 300 m SiO2 (silicon oxide) spherical asteroid. The asteroid was divided by hundreds of concentric spheres and encapsulated cones to form hundreds of thousands of cells, and energy deposition was tallied and tracked for each individual cell in order to generate the energy deposition profiles or spatial distributions of energy throughout the asteroid.

For the asteroid deflection phase, LLNL’s 2-D and 3-D Arbitrary Lagrangian-Eulerian (ALE3D) hydrodynamics code was used to simulate the asteroid material’s response to the considered energy depositions. The MCNP-generated energy deposition profiles were imported and mapped into the ALE3D asteroid in order to initialize the simulations. The resulting deflection velocity change was obtained for various configurations of neutron yields and neutron energies allowing for the effect of the neutron energy on the resulting deflection to be quantified.

Horan said the work is one small step forward for nuclear deflection simulations.

“One ultimate goal would be to determine the optimal neutron energy spectrum, the spread of neutron energy outputs that deposit their energies in the most ideal way to maximize the resulting velocity change or deflection,” he said. “This paper reveals that the specific neutron energy output can impact the asteroid deflection performance, and why this occurs, serving as a stepping stone toward the larger goal.”

He said if there were to be a plan to mitigate a large incoming asteroid, the energy deposition spatial profile should be accounted for to correctly model the expected asteroid velocity change.

“On the other hand, the energy coupling efficiency is always important to consider, even for low yields against small asteroids,” he said. “We found that the energy deposition magnitude is the factor that most strongly predicts the overall asteroid deflection, influencing the final velocity change more than the spatial distribution does.”

For planning an asteroid mitigation mission, it will be necessary to account for these energy parameters in order to have correct simulations and expectations.

“It is important that we further research and understand all asteroid mitigation technologies in order to maximize the tools in our toolkit,” Horan said. “In certain scenarios, using a nuclear device to deflect an asteroid would come with several advantages over non-nuclear alternatives. In fact, if the warning time is short and/or the incident asteroid is large, a nuclear explosive might be our only practical option for deflection and/or disruption.”