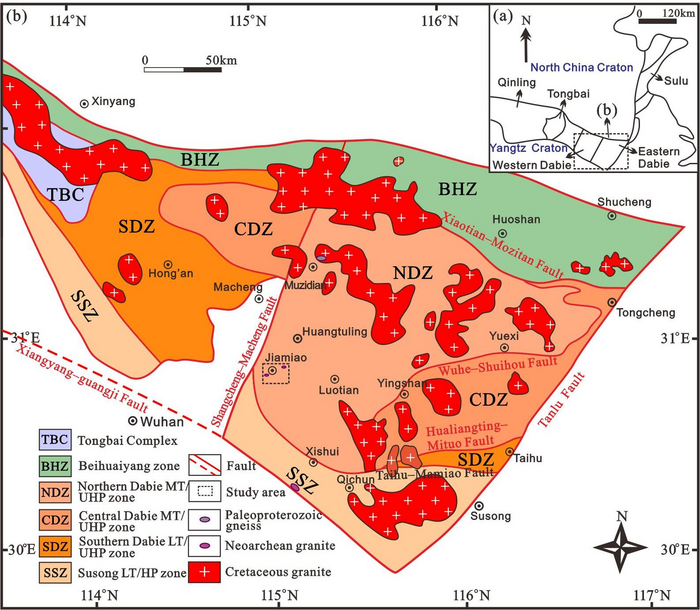 The Archean basement rocks are suitable candidates for modeling the generation and evolution of the early continental crust as they archive the early earth processes in their rock record. However, it is critical to consider the composition and structure of the continental crust, its generation and reworking while deciphering the early earth tectonic regime. The Archean rock exposures are scanty, often eroded during the prolonged denudation processes or strongly overprint due to multiple deformation events and metamorphism. The Archean basement in the Yangtze Craton of South China occurs as sporadic exposures along the northern and southwestern margins of the Craton. Therefore, the identification of the Archean basement is particularly important and significant in understanding the generation and evolution of the Yangtze Craton and the global continental crust.

In recent years, Dr. Yang Tian from the Wuhan Center of Geological Survey, China Geological Survey and Professor Wei Wang from the China University of Geosciences, Wuhan, in collaboration with other colleagues, have carried out detailed geological investigations in the Dabie Orogenic Belt (Fig. 1). Salient findings and new discoveries of their study are: (1) Identification and discovery of late Neoarchean high-K monzogranite, high-K granodiorite and Na-rich granodiorite emplaced at 2645±30 Ma, 2630±37 Ma and 2497±29 Ma, respectively. These age data provide evidence for the 2.7-2.5 Ga magmatism in the Dabie orogenic belt and highlight a much wider areal distribution of basement in the Yangtze Craton than envisaged earlier; (2) Hf-O isotopic analyses of zircons from these newly discovered basement rocks and inference of their being derived from reworking of early crystalline rocks with minor contribution from supracrustal rocks; (3) In combination with the Archean to early Paleoproterozoic basement rocks in the whole Yangtze Craton (Fig. 2), observations on the remarkable changes during the transition from Na-rich to K-rich magmatism, growth patterns of continental crust and the recorded tectonothermal events, while all basement rocks have experienced high-grade metamorphism at ~2.0 Ga. Considering the sporadically preserved 2.05-2.03 Ga Nb rich mafic rocks, ~2.08 Ga arc-related magmatic rocks and 1.96-1.93 Ga syn-collisional granitic and mafic rocks in the northern Yangtze Craton, it has been proposed that the Yangtze Craton may represent an ensemble of several micro continents, which independent early evolution till they amalgamated at ~2.0 Ga, most likely, in response to the assembly of the Columbia supercontinent process. Whether such collision led the formation of a unified Yangtze Craton, needs support from further investigation.

For more details, please refer to the upcoming paper ” Neoarchean granitic rocks from the Jiamiao area of the Dabie orogen: Implications on the formation and early evolution of the Yangtze Craton “to be published in SCIENCE CHINA Earth Sciences, 2022 No.65 issue: https://www.sciengine.com/SCES/doi/10.1007/s11430-021-9935-5.