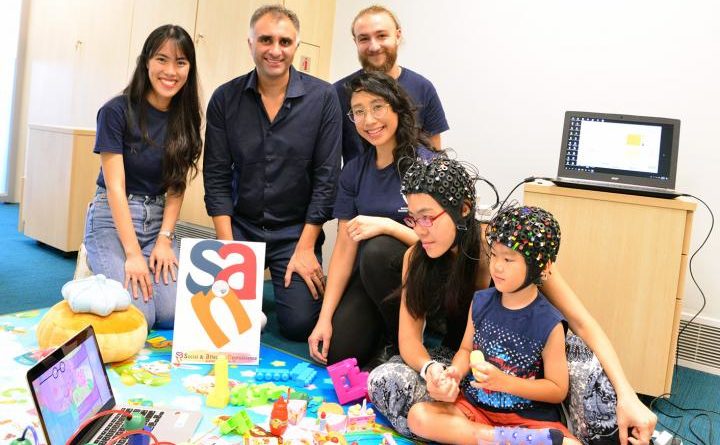 A study led by Nanyang Technological University, Singapore (NTU Singapore) has revealed the effects of the stress of parenting in the brains of both mothers and their children.

The researchers analysed the brain activity of 31 pairs of mother and child from Singapore while they were watching children’s animation clips together.

The specific brain region monitored for synchrony was the prefrontal cortex, which is associated with the ability to understand others’ point of view.

In general, when the parent and child show highly similar brain activity in the same area(s) of the brain (i.e. greater synchrony), it suggests that both are highly tuned in to each other’s emotional states.

Parenting stress occurs when the demands of parenting exceed the coping resources that a parent perceives they have available. Excessive parenting stress can block maternal sensitivity, lead to reactions that punish the child and negatively affect the parent-child relationship for the long term.

Senior author of the research Assistant Professor Gianluca Esposito, from the School of Social Sciences who leads the Social and Affective Neuroscience Lab (SAN-Lab) at NTU Singapore, said, “Our study shows that parenting stress may very well weaken mother-child communication early in the process of social interaction. Our observations likely stem from the stressed mother’s reduced ability to share her child’s perspective. This inability to appreciate the child’s viewpoint may reduce the quality of parental engagement and undermine the mother-child relationship in the long run.”

The study, done in collaboration with researchers from the United States’ National Institute of Child Health and Human Development and Italy’s University of Trento and University of Padova, was published in

How the study was done

The researchers used functional Near-infrared Spectroscopy (fNIRS) caps as a non-invasive way to measure brain activation based on blood concentration levels in the brain. They combined the use of the caps with a recently developed method called tandem hyperscanning that simultaneously records the brain activity of two people.

Before starting the experiment, mothers answered a questionnaire that aims to measure parenting stress. The mother-child pairs then wore the fNIRS caps with the child sitting on the mother’s lap while both watched animation clips from Brave, Peppa Pig and The Incredibles together.

The paper’s first author Ms Atiqah Azhari, a PhD candidate at the SAN-Lab at NTU, said, “Our study brings us a step closer to uncovering how parenting stress weakens the mother-child relationship on a day-to-day basis. We did not expect to find a clear relationship between parenting stress and brain synchrony when the mother and child did something as simple as watching animation together. This suggests that the mother’s mental wellbeing is important for optimal mother-child engagement at the cognitive level.”

The team now intends to study the effects of parenting stress on father-child brain synchrony.

Ranked 11th in the world, NTU has been placed the world’s top young university for the past six years. The University’s main campus is frequently listed among the Top 15 most beautiful university campuses in the world and it has 57 Green Mark-certified (equivalent to LEED-certified) building projects, of which 95% are certified Green Mark Platinum. Apart from its main campus, NTU also has a campus in Novena, Singapore’s healthcare district.

This part of information is sourced from https://www.eurekalert.org/pub_releases/2019-08/ntu-psm082919.php