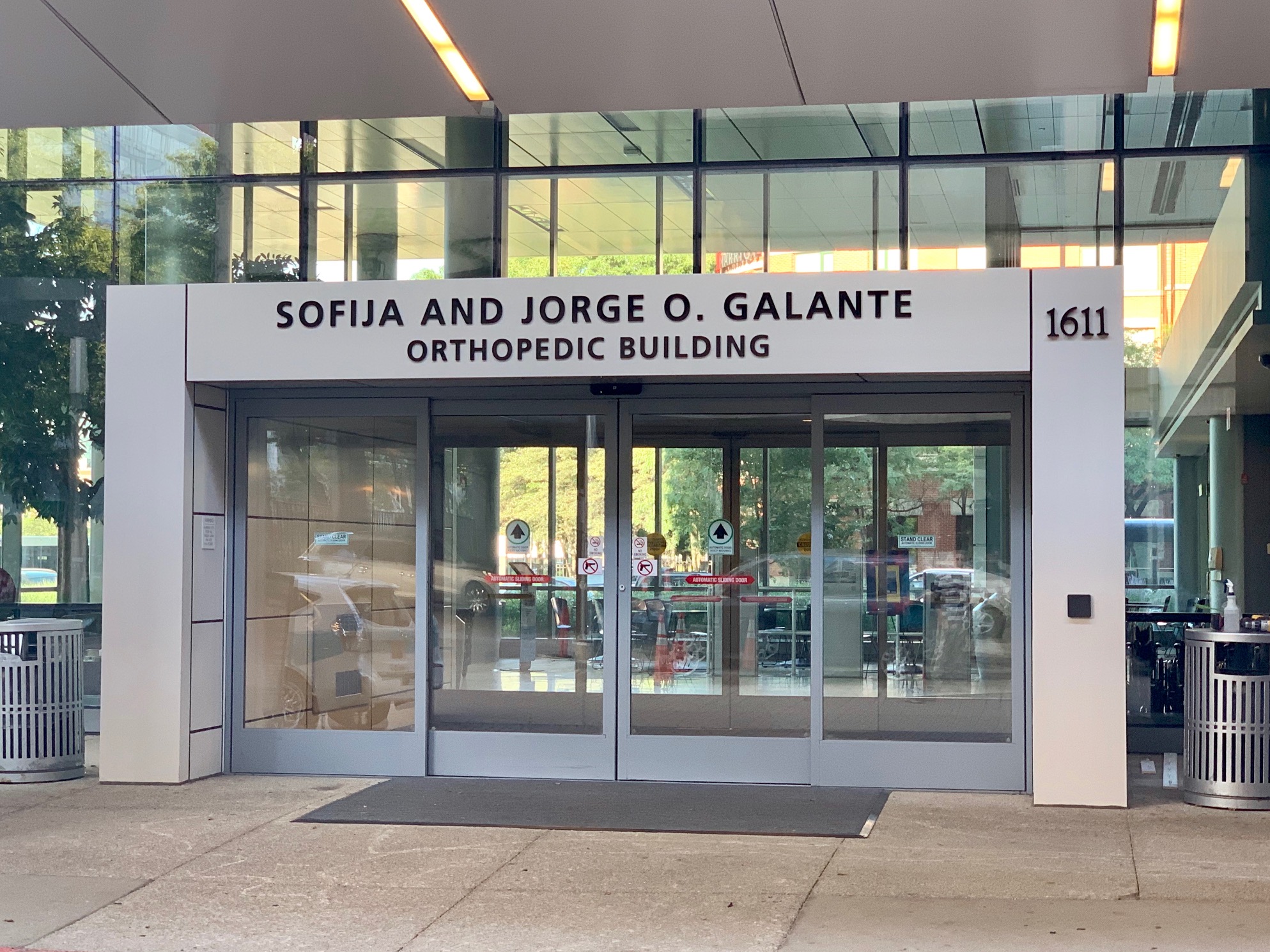 Rush University Medical Center has renamed its orthopedic building The Sofija and Jorge O. Galante Orthopedic Building in recognition of Dr. Jorge Galante’s leadership, his revolutionary contributions to his field and the Galante family’s lasting legacy of philanthropy. A dedication ceremony took place on Aug. 9 in the building, which is located at 1611 W. Harrison St. in Chicago.

Jorge Galante, MD, MDSc, joined Rush in 1972 as the first chairperson of the Department of Orthopedic Surgery, a position he held until 1994. He revolutionized the science of joint replacement during that time. An exceptionally talented surgeon, he nurtured generations of orthopedic surgeons and scientists, many of whom still practice at Rush and around the world. He also established at Rush what is now known as the Joan and Paul Rubschlager Motion Analysis Laboratory.

As a clinical and translational researcher focusing on biomaterials, porous metals and biomechanics, Jorge Galante transformed orthopedic surgery by developing a cementless alternative to joint replacement. His innovation utilized a titanium fiber mesh that, when used as a porous coating on joint replacements, allowed for the growth of adjacent bone into the prosthesis. “It changed the way we do surgery and led to longer lasting joint replacements,” says Joshua Jacobs, MD, the chairperson of orthopedic surgery at Rush since 2008. Known for the strength of his leadership, Jorge Galante was appointed the Grainger Director of the Rush Arthritis and Orthopedics Institute in 1994, becoming Grainger Director Emeritus upon his retirement. He also guided the advancement of Rush University Medical Center through his service on the Board of Trustees, being elected a general trustee in 2003 and later becoming a life trustee in 2013. He continued to serve as both Grainger Director Emeritus and life trustee until his death on Feb. 9, 2017.

Jorge Galante’s efforts advanced his department and his field not only through science and leadership but also through philanthropy. With vision and passion, he inspired donors and funders to invest in the future of bone and joint care. He led by example — the Galante family remains one of Rush’s largest donors. Most recently, a significant gift made in 2018 by the Galante Family Foundation will support Rush University Medical Center’s Department of Orthopedic Surgery, including research, scholarly activities and training within joint replacement and reconstructive surgery. The gift also will support the Joan and Paul Rubschlager Tribology Laboratory, which studies the interaction of human joint surfaces in motion.

Sofija and Jorge Galante married in 1963 and remained together until her death in 2010. Like her husband, Sofija Galante was deeply committed to Rush and to the Department of Orthopedic Surgery and actively supported her husband’s work. According to Sofija and Jorge’s son, Charles Galante, Sofija fostered a culture of family at Rush and created a network of support for surgeons, faculty, fellows, residents, students and their families. “The naming and dedication of Rush’s Orthopedic Building in honor of both my parents is incredibly meaningful to me and my entire family,” says Charles Galante. “My father’s life’s work was enabled by Rush and, while his legacy and the institution of Rush will forever be linked, seeing their names on the building memorializes that link in a wonderfully powerful way.”

Galante’s contributions over the years made Rush University Medical Center home to one of the country’s leading orthopedic programs, which is currently ranked as one of the top programs in the United States and top program in Illinois.

Opened in November 2009 as the first phase of a billion-dollar renovation of Rush’s University Medical Center’s campus on Chicago’s West Side, the Galante Building is home to the outpatient bone and joint care practices of physicians at Rush, as well as a host of supporting laboratories and services. Nearly 10 years later, the five-story, 220,000-square-foot building remains one of the largest orthopedic facilities in the Midwest.