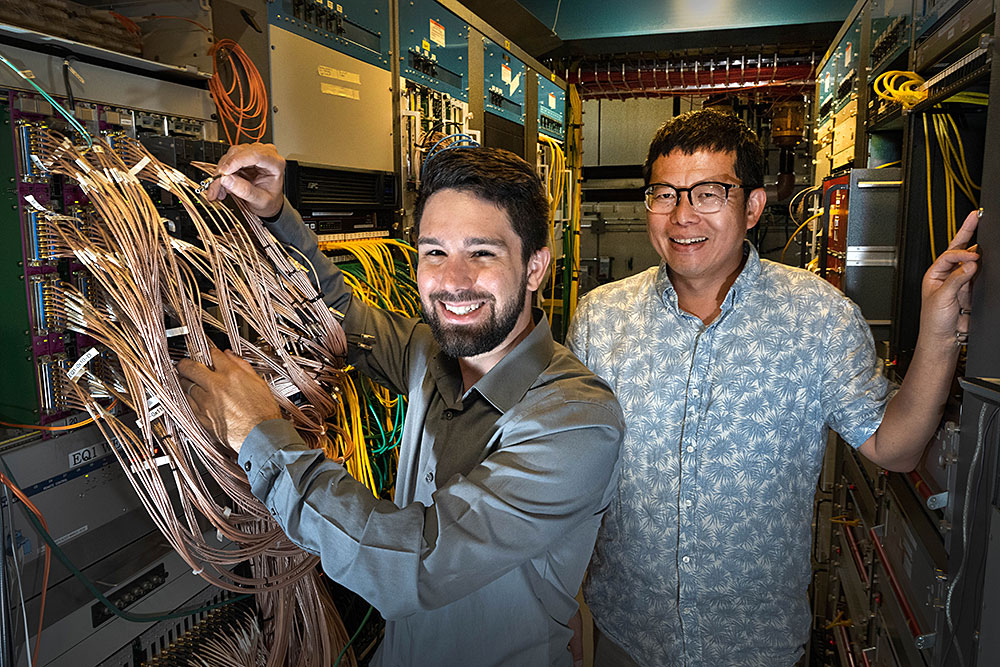 Daniel Brandenburg and Zhangbu Xu at the STAR detector of the Relativistic Heavy Ion Collider (RHIC).

UPTON, NY—Nuclear physicists have found a new way to use the Relativistic Heavy Ion Collider (RHIC)—a particle collider at the U.S. Department of Energy’s (DOE) Brookhaven National Laboratory—to see the shape and details inside atomic nuclei. The method relies on particles of light that surround gold ions as they speed around the collider and a new type of quantum entanglement that’s never been seen before.

Through a series of quantum fluctuations, the particles of light (a.k.a. photons) interact with gluons—gluelike particles that hold quarks together within the protons and neutrons of nuclei. Those interactions produce an intermediate particle that quickly decays into two differently charged “pions” (π). By measuring the velocity and angles at which these π+ and π– particles strike RHIC’s STAR detector, the scientists can backtrack to get crucial information about the photon—and use that to map out the arrangement of gluons within the nucleus with higher precision than ever before.

“This technique is similar to the way doctors use positron emission tomography (PET scans) to see what’s happening inside the brain and other body parts,” said former Brookhaven Lab physicist James Daniel Brandenburg, a member of the STAR collaboration who joined The Ohio State University as an assistant professor in January 2023. “But in this case, we’re talking about mapping out features on the scale of femtometers—quadrillionths of a meter—the size of an individual proton.”

Even more amazing, the STAR physicists say, is the observation of an entirely new kind of quantum interference that makes their measurements possible.

“We measure two outgoing particles and clearly their charges are different—they are different particles—but we see interference patterns that indicate these particles are entangled, or in sync with one another, even though they are distinguishable particles,” said Brookhaven physicist and STAR collaborator Zhangbu Xu.

That discovery may have applications well beyond the lofty goal of mapping out the building blocks of matter.

For example, many scientists, including those awarded the 2022 Nobel Prize in Physics, are seeking to harness entanglement—a kind of “awareness” and interaction of physically separated particles. One goal is to create significantly more powerful communication tools and computers than exist today. But most other observations of entanglement to date, including a recent demonstration of interference of lasers with different wavelengths, have been between photons or identical electrons.

“This is the first-ever experimental observation of entanglement between dissimilar particles,” Brandenburg said.

The work is described in a paper just published in Science Advances.

The house-size STAR detector at the Relativistic Heavy Ion Collider (RHIC) acts like a giant 3D digital camera to track particles emerging from particle collisions at the center of the detector.

Shining a light on gluons

RHIC operates as a DOE Office of Science user facility where physicists can study the innermost building blocks of nuclear matter—the quarks and gluons that make up protons and neutrons. They do this by smashing together the nuclei of heavy atoms such as gold traveling in opposite directions around the collider at close to the speed of light. The intensity of these collisions between nuclei (also called ions) can “melt” the boundaries between individual protons and neutrons so scientists can study the quarks and gluons as they existed in the very early universe—before protons and neutrons formed.

But nuclear physicists also want to know how quarks and gluons behave within atomic nuclei as they exist today—to better understand the force that holds these building blocks together.

A recent discovery using “clouds” of photons that surround RHIC’s speeding ions suggests a way to use these particles of light to get a glimpse inside the nuclei. If two gold ions pass one another very closely without colliding, the photons surrounding one ion can probe the internal structure of the other. 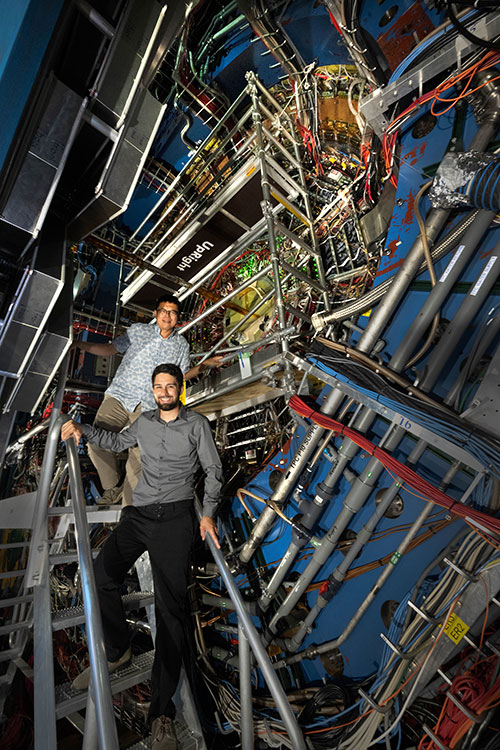 “In that earlier work, we demonstrated that those photons are polarized, with their electric field radiating outward from the center of the ion. And now we use that tool, the polarized light, to effectively image the nuclei at high energy,” Xu said.

The quantum interference observed between the π+ and π– in the newly analyzed data makes it possible to measure the photons’ polarization direction very precisely. That in turn lets physicists look at the gluon distribution both along the direction of the photon’s motion and perpendicular to it.

That two-dimensional imaging turns out to be very important.

“All past measurements, where we didn’t know the polarization direction, measured the density of gluons as an average—as a function of the distance from the center of the nucleus,” Brandenburg said. “That’s a one-dimensional image.”

Those measurements all came out making the nucleus look too big when compared with what was predicted by theoretical models and measurements of the distribution of charge in the nucleus.

“With this 2D imaging technique, we were able to solve the 20-year mystery of why this happens,” Brandenburg said.

The new measurements show that the momentum and energy of the photons themselves gets convoluted with that of the gluons. Measuring just along the photon’s direction (or not knowing what that direction is) results in a picture distorted by these photon effects. But measuring in the transverse direction avoids the photon blurring.

“Now we can take a picture where we can really distinguish the density of gluons at a given angle and radius,” Brandenburg said. “The images are so precise that we can even start to see the difference between where the protons are and where the neutrons are laid out inside these big nuclei.”

The new pictures match up qualitatively with the theoretical predictions using gluon distribution, as well as the measurements of electric charge distribution within the nuclei, the scientists say.

Details of the measurements

To understand how the physicists make these 2D measurements, let’s step back to the particle generated by the photon-gluon interaction. It’s called a rho, and it decays very quickly—in less than four septillionths of a second—into the π+ and π–. The sum of the momenta of those two pions gives physicists the momentum of the parent rho particle—and information that includes the gluon distribution and the photon blurring effect.

To extract just the gluon distribution, the scientists measure the angle between the path of either the π+ or π– and the rho’s trajectory. The closer that angle is to 90 degrees, the less blurring you get from the photon probe. By tracking pions that come from rho particles moving at a range of angles and energies, the scientists can map out the gluon distribution across the entire nucleus.

Now for the quantum quirkiness that makes the measurements possible—the evidence that the π+ and π– particles striking the STAR detector result from interference patterns produced by the entanglement of these two dissimilar oppositely charged particles.

Left: Scientists use the STAR detector to study gluon distributions by tracking pairs of positive (blue) and negative (magenta) pions (π). These π pairs come from the decay of a rho particle (purple, ρ0) — generated by interactions between photons surrounding one speeding gold ion and the gluons within another passing by very closely without colliding. The closer the angle (Φ) between either π and the rho’s trajectory is to 90 degrees, the clearer the view scientists get of the gluon distribution.

Right/inset: The measured π+ and π– particles experience a new type of quantum entanglement. Here’s the evidence: When the nuclei pass one another, it’s as if two rho particles (purple) are generated, one in each nucleus (gold) at a distance of 20 femtometers. As each rho decays, the wavefunctions of the negative pions from each rho decay interfere and reinforce one another, while the wavefunctions of the positive pions from each decay do the same, resulting in one π+ and one π– wavefunction (a.k.a. particle) striking the detector. These reinforcing patterns would not be possible if the π+ and π– were not entangled.

Keep in mind that all the particles we are talking about exist not just as physical objects but also as waves. Like ripples on the surface of a pond radiating outward when they strike a rock, the mathematical “wavefunctions” that describe the crests and troughs of particle waves can interfere to reinforce or cancel one another out.

“The interference is between two wavefunctions of the identical particles, but without the entanglement between the two dissimilar particles—the π+ and π–—this interference would not materialize,” said Wangmei Zha, a STAR collaborator at the University of Science and Technology of China, and one of the original proponents of this explanation. “This is the weirdness of quantum mechanics!”

Could the rhos simply be entangled? The scientists say no. The rho particle wavefunctions originate at a distance 20 times the distance they could travel within their short lifetime, so they cannot interact with each other before they decay to π+ and π–. But the wavefunctions of the π+ and π– from each rho decay retain the quantum information of their parent particles; their crests and troughs are in phase, “aware of each other,” despite striking the detector meters apart.

“If the π+ and π– were not entangled, the two π+ (or π–) wavefunctions would have a random phase, without any detectable interference effect,” said Chi Yang, a STAR collaborator from Shandong University in China, who also helped lead the analysis for this result. “We wouldn’t see any orientation related to the photon polarization—or be able to make these precision measurements.”

Future measurements at RHIC with heavier particles and different lifetimes—and at an Electron-Ion Collider (EIC) being built at Brookhaven—will probe more detailed distributions of gluons inside nuclei and test other possible quantum interference scenarios.

This work was funded by the DOE Office of Science, the U.S. National Science Foundation, and a range of international agencies spelled out in the published paper. The STAR team used computational resources at the RHIC and ATLAS Computing Facility/Scientific Data and Computing Center at Brookhaven Lab, the National Energy Research Scientific Computing Center (NERSC)—a DOE Office of Science user facility at Lawrence Berkeley National Laboratory—and the Open Science Grid consortium.