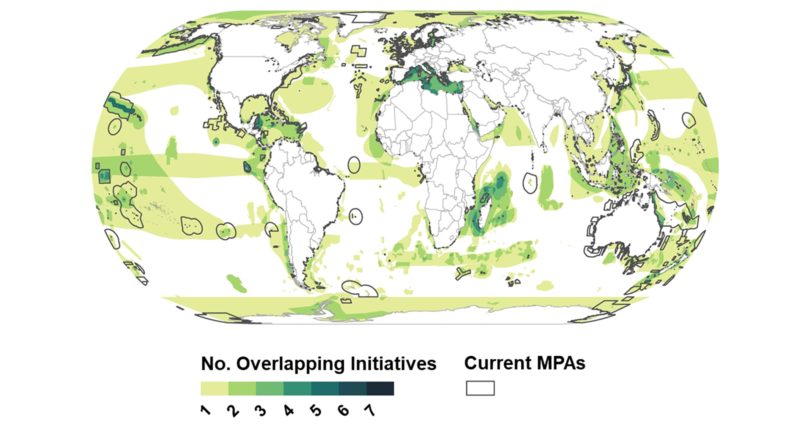 STONY BROOK, NY, October 25, 2019 — The largest synthesis of important marine areas conducted to date reveals that a large portion of earth’s oceans are considered important and are good candidates for protection. A first of its kind, the study was conducted by a multidisciplinary team of researchers including Ellen Pikitch, PhD, and Christine Santora of Stony Brook University and Dr. Natasha Gownaris, a PhD graduate of Stony Brook University. The team examined 10 diverse and internationally recognized maps depicting global marine priority areas. The findings, published in Frontiers in Marine Science, may serve as a roadmap for the goal set by the United Nations to create 10 percent of the ocean as marine protected areas (MPAs) by 2020.

There are numerous ongoing United Nations and nongovernmental initiatives to map globally important marine areas. Such areas may be identified because of their high biodiversity, threatened or vulnerable species, or relatively natural state. Criteria used for mapping vary by initiative, resulting in differences in areas identified as important. This paper is the first to overlay mapping initiatives, quantify consensus, and conduct gap analyses at the global scale.

The analysis found that 55% of the ocean has been identified as important by at least one of the mapping initiatives (58% of this area is within national jurisdiction and 42% is in the high seas). More than 14% of the ocean was identified as important by between two and four maps, and a gap analysis showed that nearly 90% of this area is currently unprotected. The largest of these important but unprotected areas were located in the Caribbean Sea, Madagascar and the southern tip of Africa, the Mediterranean Sea, and the Coral Triangle region. Nearly all area identified by five or more maps is already protected as reported by the World Database on Protected Areas. Most (three quarters) nations protect less than 10 percent of the identified priority areas within their exclusive economic zones (EEZs).

“An enormous area of the ocean has already been identified as important by scientists and conservationists but remains unprotected,” said Pikitch, Endowed Professor of Ocean Conservation Science in the School of Marine and Atmospheric Science (SoMAS) at Stony Brook University. “Opportunities for further ocean conservation are widespread and include areas within the national jurisdictions of most coastal states as well as the high seas.”

Based on the team’s analysis of the 10 maps, Pikitch explained that the goal to protect 10 percent of the oceans by 2020 could be met solely through the actions of coastal states. If all the unprotected ocean area identified as important by two or more initiatives were to be protected by 2020, an additional 9.34 percent of the ocean would be added to the global MPA network.

In addition, more than 76 million km2 of areas beyond national jurisdictions were identified as important and unprotected. This finding, she added, may therefore inform ongoing discussions about protection of the high seas.

The investigators also used biogeographic classification to determine whether current protection of important areas was ecologically representative. They found it was not, as only half of all 99 ocean provinces protect at least 10 percent of their identified area. This, they point out, suggests the need for improvement in creating an ecologically representative global MPA network.

“This study can help guide placement of future MPAs to meet agreed objectives for the quantity, quality and representativeness of the global network of marine protected areas,” Pikitch emphasized. “Local studies and expertise will also be necessary to implement this process.”

About Stony Brook University Stony Brook University, widely regarded as a SUNY flagship, is going beyond the expectations of what today’s public universities can accomplish. Since its founding in 1957, this young university has grown to become one of only four University Center campuses in the State University of New York (SUNY) system with over 26,000 students, more than 2,700 faculty members and 18 NCAA Division I athletic programs. Our faculty have earned numerous prestigious awards, including the Nobel Prize, Pulitzer Prize, Indianapolis Prize for animal conservation, Abel Prize and the inaugural Breakthrough Prize in Mathematics. The University offers students an elite education with an outstanding return on investment: U.S.News & World Report ranks Stony Brook among the top 40 public universities in the nation. Its membership in the Association of American Universities (AAU) places Stony Brook among the top 62 research institutions in North America. As part of the management team of Brookhaven National Laboratory, the University joins a prestigious group of universities that have a role in running federal R&D labs. Stony Brook University fuels Long island’s economic growth. Its impact on the Long island economy amounts to $7.38 billion in increased output. Our state, country and world demand ambitious ideas, imaginative solutions and exceptional leadership to forge a better future for all. The students, alumni, researchers and faculty of Stony Brook University are prepared to meet this challenge.