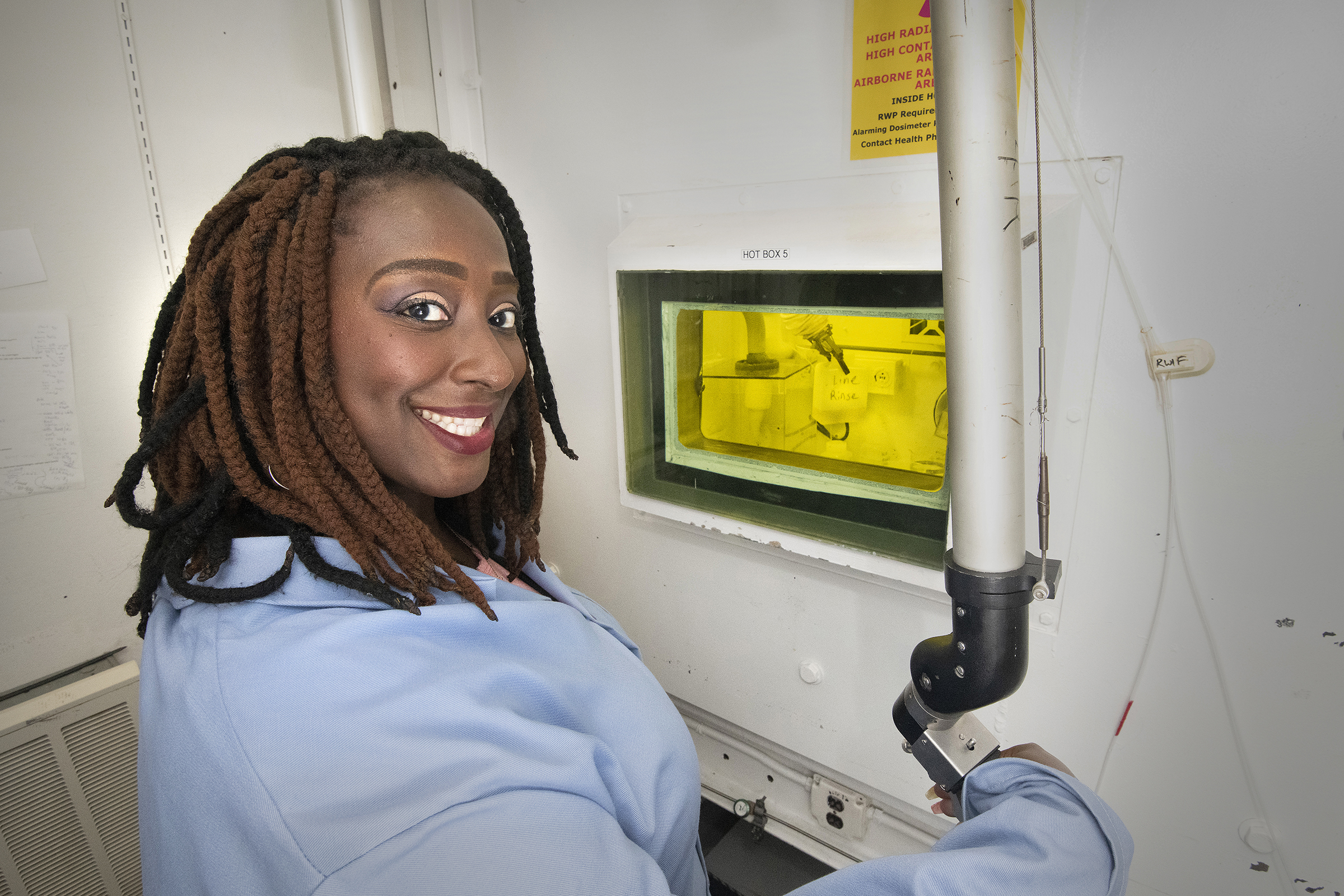 “I was getting bored with my pre-med classes and my mentor suggested looking at chemistry,” she said. She was a junior at Florida Memorial University (FMU), and her dad’s diagnosis helped drive the switch. “I was thinking that instead of becoming a doctor, I would be a pharmaceutical researcher. I could help a lot of people if I were able to contribute to a treatment or a cure.”

Flash forward to Sanders becoming the first African American woman in the U.S. to earn a Ph.D. in the field of radiochemistry—the chemistry of radioactive elements—and her current work in a cutting-edge area of radiochemistry research known as “theragnostics.”

As the name implies, theragnostics are drugs designed to be both therapeutic and diagnostic. They consist of delivery systems that can hold either of two chemically related radioactive isotopes—forms of chemical elements that emit radiation as they decay. One isotope emits energy that can be picked up by imaging cameras—positron emission tomography (PET) scanners—to identify where cancer cells lurk, help doctors determine treatment options, and also track a patient’s response to treatment. The therapeutic isotope delivers a radioactive dose to destroy diseased cells.

“The idea is to interchangeably use those two isotopes because of the similarity in their chemistry,” Sanders said. “You would essentially have one drug and switch out the radioisotope and still have the same delivery agent to use for both imaging and treatment.”

Brookhaven Lab has a rich history in the development and use of medical isotopes. And thanks to the particle accelerators that drive the Lab’s nuclear physics research program, it’s one of the few places in the U.S. that can produce certain isotopes today. Both played a role in bringing Sanders to the Lab.

“At FMU, during my junior year, my school won a grant to introduce radiochemistry to undergraduate students, and I was asked to be a part of that first cohort,” she said. The program included classes and a summer research opportunity at the University of Texas (UT), Austin, research reactor.

“Our research project was focused on using gamma ray analysis to detect different materials—building a database so agencies could use our data to analyze unknowns when searching something like a submarine,” she said. “It was fascinating, and that really got me into nuclear and radiochemistry.”

The scientists she worked with at UT introduced her to Ken Czerwinski, who would become her graduate advisor in radiochemistry at the University of Nevada, Las Vegas (UNLV). Czerwinski’s research was centered around the chemical element technetium (Tc).

“Technetium-99m is one of the most widely used radioisotopes in the medical field, used for diagnostic imaging, and the Tc-99m generator that made it so widely available was developed at Brookhaven Lab, so of course I learned all about that history,” Sanders said. From that point on she was hooked: “My mission was to come to Brookhaven.”

Sanders began her work on theragnostics through a collaboration between UNLV, Hunter College of the City University of New York, and Memorial Sloan Kettering Cancer Center (MSKCC) as part of a National Science Foundation Integrative Graduate Education Research Traineeship (IGERT) program in radiochemistry. This unique fellowship allowed Sanders to conduct her research at Hunter and MSKCC where she was able to evaluate her Tc-99m complexes as the imaging component of her theragnostic agents in biological environments.

“I was trying to find new ways to attach Tc-99m to novel small peptide chains that could serve as a ‘targeting system’ for holding the isotope and delivering it quickly to cancer cells for imaging before the isotope decayed.”

An earlier idea was to attach Tc-99m directly to antibodies aimed at cancer cells. But antibodies are big molecules, which can take up to several days for delivery, sometimes leaving too little radioactivity for imaging at the intended target. Instead, while working in the lab of Lynn Francesconi (Hunter College) and Jason Lewis (MSKCC), Sanders designed her small complexes to have a high affinity for the tail ends of modified antibodies. That way, she could inject the large antibodies first, let them bind to the cancer cells, then inject the smaller drugs containing the imaging agent and let them find their way to cancer-bound antibodies—a technique known as pre-targeting.

As an IGERT fellow, her graduate research focused on understanding the chemical interactions between the metal complex and the antibodies it bound to. The ultimate aim was to use Tc-99m for imaging, then replace it with rhenium-188, which has very similar chemistry but emits cell-killing beta particles, so the exact same complex (peptide chain) could be used to deliver a cancer-zapping dose.

“What makes a particular isotope good for diagnosis vs. therapy is the type of particle it emits when it decays,” Sanders said. Identifying partner isotopes for these theragnostic drugs and optimizing their delivery remains a primary focus of Sanders’ work at Brookhaven Lab.

Sanders first met Cathy S. Cutler, head of Brookhaven’s MIRP program, while completing her Ph.D. research at Hunter College. “Cathy gave a guest seminar there, and when a postdoc opportunity came up, I jumped on it,” Sanders said.

At Brookhaven, she began a project looking for ways to optimize the delivery of arsenic-72 (As-72) to cancer cells.

“Arsenic is very scary to some people,” Sanders admits. “But the amounts we use are so low, far below the threshold that would make you sick, that it is not a problem. And it has very good properties as an imaging tool.”

And in this case, there’s another form of arsenic, As-77, that can be used for the therapeutic part of a theragnostic drug.

“This is ideal because the chemistry of the two is exactly the same; they are the same element with the same chemical properties,” Sanders said.

Right now, Sanders is working with collaborators at Memorial Sloan Kettering Cancer Center who are looking at using the pair for diagnosis and treatment of gastric cancer. But Sanders says the approach can be used more broadly by varying the biomolecules used for targeting.

Working on cell studies, the team has shown that “our chemistry used to attach arsenic to the antibody doesn’t destroy the affinity of the antibody for the cancer cells. And we’ve collaboratively performed imaging studies to show that we achieve localization at the cancer site with low radiation doses to non-target cells,” Sanders said.

Sanders joined Brookhaven as a full-time staff member in MIRP in April 2019. In addition to continuing some of her earlier projects, she is working on “generators” for potentially useful theragnostic isotopes, such as As-72 and scandium-44. These generators provide a portable means of getting useful isotopes to hospitals in areas that are not close to cyclotrons or accelerators.

“These are similar to the Tc-99m generator developed here at Brookhaven, but each has its own challenges,” Sanders said.

She works with Cutler and other staff at the Brookhaven Linac Isotope Producer (BLIP) as part of the DOE Isotope Program to produce and cleanly separate desired isotopes, create relatively stable forms for transport in generators, and ensure that only medically pure product goes into patients.

“A major focus of the field of radiopharmaceuticals is ‘personalized medicine.’ When it comes to cancer and other diseases, we know that not every treatment will work in every patient. So, we’re seeking novel isotopes, novel delivery methods, and novel chelators (the metal complexes) so that doctors can tailor the best treatment for you,” she said.

She also sees the growing field as an opportunity to build on Brookhaven’s legacy in nuclear medicine.

“There’s great work being done here. And this is an amazing area of the country for this type of research. With proximity to Memorial Sloan Kettering, Stony Brook University, the City University of New York, and even Cold Spring Harbor Laboratory, it’s a prime opportunity for Brookhaven to be at the epicenter. It’s a field that requires understanding of so many different areas of science, and we have it all here,” Sanders said.

Though, her dad passed away in 2010, she still hopes to someday apply her expertise to research on Alzheimer’s and other brain diseases.

When she’s not in the lab, Sanders likes to play basketball, a sport she excelled at in college. She’s active in her sorority, Zeta Phi Beta Sorority Incorporated, and the African American Advancement Group at Brookhaven Lab. And she enjoys talking with kids and mentoring students.

“I tell them my story and try to encourage them, especially girls, to get into the sciences. That’s a growing passion of mine—understanding that I’m not the norm, and allowing younger girls and especially minority girls to see someone like me, to know that they can be a scientist—because I didn’t have anybody that looked like me in my field. Seeing their faces when they’re like, “Wait, what? You’re a scientist?”—that’s really fulfilling,” she said.

Sanders’ work in MIRP is funded by the DOE Office of Science.