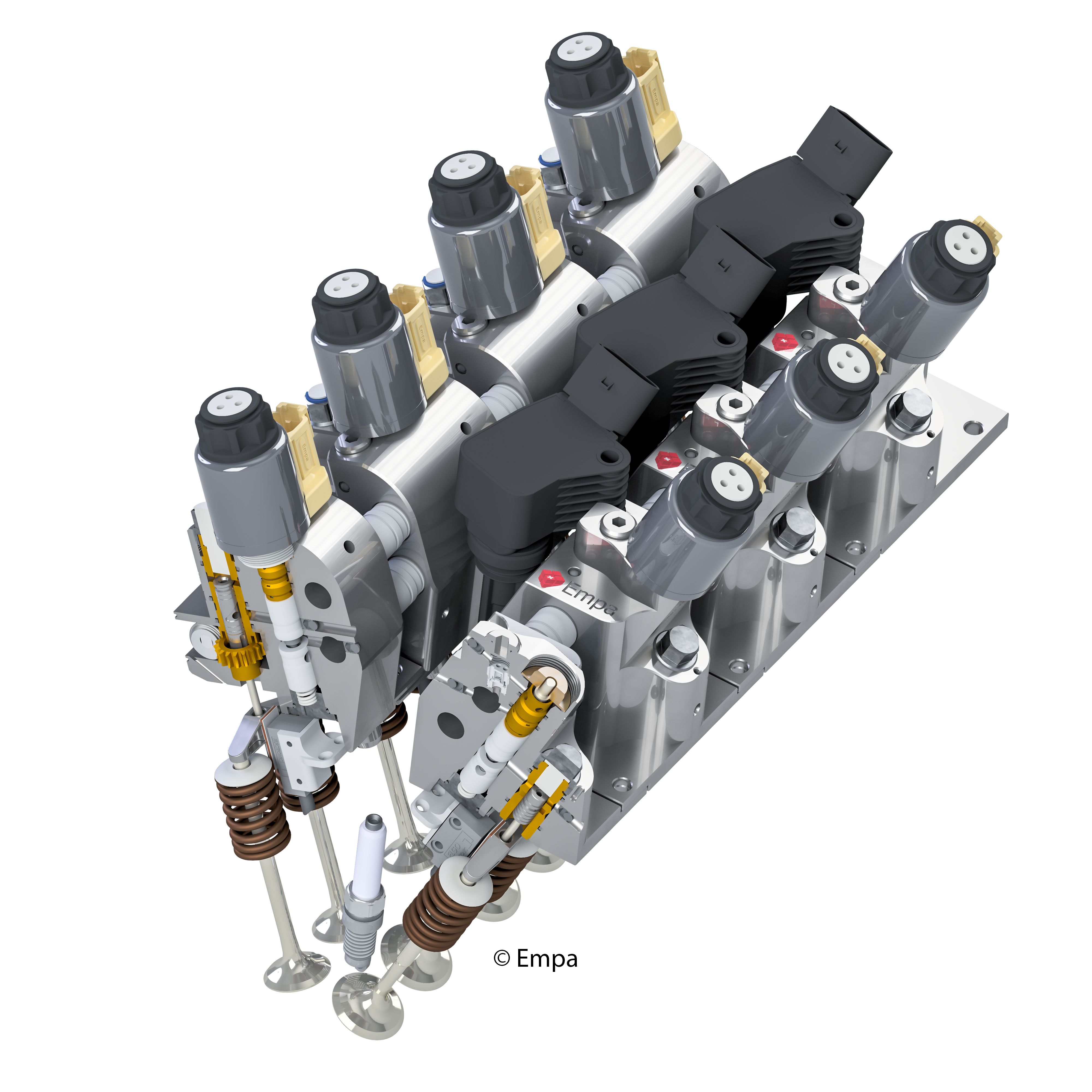 The valve train is the “respiratory organ” of combustion engines: it manages the aspiration of fresh air and the discharge of exhaust gases, which is referred to as “gas exchange”. Today, only mechanically driven camshafts are used in series production for this purpose, often equipped with an additional mechanism, some of which are quite complex. This allows to modify a valve movement pattern given by the camshaft, which is not possible without an increase in friction. At the same time, flexibility is not given to the desired extent. What is in demand – among other things for adaptation to changing fuel properties – are fast valve movements even at low speeds, stroke adaptations and cylinder-selective widely variable valve timing.

Patrik Soltic and his team at Empa’s Automotive Powertrain Technologies laboratory, together with hydraulics specialist Wolfgang Schneider, invented and developed an electrohydraulic valve train that is significantly more flexible than today’s series production technology. The valves are actuated hydraulically and controlled electrically via a solenoid coil. As soon as a control current flows, a specially designed hydraulic valve opens, allowing hydraulic fluid to open the gas exchange valve to the desired extent in milliseconds counter to a spring. When the current is switched off, the gas exchange valve is closed again by the spring force and feeds a large part of the hydraulic energy required for opening back into the hydraulic system. The system achieves a significantly lower energy requirement over a wide operating range compared to camshaft-driven systems. Together with an optimized gas exchange, the fuel consumption of the test spark-ignition engine is about 20 percent lower than with conventional valve control using a throttle in combination with camshafts in the low load range typical for passenger cars.

By selecting the operating parameters, the opening and closing times as well as the valve lift for each cylinder can be chosen completely unrestricted. This means that each engine operating condition can be varied from cycle to cycle, for example by intelligent load control, by selecting the residual gas quantity remaining in the cylinder (exhaust gas recirculation), or by deactivating unneeded cylinders without the driver noticing. This makes the engine highly adaptable to new renewable fuels: Oxygen-containing fuels such as methanol or ethanol, for example, allow more residual gas to remain in the cylinder. Natural gas, biogas and syngas generated from wind and solar power offer increased anti-knock properties, and the valve train can react flexibly to this as well. In addition, alternative combustion concepts can also be implemented comparatively easily, for example homogeneous self-ignition: a fuel-air mixture is ignited at the right moment without ignition sparks by setting the correct conditions towards the end of compression. The mixture is combusted almost without pollution.

Another speciality of the system set up at Empa is the choice of hydraulic fluid: instead of using oil as usual, a water-glycol mixture, i.e. engine cooling water, can be used. Due to its physical properties, this medium is very suitable for fast-switching hydraulic systems, as it is very stiff and therefore creates fewer hydraulic losses. This makes the cylinder head completely oil-free, which can allow a cheaper engine oil with extended change intervals to be used for the rest of the engine.

As part of the “FlexWork” project funded by the SFOE, the new valve train was put into operation in a passenger car engine powered by natural gas and derived from a VW 1.4l TSI engine. The required components were manufactured by Empa’s own workshop. The control system for the test engine was developed by the Empa researchers themselves. The valve train has been running on an Empa engine test bench since October 2018 and has already survived many millions of cycles in fired engine operation flawlessly.

The FlexWork valve control needs only low-cost components. No expensive, very fast switching valves and no complex sensors are required. The valve train system was presented to technical experts in the magazine MTZ Worldwide on August 16. Empa is in discussions with engine manufacturers for the transfer of this technology, which is suitable not only for combustion engines but also for compressors.