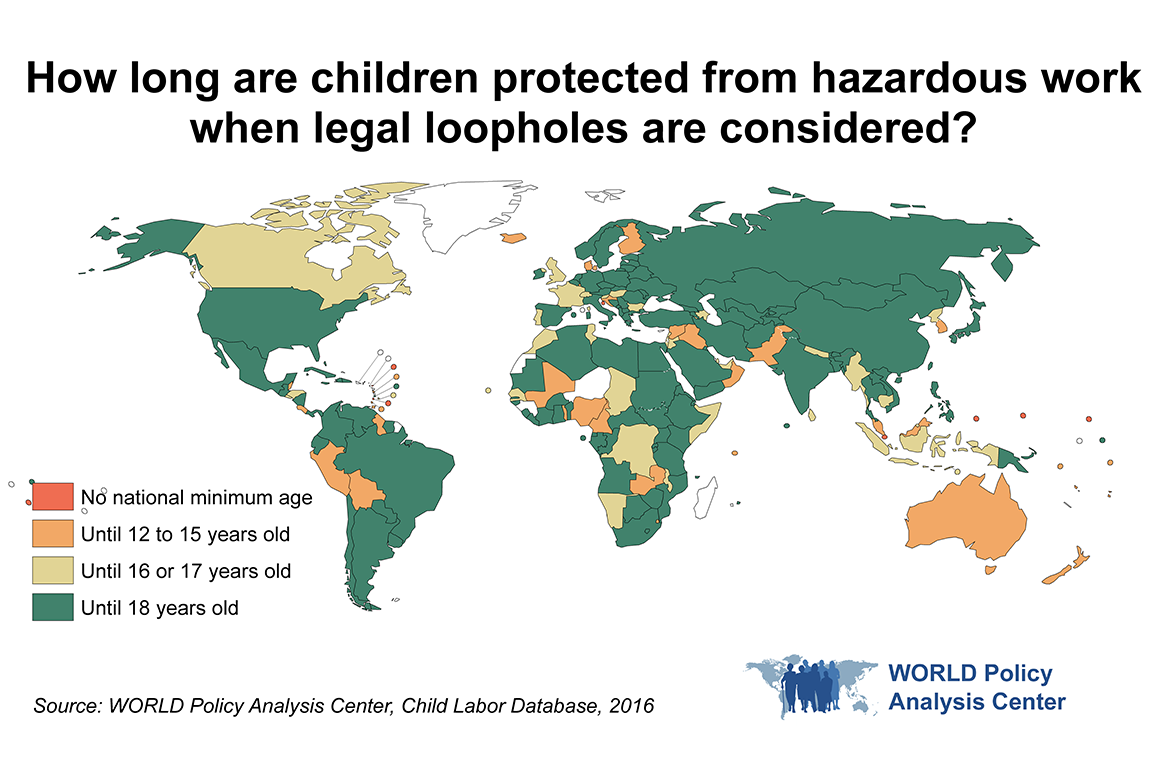 Published today in the International Journal of Sociology and Social Policy, WORLD’s analysis revealed that 41 countries do not protect children and youth under the age of 18 from performing hazardous work — a number that rises to 74 when legal loopholes are taken into account — including, for example, such populous nations as Nigeria and Indonesia. In 47 countries, the minimum legal age for employment is below 15, despite evidence that work at an early age is associated with negative health and education outcomes — and when factoring in legal loopholes, that number rises to 85. Among the countries that allow children younger than 15 to work are Bolivia, where it is estimated that one quarter of all 5- to 14-year-olds are performing labor; Benin, where approximately half of all 5- to 14-year-olds are in child labor; and Nepal, where an estimated 37% of 5- to 14-year-olds are working.

The study also found that 41 countries do not protect 14-year-olds from working six or more hours on a school day, and 84 countries do not legally guarantee that 16-year-olds have at least 12 hours off from work in a day, leaving children and youth with little time for rest, study, and sleep. An economically diverse group of countries fall into one of these two categories, including Russia, Mexico, Israel, Japan and Zimbabwe.

“There is no justification for ever allowing children to perform hazardous work,” said Dr. Jody Heymann, senior author of the study, founding director of the WORLD Policy Analysis Center and a distinguished professor in the UCLA Fielding School of Public Health. “While countries around the world have recognized this, we still have a long way to go to ensure that the laws are in place at a national level to protect all children from these types of jobs.”

“While part-time work in a clean and safe environment and jobs that provide vocational training for adolescents can sometimes be beneficial, there is widespread agreement about the negative consequences of work at an early age,” added Nicolas de Guzman Chorny, lead author of the study. “Evidence shows that when children and youth work more than a few hours, or in conditions that expose them to hazards, it can be extremely detrimental to their development, educational achievement and health, in ways that are nearly impossible to overcome in the long term.”

Worldwide in 2016, there were an estimated 152 million child laborers ages 5 to 17, with 73 million of them engaged in hazardous work, according to the International Labour Organization (ILO). Child labor exists in countries of all income levels and across all regions. Africa was the continent with the highest number of child laborers (72.1 million), as well as the highest proportion of children under 18 who worked (20%). Worldwide, the majority of child laborers (71%) worked in the agricultural sector, while 17% worked in the service sector and 12% worked in goods-producing industries. Close to one-in-three child laborers ages 5 to 14 did not attend school.

Research from multiple countries has found that child labor is associated with fewer years of education completed. Engaging in labor at an early age is associated with lower school attendance and academic achievement. Studies from around the world have also documented the negative health impacts of child labor, including increased risk of injury, poor mental health, and verbal, physical, and sexual abuse. Additionally, the health effects of working at an early age result in an increased likelihood of experiencing poor health outcomes as adults.

The ILO’s Minimum Age Convention (Convention 138, or C138), adopted in 1973 and ratified by 169 UN member states as of 2016, requires countries to establish national policy frameworks to abolish child labor and increase the minimum age for employment in national laws. Despite these commitments, the WORLD study noted that there has been little transparency and accountability around whether countries have followed through with legislation protecting children from potentially harmful work.

WORLD’s analysis assessed the legislation of all 193 UN member states related to work that is likely to be hazardous, work that interferes with children’s education, and work that is harmful to their healthy development. Among the other findings:

The researchers found that for the vast majority of measures that were examined, countries that have ratified C138 have stronger legal protections for child labor than those that have not.

“Fully implemented national legislation providing protection without exceptions, especially against hazardous work and work that interferes with education and healthy development, remains foundational to reducing the rate and impact of child labor,” de Guzman said. “Our analysis indicates that many countries have not taken this critical step.”

Heymann noted that anti-poverty policies are also vital to that strategy. Minimum and living wage policies for adults, for example, can assist families in achieving economic security without depending on their children for income. Bans on child labor can also complement poverty-reduction efforts, by keeping children in school and thereby increasing their earning potential as adults.

“While laws alone are only a first step, and implementation and enforcement are essential, we will not achieve meaningful progress without bans on child labor,” Dr. Heymann said.