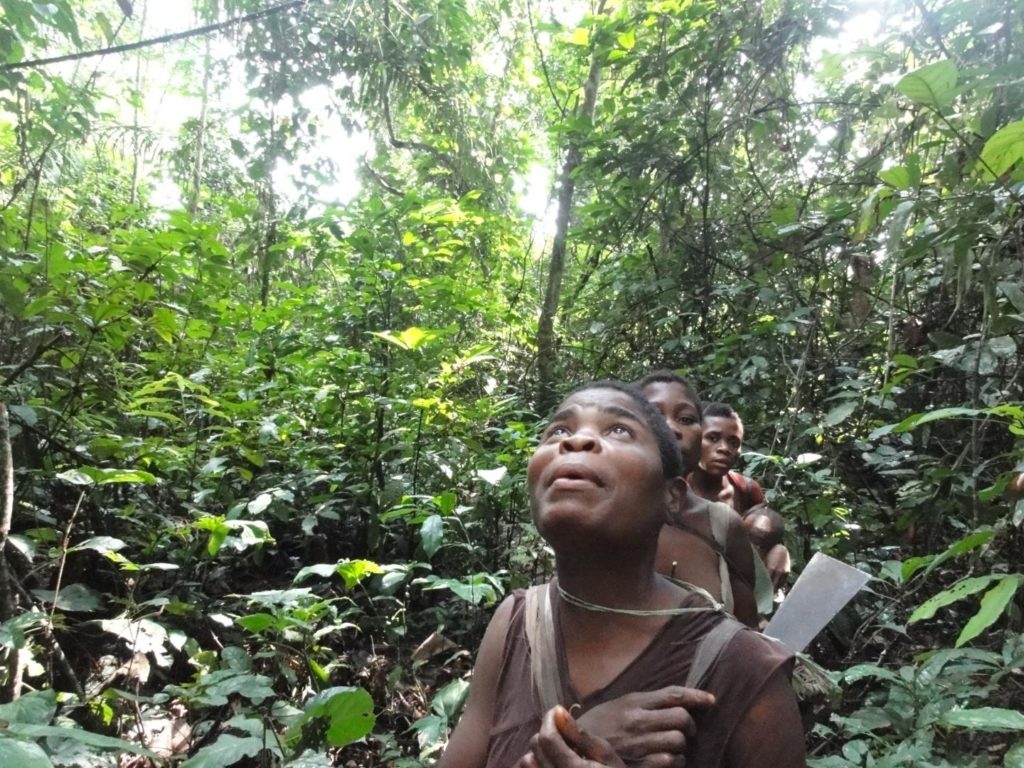 The human ranging style is unique among hominoids. The Mbendjele BaYaka people move from camp to camp every few months, and thus have a large lifetime range of approximately 800 square meters. Human foragers collect food and take it back to their camp to process and share. Furthermore, the Mbendjele BaYaka have created a trail system and walk mostly on trails. In contrast, one of our closest living relatives, chimpanzees, live in a relatively smaller area (25 square meters) and spend most of their adult lives within the same home range.

Chimpanzees consume food as they encounter it and make sleeping nests at variable locations within their home range. In addition, chimpanzees (especially, the chimpanzees living in the Taï National Park, Ivory Coast, where this research was conducted) rarely use the same paths when travelling on the ground. These different ranging styles between humans and chimpanzees might shape their different spatial experience and thus the way they travel through the forest to find food in their natural habitats.

Haneul Jang and her colleagues from the Max Planck Institute for Evolutionary Anthropology set out to study how human foragers and chimpanzees compare in their spatial movement patterns in similar rainforest environments. To this aim, the researchers measured travel linearity and speed of five Mbendjele BaYaka women from the Republic of Congo and five female chimpanzees from Taï forest when they travelled off-trail areas to out-of-sight food locations during their daily search for food in the rainforest.

“One possible explanation of these differences can be their different ranging style. The Mbendjele BaYaka people stay in several seasonal camps in their lifetime range, and walk 90 percent of their travel distance on human-made trails during their foraging trips in the forest. They may therefore have less experience in less familiar off-trail areas. Hence, when the Mbendjele BaYaka people forage in these areas, their travel linearity decreases due to their searching effort”, says Haneul Jang, lead author of the study. On the contrary, chimpanzees decreased travel linearity and speed in more familiar areas. “Since chimpanzee groups can be highly hostile towards each other, they might need to travel more efficiently and faster in less familiar areas, where they are more likely to encounter other chimpanzee groups”, says Jang.

In addition, Jang and her colleagues found that travel linearity increased in the Mbendjele BaYaka people and decreased in Taï chimpanzees when they travelled in a larger as compared to a smaller foraging group. “When I followed the chimpanzees, I often saw them wait for each other and have apparent disagreements about where to go”, says Karline Janmaat, the main supervisor of the study. “With more individuals joining the group, disagreement seemed to increase. It is therefore perhaps not surprising that when group size increased, their travel became less linear. For the Mbendjele BaYaka people we found the opposite pattern. This can have many reasons, but I like to think that it is because humans can discuss, evaluate and eventually agree about where the best food sources are, by using language, and that this helped them to travel more efficiently.”